David John Leckie (4 May 1951 –20 July 2021) was an Australian media manager, best known as a network television executive; he served as the chief executive officer of Seven West Media from 2003 to 2012 [1] and previously at the Nine Network for more than 20 years.

Leckie maintained a role in the media company as executive director of media at Seven Group Holdings, which holds investments in Seven West, earthmoving company WesTrac and Agricultural Bank of China. [2]

Leckie was born in Sydney [3] on 4 May 1951. [4] His father, Ron, was head of the transport division at Unilever; his mother was Joyce. [5] He was their first child, [3] and he had two brothers, Stuart and Ian. [4] Leckie was raised on the North Shore, [5] and attended Newington College from 1962 to 1968. [6] He then studied at Macquarie University, graduating with a Bachelor of Arts in economic and financial studies. He subsequently worked for Saatchi & Saatchi in London and travelled around Europe. [5]

Leckie first worked as a salesman for Nine Network starting in 1977. [5] He later became its managing director in 1990. [3] Under his leadership, the network spent all but six weeks atop the television ratings for the next decade. Nine's dominance over its rivals began to diminish in 2001, when a new ratings system was established. He was consequently dismissed by Kerry Packer in January 2001 . [5] Later that same year, he was appointed a trustee of the Centennial Park and Moore Park Trust. [7]

Leckie joined Seven Network in 2003, at the invitation of Kerry Stokes. Although it struggled during his first several months at the helm – culminating with a 13-year low in audience share in 2004 – the network's fortunes rebounded after it agreed an output deal with The Walt Disney Company. This enabled Seven to broadcast popular American shows in 2005, such as Desperate Housewives and Lost . A key part of Leckie's success was differentiating the network from Nine, appealing instead to a more casual, suburban audience. [5] He resigned as CEO of Seven West Media in 2012, but continued advising the company for four years. [8] [9] He was brought out of retirement in March 2020 to serve as an executive mentor, including to his protege James Warburton. [3] [5]

Leckie's first marriage was to Barbara Spence. [5] Together, they had one child named Tim. [4] Leckie married his second wife, Skye, in 1995. They met while she was public relations chief at David Jones Limited, and they remained married until his death. Together, they had two children, Harry and Ben. [5] [9]

Leckie cut his finger in a garage door in 2008. [3] [5] This injury led to septicemia, resulting in his being placed in an induced coma at St Vincent's Hospital in Sydney. [5] His health did not completely recover from that infection, [8] and he later scaled back on his engagements in order to recuperate. [5] [10]

James Douglas Packer is an Australian billionaire businessman and investor. Packer is the son of Kerry Packer, a media mogul, and his wife, Roslyn Packer. He is the grandson of Sir Frank Packer. He inherited control of the family company, Consolidated Press Holdings Limited, as well as investments in Crown Resorts and other companies. He is the former executive chairman of Publishing and Broadcasting Limited (PBL) and Consolidated Media Holdings, which predominantly owned media interests across a range of platforms, and a former executive chairman of Crown Resorts.

Donald William Burke is an Australian television presenter, television producer, author and horticulturist. He is best known as the longtime host of Burke's Backyard, a lifestyle program produced by his wife's company CTC Productions which ran for 17 years from 1987 to late 2004 on the Nine Network. He was also responsible for the creation of garden makeover program Backyard Blitz, starring former colleague Jamie Durie.

Jonathan "Jono" Harry Coleman, was an English-born television presenter, radio announcer, writer, comedian, and advertorial spokesperson. He was known for his career in his native country and Australia.

Adam Boland is the Managing Director of Australian production company, Bohdee Media. He had previously been the executive producer of the Seven Network's breakfast show Sunrise and created The Morning Show and Weekend Sunrise.

OzTAM is an Australian audience measurement research firm that collects and markets television ratings data. It is jointly owned by the Seven Network, the Nine Network and Network Ten, and is the official source of television ratings data for all metropolitan television in Sydney, Melbourne, Brisbane, Adelaide and Perth as well as subscription services on a national basis. 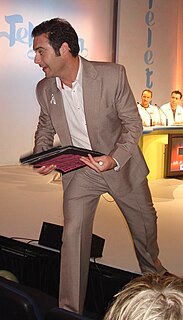 Andrew Patrick O'Keefe AM is an Australian television presenter and former lawyer. He is best known for being the host of the game shows Deal or No Deal and The Chase Australia. He was also the co-host of Weekend Sunrise from 2005 to 2017.

Nine Entertainment is an Australian publicly-listed media company with holdings in radio and television broadcasting, newspaper publications and digital media. It uses Nine as its corporate branding and also prefers this usage to be used for the parent company.

Jim Waley is a veteran Australian television presenter best known for his work on the Nine Network.

Peter Jeremy Meakin is an English Australian journalist who has worked as news/current affairs director for all three of Australia's commercial television networks.

Steven John Peter Spears was an Australian playwright, actor, writer and singer. His most famous work was The Elocution of Benjamin Franklin (1976). He was cited as "one of Australia's most celebrated playwrights".

Sarah Harris is an Australian television presenter and journalist.

Angela Jane Bishop is an Australian reporter and television presenter.