Sir David Lowe FRSE CBE DL (12 May 1899 – 3 November 1980) was a Scottish horticulturalist and businessman. He was Chairman of Elvingston Estates in East Lothian. In horticulture he did much to promote the daffodil. [1]

He was born in Musselburgh in East Lothian on 12 May 1899 the eldest son of David Lowe, Provost of Musselburgh. He was educated at Musselburgh Grammar School.

In the First World War he was an Observer in the Royal Flying Corps. From the 1930s onwards he proved a highly successful businessman and rose to be President of the Edinburgh Chamber of Commerce and President of the National Farmers Union.

In 1935 as a member of the Royal Aero Club, describing himself as a Farmer at Burnside, Prestonpans he passed pilots license taking his test taken in a De Havilland Moth. [2]

In 1950 he was made a Commander of the Order of the British Empire (CBE). In 1961 he was elected a Fellow of the Royal Society of Edinburgh. His proposers were Stephen J Watson, Sir Edmund Hudson, Alexander M Smith, and Alan William Greenwood.

He was knighted by Queen Elizabeth II in 1962.

Also in 1962 he was appointed chairman of the Livingston, West Lothian Town Corporation, overseeing the development of 6,692 acres (2,708 hectares) acres in Mid and West Lothian into the fourth post-Second World War new town to be built in Scotland. [3] The first tenants to be housed by 1964. [4]

In 1966 he received an honorary doctorate (DSc) from the University of Edinburgh. [5]

Hus hobby was breeding rare daffodils. He acquired some of his narcissi stock from the Brodie of Brodie and he concentrated on pale yellow varieties. [1]

East Lothian is one of the 32 council areas of Scotland, as well as a historic county, registration county and lieutenancy area. The county was also known as Haddingtonshire.

West Lothian is one of the 32 council areas of Scotland, and one of its historic counties. The county, which was historically known as Linlithgowshire, was bounded geographically by the Avon to the west and the Almond to the east. The modern council area occupies a larger area, with areas in the west transferred to Falkirk and areas in the east transferred to Edinburgh following local government reforms in the late 20th century. It did however gain areas from Midlothian. 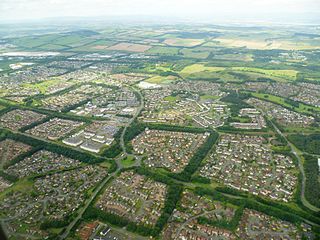 Livingston is the largest town in West Lothian, Scotland. Designated in 1962, it is the fourth post-war new town to be built in Scotland. Taking its name from a village of the same name incorporated into the new town, it was originally developed in the then-counties of Midlothian and West Lothian. It is situated approximately fifteen miles (25 km) west of Edinburgh and thirty miles (48 km) east of Glasgow, and is close to the towns of Broxburn to the north-east and Bathgate to the north-west.

Musselburgh is the largest settlement in East Lothian, Scotland, on the coast of the Firth of Forth, 5 miles (8 km) east of Edinburgh city centre. It has a population of 20,840. 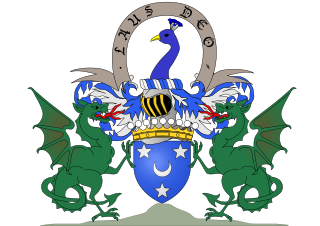 John Campbell Arbuthnott, 16th Viscount of Arbuthnott, was a Scottish peer, Lord Lieutenant of Kincardineshire (1977–99) and a notable businessman. 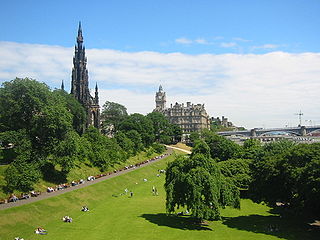 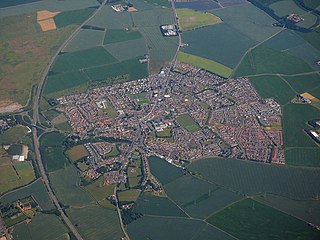 Tranent is a town in East Lothian, in the south-east of Scotland. It lies beside the A1 road,the A1 runs through the parish splitting the parish from its associated villages and hamlets namely Meadowmill and the port of the parish Cockenzie.The original main post road ran straight through the town until the new A1 was built.10 miles (16 km) east of Edinburgh. It is one of the oldest towns in East Lothian, and built on a gentle slope, about 90 metres (300 ft) above sea level. The population of the town is approximately 12,140, an increase of over 4,000 since 2001, making it the second most populated town in East Lothian after Musselburgh. Tranent was formerly a major mining town, but now serves as a commuter town for Edinburgh. 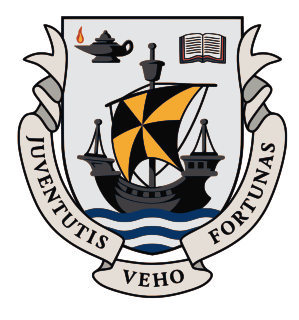 Sir William Young Darling CBE FRSE LLD MC was the Unionist Member of Parliament in the British House of Commons for the Edinburgh South constituency from 1945 to 1957. He was a director of the Royal Bank of Scotland from 1942 to 1957.

Sir Mitchell Mitchell-Thomson, 1st Baronet FRSE FSA(Scot) was a Scottish merchant and businessman who served as the Lord Provost of Edinburgh 1897 to 1900. He was also a Director of the Bank of Scotland.

John Brown Clark or Clarke CBE LLD FRSE was a Scottish mathematician. He was headmaster of George Heriot’s School from 1908 to 1926. He served as Vice President of the Royal Society of Edinburgh 1931–34.

Professor Norman McOmish Dott, CBE FRCSE FRSE FRCSC was a Scottish neurosurgeon. He was the first holder of the Chair of Neurological Surgery at the University of Edinburgh.

Newhailes House is a Palladian style country house which stands in 80 acres of parkland on the edge of the small town of Musselburgh in East Lothian, Scotland. Originally named Whitehills, it is a Category A listed building which is now occupied and maintained by the National Trust for Scotland.

Sir John Bruce, was a Scottish surgeon who was Regius Professor of Clinical Surgery in the University of Edinburgh and President of the Royal College of Surgeons of Edinburgh. 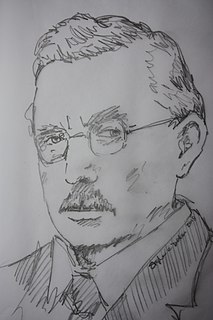 Arthur Henry Havens Sinclair MD FRSE FRCSEd LLD was a 20th-century Scottish ophthalmologist. He was a pioneer of quantitative perimetry, introducing this technique of visual field testing to Britain. Sinclair also introduced the operation of intracapsular extraction of the lens for cataract into the UK. He was President of the Ophthalmological Society of the United Kingdom from 1931 to 1933 and was President of the Royal College of Surgeons of Edinburgh from 1933 to 1935. He was Surgeon-Oculist to King George VI in Scotland.

Michael Francis Strachan CBE FRSE (1919–2000) was a 20th century Scottish businessman who served as Director of the Bank of Scotland from 1972 to 1990. He also served with distinction in the Second World War, alongside his wartime comrade, Enoch Powell. As an author he was biographer of several obscure historical figures.

William James Wright (1903-1994) was a Scottish farmer and agriculturalist. He was appointed Commander of the British Empire (CBE) by Queen Elizabeth II in the 1955 New Year Honours for Services to Agriculture in Scotland.