Ware was born in Plainfield, New Jersey, grew up in Scotch Plains, New Jersey, graduated from Scotch Plains-Fanwood High School, and briefly attended the Berklee College of Music. He moved to NYC in 1973, where he participated in the loft jazz scene, and later worked as a cab driver for 14 years in order to focus on his own group concept. [4] In the early 1980s, he returned to Scotch Plains with his wife Setsuko S. Ware.

Ware's debut album as a leader was recorded in 1977 – together with pianist Gene Ashton (aka Cooper-Moore) and drummer Marc Edwards – and released by HatHut in 1979. He performed and recorded with the groups of pianist Cecil Taylor and drummer Andrew Cyrille in the mid-late 1970s. He formed his own quartet in 1989. The group was originally composed of Ware, pianist Matthew Shipp, bassist William Parker, and drummer Marc Edwards. While Shipp and Parker were members for the group's entire existence, the drum chair was later occupied by Whit Dickey, Susie Ibarra, and Guillermo E. Brown.

The David S. Ware Quartet performed across the US and Europe and released a series of increasingly acclaimed albums spanning the 1990s on the independent labels Silkheart, DIW, Homestead, and AUM Fidelity. Saxophonist Branford Marsalis signed Ware to Columbia Records in 1998 for a three-album contract. [5] In 2001, jazz critic Gary Giddins described Ware's quartet as "the best small band in jazz today". [5] In 2007, after 17 years together, the quartet was disbanded following the release of the album Renunciation and a final European tour that spring. Ware proceeded to perform concerts and record albums with a series of new group configurations: a new quartet featuring guitarist Joe Morris, William Parker, and drummer Warren Smith; a special trio celebrating his 50th year of playing saxophone (in 2009) with Parker and Smith; a 2-volume series of solo saxophone performances; and finally with his last quartet, Planetary Unknown, featuring Cooper-Moore, Parker, and drummer Muhammad Ali. His final concert performance was with Planetary Unknown on August 27, 2011, at Jazzfestival Saalfelden in Austria. The recording of that concert was released in July 2012 on AUM Fidelity.

Ware was first diagnosed with kidney failure in 1999, and, following nearly a decade of undiminished creative activity while on a strict regimen of peritoneal dialysis, Ware underwent a critically necessary and successful kidney transplantation in May 2009. [6] The organ donor was Floridian Laura Mehr, who responded to an urgent email message sent out to nearly 1,000 of Ware's fans. [7] He returned to the stage that October, and continued to perform and record highly acclaimed work for the next two years, even as he endured serious complications brought on by required immunosuppressant medication. [8] He finally succumbed to an aggressive blood infection [9] and died on October 18, 2012, at Robert Wood Johnson University Hospital in New Brunswick, New Jersey, age 62. [10]

With Abdul Hannan / The Third World

Whit Dickey is a free jazz drummer. He has recorded albums with David S. Ware and Matthew Shipp.

Mat Maneri is an American composer, violin, and viola player. He is the son of the saxophonist Joe Maneri. and Sonja Maneri.

Other Dimensions In Music is a free jazz group founded in the 1980s.

Cooper-Moore is an American jazz pianist, composer and instrument builder/designer based in New York City. At age 8, he was recruited by community leaders to be the piano player for the town, and soon thereafter performed at church services and community functions. When he was 12 years old, he heard musicians such as Ahmad Jamal and Charles Mingus, and was inspired to pursue jazz. He has cited pianist Jaki Byard's contributions to Mingus' band as a particular inspiration.

Marc Edwards is a free jazz drummer who has played and recorded with artists such as Cecil Taylor, Charles Gayle, and David S. Ware. His influences include Charlie Parker and Buddy Rich. He is currently playing with a project with Weasel Walter, and with his own group, Marc Edwards Slipstream Time Travel, an afrofuturistic free jazz ensemble. Many of his solo works have a science fiction theme. He also plays in the band Cellular Chaos, his first foray into rock drumming.

Great Bliss, Vol. 1 is an album by American jazz saxophonist David S. Ware recorded in 1990 and released on the Swedish Silkheart label. Great Bliss was conceived as a two-installment project and marks the debut of the David S. Ware Quartet, one of the most highly acclaimed musical groups of the decade.

Third Ear Recitation is an album by American jazz saxophonist David S. Ware recorded in 1992 and released on the Japanese DIW label. This is the first recording by the David S. Ware Quartet with Whit Dickey replacing former drummer Marc Edwards.

Shakti is an album by saxophonist David S. Ware which was recorded in 2008 and released on the AUM Fidelity label. This was the first album Ware recorded after the breakup of the quartet that had been his main band for over 20 years.

Planetary Unknown is an album by saxophonist David S. Ware which was recorded in 2010 and released on the AUM Fidelity label. 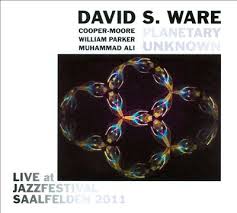