Born in Carluke, Scotland, Steele was a wing half who started his football career as a part-timer first with Armadale then St Mirren [2] while he worked as a miner before the First World War. [3] After the war he moved to Scottish junior club Douglas Water Thistle.

In 1919, he joined then Southern League club Bristol Rovers playing for them during their first years in the league after they became members of the newly formed Division Three. Herbert Chapman signed Steele in a £2,500 deal to take him to Huddersfield Town in May 1922. Steele spent seven years at Huddersfield, winning a hat-trick of League Championships, two runners-up spot, an FA Cup runners-up medal in 1928, and three caps for Scotland. He joined Preston North End in May 1929 on a free transfer where he finished his playing days in July 1930.

Steele began his managerial career when he worked at Bury as a coach. Similar roles followed at Danish side Bold Klubben F.C. and Sheffield United.

In 1931 he spent some months in Aalborg in northern Denmark as a coach and introduced the WM-formation in Denmark. [4]

In May 1936, he was appointed Bradford Park Avenue manager. He spent six years at Park Avenue and even turned out as an emergency centre forward against Sheffield Wednesday in October 1942 scoring one goal. [3] He resigned in 1943 to rejoin Huddersfield Town. In the club's first post-war season, Huddersfield finished just one place above the relegation positions in Division One and Steele resigned.

He was working on the family's fruit farm when Bradford City tempted him back into football in July 1948. [3] He became the second man, after Peter O'Rourke to manage both Bradford league clubs. He won just one of his first 18 games in charge as City finished bottom of Division Three (North) in 1948–49. The following season City came 19th, before a 7th-place finish in 1950–51. Steele left in February 1952 with the club again struggling in the bottom half of the league. He returned to Huddersfield Town for a third time as a scout. His grandson, David Shaw played for Town in the 1970s. He also ran a pub in Stanningley. [3] He died in May 1964 aged 69. 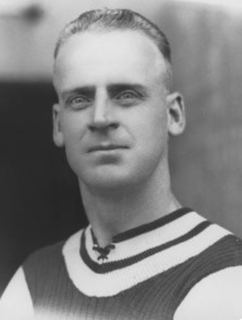 Ossett Albion Association Football Club was an English football club. They played at Queen's Terrace in Ossett, in West Yorkshire, more commonly known as Dimplewells, the area of Ossett the ground is situated in.

Robert Barclay was an English footballer who played as an inside forward. Born in Scotswood, Newcastle upon Tyne Barclay is best remembered for his time at Sheffield United for whom he played in the 1936 FA Cup Final, but also had spells for Derby County and Huddersfield Town. Barclay also represented England on three occasions, scoring two goals.

Thomas Cowan is a Scottish former footballer, who played as a defender.

Albert Beasley, generally known as Pat Beasley, was an England international footballer who made more than 400 appearances in the Football League. He also became a manager.

Ernest Islip was an English professional footballer who played as a forward. He played for several years in the First Division of the Football League, and won the FA Cup with Huddersfield Town. 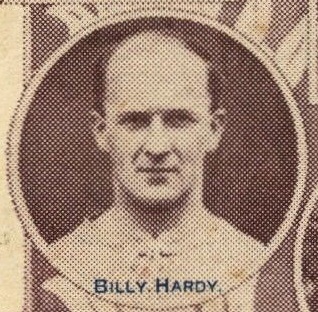 William Hardy was an English professional footballer who played as a half back. He began his career with his hometown side Bedlington United before moving to Scotland where he made his professional debut with Heart of Midlothian in 1910 at the age of 18. He remained with the side for a year, making sporadic appearances, before joining Football League Second Division side Stockport County. However, he made only one appearance for the first team.

Samuel James T. Taylor was an English professional footballer, who played at inside forward for various clubs in the 1920s, including Huddersfield Town, Sheffield Wednesday and Southampton.

Robert Curry was an English professional footballer who played as an inside forward for Sheffield Wednesday and Colchester United in the Football League.