Dawn Elberta Wells (born October 18, 1938) is an American actress who became known for her role as Mary Ann Summers on the CBS sitcom Gilligan's Island .

Wells was born in Reno, Nevada, where she attended Reno High School. [1] Her father owned a local Reno shipping company called, "Wells Cargo". After high school graduation, Wells attended Stephens College in Columbia, Missouri, where she majored in chemistry. She transferred to the University of Washington in Seattle, where she graduated in 1960 with a degree in theater arts and design. She was a member of the Alpha Chi Omega sorority. [1]

In 1959, Wells was crowned Miss Nevada and represented her state in the Miss America 1960 pageant in Atlantic City, New Jersey. [2] [3]

Wells had small roles in the early 1960s films Palm Springs Weekend and The New Interns , and later starred with Michael Dante in the independent 1975 film Winterhawk, playing a Western settler kidnapped by an Indian chief. Her other films include The Town That Dreaded Sundown , Return to Boggy Creek , Lover's Knot, Soulmates, Forever for Now, and Super Sucker . In fall 2011, she began filming Silent But Deadly (originally titled Hotel Arthritis), [4] a comedy horror film released in 2012.

Following Gilligan's Island, Wells embarked on a theater career, appearing in nearly one hundred theatrical productions as of July 2009. She spent the majority of the 1970s, and 1980s, touring in musical theater productions. She also had a one-woman show at the MGM Grand Hotel and Casino in Las Vegas in 1985.

In 1993, Wells published Mary Ann's Gilligan's Island Cookbook with co-writers Ken Beck and Jim Clark, including a foreword by Bob Denver. She was close to Alan Hale Jr., who played The Skipper in Gilligan's Island, even after the series completed its run, and he contributed a family recipe ("Kansas Chicken and Dumplings") to her cookbook. Hale's character was the inspiration behind such concoctions as Skipper's Coconut Pie, Skipper's Navy Bean Soup, and Skipper's Goodbye Ribeye, and he is depicted as Skipper Jonas Grumby in numerous photographs throughout the book. She said in a 2014 interview with GoErie.com, "Alan could not have been kinder to a young actress. He was a real peach." [5]

In 2005, Wells consigned her original gingham blouse and shorts ensemble for sale from her signature role. Beverly Hills auction house Profiles in History sold it for $20,700. [2] In 2008, she joined Gilligan's Island creator Sherwood Schwartz in Los Angeles for the celebration of Schwartz's entry into the Hollywood Walk of Fame. She appeared on the "Celebrity Holiday Bash" episode of Food Network's Chopped , which first aired December 1, 2013.

In 2014, Wells released What Would Mary Ann Do? A Guide to Life, which she co-wrote with Steve Stinson. The book was released to coincide with the 50th anniversary of Gilligan's Island. [6]

Gilligan's Island co-star Russell Johnson died on January 16, 2014, leaving Wells and Tina Louise as the only surviving cast members of the sitcom.

In May 2016, Wells was named Marketing Ambassador to MeTV Network. [7] In January 2019, she promoted the Gilligan's Island television series on the MeTV television network.

For several years, Wells operated a business, Wishing Wells Collections, making clothing for people with limited mobility. [11] She is the founder of the Idaho Film and Television Institute, a not-for-profit (501c3) educational organization with "a vision of education, technical training and economic development in Southeastern Idaho." [12] She organized SpudFest, a regional annual family movie festival, [12] and has been a spokeswoman for Idaho Potatoes. [13] 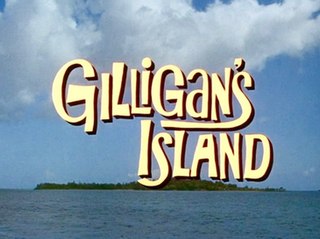 Gilligan's Island is an American sitcom created and produced by Sherwood Schwartz. The show had an ensemble cast that featured Bob Denver, Alan Hale Jr., Jim Backus, Natalie Schafer, Tina Louise, Russell Johnson, and Dawn Wells. It aired for three seasons on the CBS network from September 26, 1964, to April 17, 1967. The series followed the comic adventures of seven castaways as they attempted to survive on an island on which they had been shipwrecked. Most episodes revolve around the dissimilar castaways' conflicts and their unsuccessful attempts, for whose failure Gilligan was frequently responsible, to escape their plight. 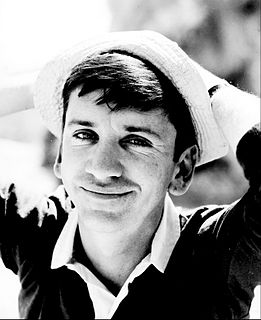 Robert Osbourne Denver was an American comedic actor who portrayed Gilligan on the 1964–1967 television series Gilligan's Island, and beatnik Maynard G. Krebs on the 1959–1963 series The Many Loves of Dobie Gillis.

Tina Louise is an American actress best known for playing movie star Ginger Grant in the CBS television situation comedy Gilligan's Island. She began her career on stage during the mid-1950s before landing her breakthrough role in 1958 drama film God's Little Acre for which she received the Golden Globe Award for New Star of the Year.

Alan Hale Jr. was an American actor and restaurateur. He was the son of character actor Alan Hale Sr. His television career spanned four decades, but he was best known for his co-starring role on the 1960s series Gilligan's Island. He also appeared on several talk and variety shows. 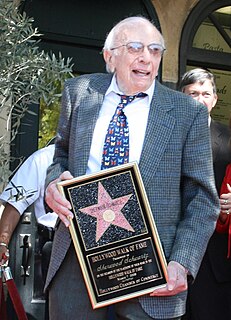 Sherwood Charles Schwartz was an American television producer. He worked on radio shows in the 1940s, but he now is best known for creating the 1960s television series Gilligan's Island on CBS and The Brady Bunch on ABC. On March 7, 2008, Schwartz, at the time still active in his 90s, was honored with a star on the Hollywood Walk of Fame. That same year, Schwartz was also inducted into the Television Hall of Fame. 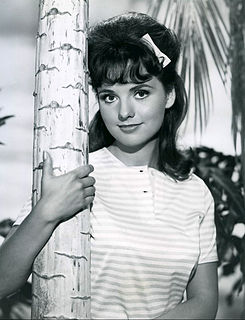 Mary Ann Summers is a fictional character in the television sitcom Gilligan's Island which ran on the CBS network from 1964 to 1967, and has run more or less continuously since in reruns. She was played by actress Dawn Wells.

Ginger Grant is a fictional character portrayed by actress Tina Louise in the 1964 to 1967 television sitcom Gilligan's Island. 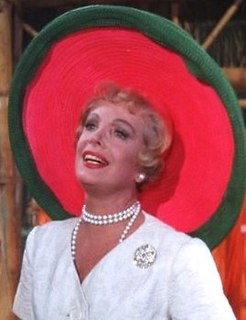 Eunice "Lovey" Howell, referred to as "Mrs. Howell" by characters other than her husband, is a fictional character from the 1964 to 1967 television show Gilligan's Island. Played by Natalie Schafer, the character was a rich, spoiled socialite, married to Thurston Howell III. 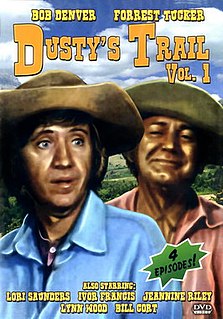 Dusty's Trail is an American Western/comedy series that aired in syndication from September 1973 to March 1974 starring Bob Denver and Forrest Tucker. The series is a western-themed reworking of Denver's previous series Gilligan's Island. 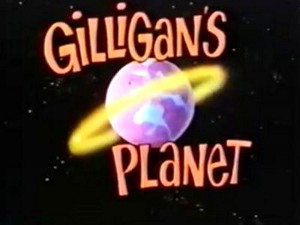 Gilligan's Planet is an American Saturday morning animated series produced by Filmation and MGM/UA Television which aired during the 1982-1983 season on CBS. It was the second animated spin-off of the sitcom Gilligan's Island.

The New Adventures of Gilligan is an American Saturday morning animated series produced by Filmation, which aired on ABC during the 1974–1977 seasons. The show was based on the 1964-1967 sitcom Gilligan's Island. A few years later, Filmation produced a sequel, Gilligan's Planet. 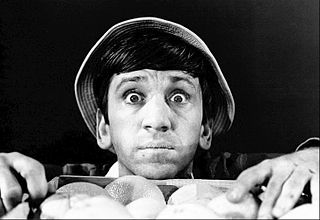 Gilligan is a fictional character played by Bob Denver on the 1960s TV show Gilligan's Island and its many sequels. Gilligan, affectionately called "little buddy" by the "Skipper", is the bumbling, dimwitted, accident-prone first mate of the SS Minnow. None of the show's episodes ever specified Gilligan's full name or clearly indicate whether "Gilligan" is the character's first or his last name. Gilligan wears a trademark red shirt, pale trousers, white sneakers, and white navy cap. 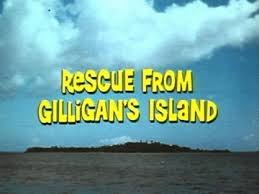 Rescue from Gilligan's Island is a 1978 made-for-television comedy film that continues the adventures of the shipwrecked castaways from the 1964–67 sitcom Gilligan's Island, starring Bob Denver and Alan Hale, Jr., and featuring all the original cast except Tina Louise. The film first aired on NBC as a two-part special on October 14 and October 21, 1978. The film has the characters finally being rescued after 15 years on the island. The film was directed by Leslie H. Martinson.

"The Producer" is the fourth episode of the third season of Gilligan's Island, in which the castaways stage a musical version of Hamlet. It first aired in on October 3, 1966. 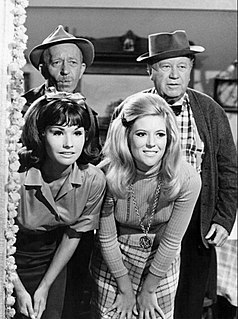 Lori Saunders is an American film and television actress, probably best known for her role as Bobbie Jo Bradley in the television series Petticoat Junction (1965–1970).

The first season of the American comedy television series Gilligan's Island was shown in the United States on September 26, 1964 and concluded on June 12, 1965 on CBS. The season introduced the comic adventures of seven castaways as they attempted to survive and escape from an island on which they had been shipwrecked. Most episodes revolved around the dissimilar castaways' conflicts and their failed attempts—invariably Gilligan's fault—to escape their plight. The season originally aired on Saturdays at 8:30-9:00 pm (EST).

The second season of the American comedy television series Gilligan's Island commenced airing in the United States on September 16, 1965 and concluded on April 28, 1966 on CBS. The second season continues the comic adventures of seven castaways as they attempt to survive and escape from an island on which they had been shipwrecked. Most episodes revolve around the dissimilar castaways' conflicts and their failed attempts—invariably Gilligan's fault—to escape their plight. The season originally aired on Thursdays at 8:00-8:30 pm (EST). Unlike the first season, this season was shot in color.