The Dean of Gibraltar is the head (primus inter pares – first among equals) and chair of the chapter of canons, the ruling body of the Cathedral of the Holy Trinity, Gibraltar. The cathedral is the mother church of the Diocese in Europe and the seat of the Bishop in Europe (though the bishop is now based in Brussels). The current (2020) Dean is Ian Tarrant. 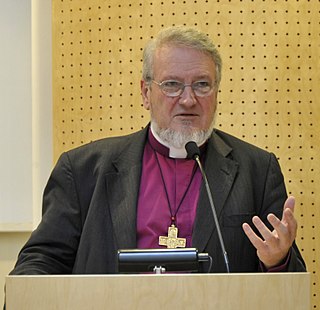 The Bishop in Europe is the ordinary of the Church of England's Diocese in Europe in the Province of Canterbury. 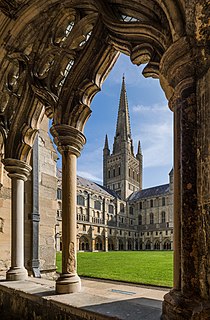 Norwich Cathedral is an Anglican cathedral in Norwich, Norfolk, dedicated to the Holy and Undivided Trinity. It is the cathedral church for the Church of England Diocese of Norwich and is one of the Norwich 12 heritage sites. 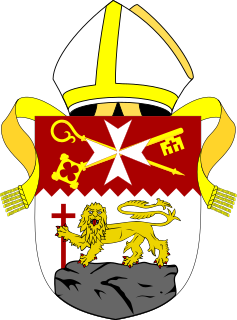 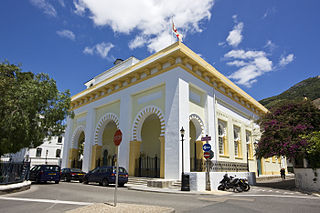 The Cathedral of the Holy Trinity is the cathedral for the Church of England Diocese of Gibraltar in Europe. Located in Cathedral Square, it is sometimes referred to simply as Gibraltar Cathedral, although it should not be confused with the Cathedral of St. Mary the Crowned, which is Gibraltar's Roman Catholic cathedral. The cathedral is particularly notable for its Moorish revival architecture, particularly in its use of horseshoe arches. This is an architectural style inspired by Moorish architecture, appropriate given the period of Moorish control in Gibraltar's history. 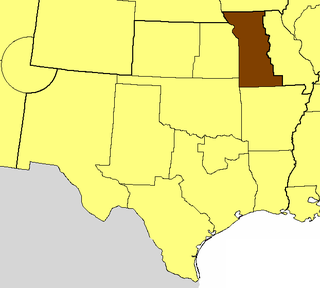 The Diocese of West Missouri, is the diocese of the Episcopal Church in the United States of America with jurisdiction over western Missouri. It is in Province 7 and its cathedral, Grace and Holy Trinity Cathedral, is in Kansas City, Missouri, as are the diocesan offices.

The Diocese of Eastern Kowloon is one of the three dioceses under the Hong Kong Sheng Kung Hui. Its territory covers most part of eastern Kowloon and eastern New Territories. Holy Trinity Cathedral, cathedral of the diocese, was established in 1890, making it one of the oldest Anglican churches in Hong Kong. Incumbent bishop, Timothy Kwok, was elected on 30 March 2014 and enthroned on 23 November 2014, replacing the outgoing bishop, Louis Tsui. 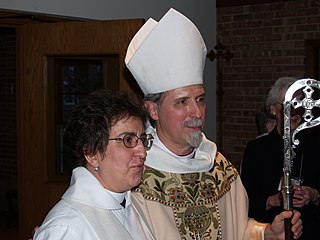 William Dailey Persell is an American bishop, formerly the bishop of the Episcopal Diocese of Chicago (1999–2008).

The Pro-Cathedral of the Holy Trinity is an Anglican Pro-Cathedral in Ixelles, a municipality of Brussels, Belgium. It is part of the Diocese in Europe of the Church of England. The church is located at 29, rue Capitaine Crespel/Kapitein Crespelstraat, near the Avenue Louise/Louizalaan.

Robin Morton Gill is a British Anglican priest, theologian, and academic, specialising in Christian ethics. Since 2012, he has been canon theologian of the Cathedral of the Holy Trinity, Gibraltar: he is currently its acting dean. He was William Leech Professor in Applied Theology at the University of Newcastle (1988–1992), and was then Michael Ramsey Professor of Modern Theology (1992–2011) and Professor of Applied Theology (2011–2014) at the University of Kent. He has also served as a parish priest in the Church of England and the Scottish Episcopal church, serving in the dioceses of Coventry, of Edinburgh, of Newcastle, and of Canterbury.