The Dean of Ripon is a senior cleric in the Church of England Diocese of Leeds. The dean is the head of the chapter at Ripon Cathedral – his predecessors were deans of the same church when it was previously the cathedral of the Diocese of Ripon and a minster in the diocese of York. 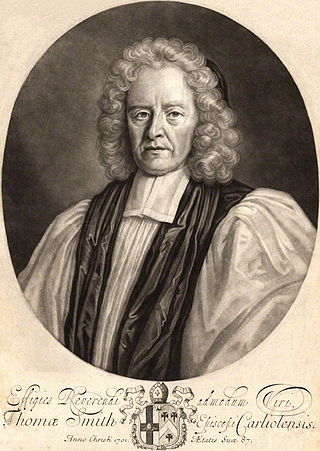 Achilles Daunt (1832–1878) was a noted Irish preacher and homilist, and Anglican dean of Cork.

James Wedderburn, bishop of Dunblane, was the second son of John Wedderburn, a mariner and shipowner from Dundee, and Margaret Lindsay. James Wedderburn (1495?–1553), a poet and playwright and early Scottish proponent of Protestantism, was his grandfather.

Samuel Pullen (1598–1667) was the Church of Ireland archbishop of Tuam in Ireland.

William Jackson, referred to as Jackson of Exeter, was an English organist and composer.

Vincent William Ryan , was the inaugural Bishop of Mauritius from 1854 to 1869.

Jeffery Ekins D.D. was an English churchman, Dean of Carlisle Cathedral from 1782.

Peter Drelincourt, was Dean of Armagh. He was the sixth son of Charles Drelincourt, minister of the reformed church in Paris, and graduated M.A. at Trinity College, Dublin, 1681, and LL.D. 1691.

William Goode the younger (1801–1868) was an English cleric, a leader of the evangelicals of the Church of England and from 1860 the Dean of Ripon.

John Neile D.D. was an eminent Anglican priest in the second half of the 17th century.