The Decretum Gelasianum or the Gelasian Decree is so named because it was traditionally thought to be a Decretal of the prolific Pope Gelasius I, bishop of Rome 492–496. The work reached its final form in a five-chapter text written by an anonymous scholar between 519 and 553, the second chapter of which is a list of books of Scripture presented as having been made Canonical by a Council of Rome under Pope Damasus I, bishop of Rome 366–383. This list, known as the Damasine List, [1] represents the same canon as shown in the Council of Carthage Canon 24, 419 AD. [2]

The Decretum has five parts. Parts 1, 3, and 4 are not relevant to the canon. The second part is a canon catalogue. The Deuterocanonical Books (other than Baruch and the Letter of Jeremiah) are accepted by the catalogue, and are still found in the Roman Catholic Bible, though not in the Protestant canon. The canon catalogue gives 27 books of the New Testament. In the list of gospels, the order is given as Matthew, Mark, Luke, John. Fourteen epistles are credited to Paul including Philemon and Hebrews. Of the General Epistles seven are accepted: two of Peter, one of James, one of the apostle John, two of "the other John the elder" (presbyter), and one of "Judas the Zealot". [3]

The fifth part is a catalogue of the "apocryphal books" and other writings which are to be rejected, presented as adjudged apocryphal "by Pope Gelasius and seventy most erudite bishops". Though the ascription is generally agreed to be apocryphal itself, except among the most traditional of apologists, it perhaps makes allusion to the seventy translators of the Septuagint and the seventy apostles sent out in Luke. This list de libris recipiendis et non recipiendis ("of books to be admitted and not to be admitted"), probably originating in the 6th century, represents a tradition that can be traced back to Pope Damasus I and reflects Roman practice in the development of the Biblical canon. These apocrypha are not the same as the Deuterocanonical Books, but include the Acts of Andrew and other spurious works. [3]

Versions of the work appear in multiple surviving manuscripts, some of which are titled as a Decretal of Pope Gelasius, others as a work of a Roman Council under the earlier Pope Damasus. However, all versions show signs of being derived from the full five-part text, which contains a quotation from Augustine, writing about 416 after Damasus, which is evidence for the document being later than that. [1]

Apocrypha is a plural word that originally denoted hidden or secret writings, to be read only by initiates into a given Christian group. It comes from Greek and is formed from the combination of apo (away) and kryptein. The word apocrypha, like many other words, has undergone a major change in meaning throughout the centuries. Concerning these ancient books, the word apocrypha originally meant a text too sacred and secret to be in everyone's hands. Christians today say that apocrypha are works, usually written, of unknown authorship or of doubtful origin. The word apocryphal (ἀπόκρυφος) was first applied to writings which were kept secret because they were the vehicles of esoteric knowledge considered too profound or too sacred to be disclosed to anyone other than the initiated. Apocrypha was applied to writings that were hidden not because of their divinity but because of their questionable value to the church. In general use, the word apocrypha came to mean "false, spurious, bad, or heretical".

The Bible is a collection of religious texts or scriptures sacred to Christians, Jews, Samaritans, Rastafari and others. It appears in the form of an anthology, a compilation of texts of a variety of forms that are all linked by the belief that they are collectively revelations of God. These texts include theologically-focused historical accounts, hymns, prayers, proverbs, parables, didactic letters, erotica, poetry, and prophecies. Believers also generally consider the Bible to be a product of divine inspiration.

The deuterocanonical books are books and passages considered by the Catholic Church, the Eastern Orthodox Church, the Oriental Orthodox Churches and the Assyrian Church of the East to be canonical books of the Old Testament but which are considered non-canonical by Protestant denominations. They date from the period 300 BC–AD 100 approximately. While the New Testament never quotes from or ascribes canonical authority to these books, some say there is a correspondence of thought, while others see texts from these books being paraphrased, referred or alluded to many times in the New Testament, particularly in the Pauline epistles depending in large measure on what is counted as a reference.

Pope Damasus I was the bishop of Rome from October 366 to his death. He presided over the Council of Rome of 382 that determined the canon or official list of sacred scripture. He spoke out against major heresies in the church and encouraged production of the Vulgate Bible with his support for Jerome. He helped reconcile the relations between the Church of Rome and the Church of Antioch, and encouraged the veneration of martyrs.

Pope Gelasius I was the bishop of Rome from 1 March AD 492 to his death on 19 November 496. He was probably the third and final bishop of Rome of Berber descent. Gelasius was a prolific author whose style placed him on the cusp between Late Antiquity and the Early Middle Ages. His predecessor Felix III employed him especially in drafting papal documents. During his pontificate he called for strict Catholic orthodoxy, more assertively demanded obedience to papal authority, and, consequently, increased the tension between the Western and Eastern Churches.

The Second Book of Maccabees, also called 2 Maccabees, is a deuterocanonical book originally in Greek which focuses on the Maccabean Revolt against Antiochus IV Epiphanes and concludes with the defeat of the Seleucid Empire general Nicanor in 161 BC by Judas Maccabeus, the hero of the hard work.

The Book of Baruch is a deuterocanonical book of the Bible in some Christian traditions. In Judaism and most forms of Protestant Christianity, it is considered not to be part of the Bible. It is named after Baruch ben Neriah, Jeremiah's well-known scribe, who is mentioned at Baruch 1:1, and has been presumed to be the author of the whole work. The book is a reflection of a late Jewish writer on the circumstances of Jewish exiles from Babylon, with meditations on the theology and history of Israel, discussions of wisdom, and a direct address to residents of Jerusalem and the Diaspora. Some scholars propose that it was written during or shortly after the period of the Maccabees.

Decretum may refer to:

The Gospel of Bartholomew is a missing text amongst the New Testament apocrypha, mentioned in several early sources. It may be identical to either the Questions of Bartholomew, the Resurrection of Jesus Christ, or neither.

The Epistula Apostolorum is a work from the New Testament apocrypha. Probably dating from the 2nd century CE, it was within the canon of the Ethiopian Orthodox Tewahedo Church, but not rediscovered in the Western world until the early 20th century. In 51 chapters, it takes the form of a letter from the apostles describing key events of the life of Jesus, followed by a dialogue between Jesus and the apostles.

The Council of Rome was a meeting of Catholic Church officials and theologians which took place in 382 under the authority of Pope Damasus I, the then current bishop of Rome. It was one of the fourth century councils that "gave a complete list of the canonical books of both the Old Testament and the New Testament."

The biblical apocrypha denotes the collection of apocryphal ancient books thought to have been written some time between 200 BC and 400 AD. Most Christian Churches include some or all of the same texts within the body of their version of the Old Testament.

The Old Testament is the first section of the two-part Christian biblical canon; the second section is the New Testament. The Old Testament includes the books of the Hebrew Bible (Tanakh) or protocanon, and in various Christian denominations also includes deuterocanonical books. Orthodox Christians, Catholics and Protestants use different canons, which differ with respect to the texts that are included in the Old Testament.

A biblical canon or canon of scripture is a set of texts which a particular Jewish or Christian religious community regards as authoritative scripture. The English word canon comes from the Greek κανών, meaning "rule" or "measuring stick". Christians were the first to use the term in reference to scripture, but Eugene Ulrich regards the notion as Jewish. 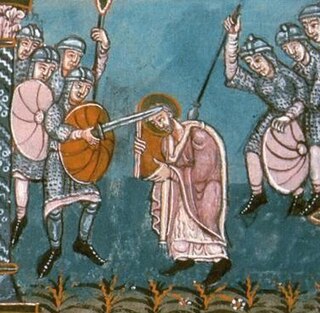 The Ragyndrudis Codex is an early medieval codex of religious texts, now in Fulda in Germany, which is closely associated with Saint Boniface, who, according to tradition, used it at the time of his martyrdom to ward off the swords or axes of the Frisians who killed him on 5 June 754 near Dokkum, Friesland. This long association has given the codex the status of a contact relic.

The Gospels of the Passion are related to the last events of Jesus' life . The last chapters of the canonical gospels of gospel of Matthew, gospel of Mark, gospel of Luke and Gospel of John receive this classification. Among the apocryphal gospels are: