The western part of the district is on the Central African Plateau at an altitude of 1 200 to 1,600 m. Higher mountain ranges separate this from land alongside Lake Malawi in the Rift Valley at 500 m. The landscape is a mixture of grassland with granite outcrops, natural woodland and commercial pine plantations on the mountains and some bamboo forest nearer the lake. The wet season is November to April with almost no rainfall at other times. The higher altitudes have moderate temperatures and can be cold in June and July.

The main town is Dedza Township located on the M1 road 85 km south of Lilongwe. The town has banks, post office, petrol stations, accommodation and a range of shops. There are smaller market towns with a post office, police station, shops and market—Lobi, Linthipe, Mayani, Mtakataka. Most of the people live in rural villages as subsistence farmers.

At the time of the 2018 Census of Malawi, the distribution of the population of Dedza District by ethnic group was as follows: [2]

There are eight National Assembly constituencies in Dedza:

Since the 2009 election all of these constituencies have been held by members of the Malawi Congress Party. [3]

The district also has 32 wards that elect members to the Dedza District Assembly (the local government authority). There are 8 Traditional Authority Areas headed by chiefs and Dedza Township has its own Assembly.

The M1 road linking Lilongwe with Blantyre runs through the centre of the District. The M5 Salima to Balaka road runs parallel to the Lake and the S126 Masasa to Golomoti road joins the two just south of the district boundary. The western part of the district has no major roads.

Apart from a commercial rice growing project at the side of Lake Malawi, agriculture is family based smallholdings. Larger businesses are limited to Paragon Ceramics (floor and roof tiles, Dedza Pottery ceramics), WICO Sawmill and a rose grower.

There are a number of tourist attractions in the district. There are four forest reserves—Dedza-Salima, Chongoni, Dedza Mountain and Mua-Livulezi. The Chongoni Rock Art Area is a UNESCO World Heritage Site. Dedza Pottery is famous for its coffee shop and ceramics and has accommodation. The Kungoni Cultural Centre at Mua has a museum that displays the cultural heritage of the tribes of central Malawi, a wood carving school and accommodation.

Theresa Kachindamoto is the paramount chief, or Inkosi, of the Dedza District. She is known for her forceful action in dissolving child marriages. [4] 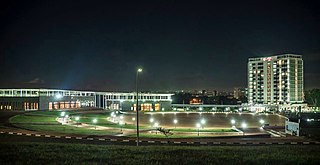 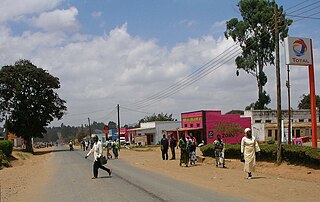 Dedza is the main township of Dedza District in the Central Region of Malawi. 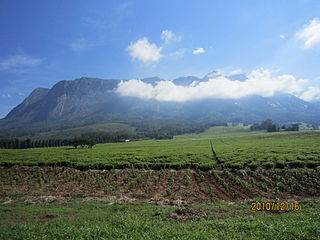 Mulanje, formerly called Mlanje, is a town in the Southern Region of Malawi, close to the border with Mozambique, to the east. It is near the Mulanje Massif.

Lilongwe is a district in the Central Region of Malawi. The capital is Lilongwe.

Chipoka is a town located in the Central Region district of Salima, in Malawi. It is one of the main ports on Lake Malawi and is the closest port to the capital city of Lilongwe. Chipoka is located on the western shore of Kasangha Bay across from Cape Maclear.

The Kirk Range is a plateau in southwestern Malawi, extending in a north-south direction and skirting the southwestern shore of Lake Malawi and the western border of the Shire River valley. The range includes several peaks higher than 1800 meters in elevation. The northern end of the range overlooks the Central Region plateau and Lake Malawi. The range forms the Malawi-Mozambique border, and the divide between the watersheds of Mozambique's Revúboé River to the west and Malawi's Shire River to the east. The Lisungwe and Mkulumadzi (Wamkulumadzi) rivers are tributaries of the Shire that originate in the Kirk Range. 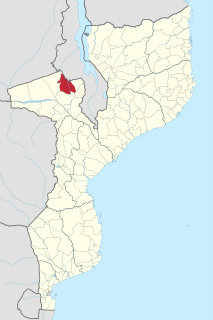 Chongoni Rock Art Area is located in the Central Region of Malawi consisting of 127 sites in the forested hills of the Malawi plateau with depictions of rock art and paintings of the farmer community of the Late Stone Age and the Iron Age period. This ancient record of the cultural history is in vogue even now.

The KungoniCentre of Culture and Art is a non-profit organization in central Malawi. Kungoni is located in Mua, a village in the Dedza district, about 60 km from Salima. Kungoni is both easily accessible, being about two hours drive on bitumen from Lilongwe and three from Blantyre. Kungoni sits a little above the lake plain, with views to the lake in one direction and the African Rift Valley escarpment in the other. The site is landscaped and planted as a botanic garden with a variety of tropical trees and shrubs.

The following is a timeline of the history of the city of Lilongwe, Malawi.