Deewangee (transl. Obsession) is a 2002 Indian Hindi-language psychological thriller film directed by Anees Bazmee and produced by Nitin Manmohan. The film stars Ajay Devgn, Akshaye Khanna and Urmila Matondkar. The music was composed by Ismail Darbar, with lyrics by Salim Bijnori and Nusrat Badr. This was Devgn's first antagonist role and he won the Filmfare Best Villain Award. The plot of this movie is unofficially adopted from 1996 movie Primal Fear.

Raj Goyal (Akshaye Khanna), a young and successful criminal lawyer, famous for never having lost a case, is introduced to popular singer Sargam (Urmila Matondkar) by music magnate Ashwin Mehta (Vijayendra Ghatge). The following day, Ashwin is brutally murdered in his own house. The murderer, Tarang Bharadwaj(Ajay Devgn), who is Sargam's childhood friend and music mentor, is caught red-handed at the crime scene. He claims he is innocent and Sargam, who believes in Tarang's innocence, approaches Raj to defend him, which he accepts after meeting Tarang.

Realising him to have a mental illness, he hires a psychiatrist (Seema Biswas). To study his case. The psychiatrist finds out that Tarang has split personality disorder, and his other personality goes by the name of Ranjeet.

Meanwhile, Raj and Sargam grow closer due to their frequent meetings and eventually fall in love.

Raj speaks to Ranjeet, who is a complete opposite of the innocent and simple Tarang, and he admits to killing Ashwin because, on the night of the party, Ashwin had tried to molest Sargam. Ranjeet sees Tarang as his younger brother who in turn considers Sargam his wife.Bringing his split personality in front of the court, Raj is able to win the case and free Tarang. But right after he is acquitted, Raj finds out that the split personality disorder was an act put up by Tarang to get out of jail. Tarang then tells him to stay away from Sargam.Raj tries to reopen the case in order to protect Sargam but fails, and Tarang is moved to the mental hospital for a few days for his treatment. Raj elongates his stay in the mental hospital by proving that he is still sick and needs more treatment. Tarang is able to wriggle out of Raj's attempt and is released.Raj appoints personal security for Sargam to ensure her safety, while Tarang relentlessly tries to reach her, during which he seriously injures Yana, Sargam's assistant.

Raj says that they can trap Tarang with Sargam performing a show and Tarang coming there. But Tarang successfully kidnaps Sargam and takes her to an old fort where he had booked a vehicle to go abroad. Sargam gives her location secretly to Raj. Sargam while trying to escape tells Tarang that she loves Raj to which Tarang responds saying that then he has to kill Raj. Soon raj arrives and a fight ensues which ends with Sargam overpowering Tarang and pushing him into a nearby river.

The next morning the police are unsuccessful in finding his body.

The movie ends with Sargam and Raj enjoying a vacation and they hear someone sing one of Tarang's songs. Raj believes it cannot be Tarang and because the song is so popular, anyone who can sing it.

The soundtrack of the film contains nine songs. The music is conducted by composer Ismail Darbar. According to the Indian trade website Box Office India, with around 12,00,000 units sold, this film's soundtrack album was the year's ninth highest-selling. [2]

The film grossed ₹ 22 crore worldwide and was declared a below average at the box office. [1] [3]

Vishal Veeru Devgan, known professionally as Ajay Devgn, is an Indian actor, film director and producer. He has appeared in over a hundred Hindi films. Devgn has won numerous accolades, including two National Film Awards and four Filmfare Awards. In 2016, he was honoured by the Government of India with the Padma Shri, the fourth-highest civilian honour of the country.

Urmila Matondkar is an Indian actress and politician. Known for her work in Hindi films, in addition to Telugu, Tamil, Malayalam and Marathi cinema, she has received numerous accolades, including the Filmfare Award and the Nandi Award. During her career as a leading actress, she established a distinctive on-screen persona, was identified with her intense style and dancing skills.

Akshaye Vinod Khanna is an Indian actor who appears in Hindi films. He is the son of late Indian actor Vinod Khanna. He has also won numerous awards in his career including two Filmfare Awards, three Screen Awards and two IIFA Awards in varied acting categories.

Bhoot (transl. Ghost) is a 2003 Indian supernatural horror film directed by Ram Gopal Varma and stars Ajay Devgn and Urmila Matondkar in the lead roles. It was the second horror film made by Ram Gopal Verma after Raat. It was perceived to be different from a typical Hindi film as it did not contain songs. It was later dubbed in Telugu as 12 Va Anthasthu and remade in Tamil as Shock. The film was a box-office hit. Urmila won several accolades and awards for her performance as a ghost possessed wife. Verma made a sequel called Bhoot Returns which was released on 12 October 2012. 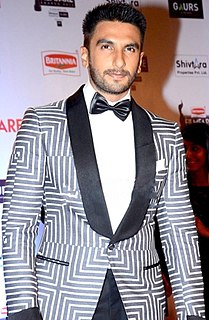 Judaai is a 1997 Indian melodrama comedy film directed by Raj Kanwar in a screenplay written by Prakash Raj, S.V. Krishna Reddy and Jainendra Jain and produced by Boney Kapoor. The film stars Anil Kapoor, Sridevi and Urmila Matondkar in lead roles. Kader Khan, Farida Jalal, Johnny Lever, Paresh Rawal, Upasana Singh and Saeed Jaffrey are featured in supporting roles; while Poonam Dhillon makes a special appearance. The film was a remake of the 1994 Telugu film Subhalagnam. In the film, lured by wealth, poor housewife Kajal asks her husband, Raj, an honest engineer, to marry Janhvi, the rich niece of his boss. Little does she know about the problems that await her. After an active career of 30 years, Judaai marked Sridevi's final film appearance before she took a fifteen-year sabbatical from film acting. 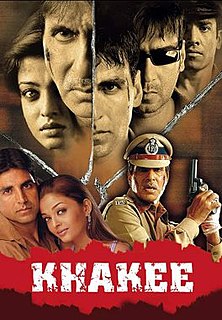 Khakee is a 2004 Indian Hindi-language neo-noir action thriller film directed by Rajkumar Santoshi and written by Santoshi and Sridhar Raghavan. The story revolves around an Indian police team on a mission to escort an accused terrorist from a small town in Maharashtra to Mumbai. Khakee stars an ensemble cast consisting of Amitabh Bachchan, Akshay Kumar, Ajay Devgan, Aishwarya Rai Bachchan, and Tusshar Kapoor. It was theatrically released on 23 January 2004 to a widespread critical acclaim. The critical response was mostly positive, with praise towards the direction, performances, and story. Produced on a budget of ₹25.77 crore (US$3.6 million), Khakee earned a total of ₹49.89 crore (US$7.0 million) at the worldwide box office, becoming one of the year's highest-grossing Bollywood films. 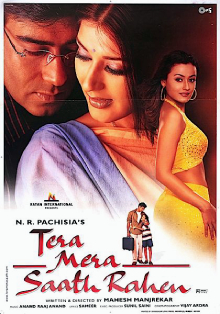 Hulchul is a 1995 Indian Hindi action film directed and written by Anees Bazmee. It stars Vinod Khanna, Ajay Devgn and Kajol. The film premiered on 4 August 1995 in Mumbai. The role of Sharmili was originally offered to Divya Bharti but her sudden death called for Kajol to replace her. It is also made in Bengali as "Akraman" with same star cast & crew. The movie was a flop at the box office.

No Problem is a 2010 Indian Hindi-language action comedy film directed by Anees Bazmee and produced by Rajat Rawail and Anil Kapoor. The film stars himself, Sanjay Dutt, Akshaye Khanna, Suniel Shetty, Paresh Rawal, Sushmita Sen, Kangana Ranaut, Neetu Chandra and Shakti Kapoor in the lead roles while Ranjeet, Mukesh Tiwari, Jeetu Verma, Vishwajeet Pradhan, Suresh Menon and Vijay Raaz are featured in supporting yet crucial roles. Shooting began in July 2010. It was shot in South Africa and Mumbai. No Problem released worldwide on 10 December 2010, to a negative critical reception and was a commercial failure. 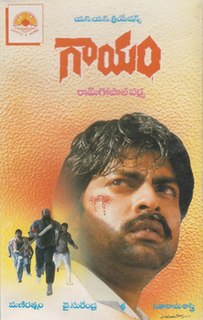 Gaayam is a 1993 Indian Telugu-language political thriller film, based on the 1980s Vijayawada Gang Warfare. Directed by Ram Gopal Varma, and story co-written by himself and Mani Ratnam, it stars Jagapathi Babu, Revathi, Urmila Matondkar and music composed by Sri. Upon its release, the film won six state Nandi Awards in 1993–94.

Tezz (transl. Fast) is a 2012 Indian Hindi-language action thriller film directed by Priyadarshan. It stars Ajay Devgn, Anil Kapoor, Kangana Ranaut, Zayed Khan, Sameera Reddy and Boman Irani. veteran actor Padma BhushanMohanlal appears in a guest role. The stunt choreographer chosen for the movie was Gareth Milne, the stunt co-ordinator of Fantastic 4: Rise of the Silver Surfer and National Treasure: Book of Secrets. The official trailer was released on 4 January 2012. The movie was released on 27 April 2012 in 1950 screens. 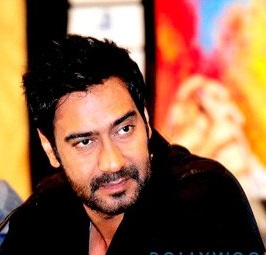 Ajay Devgn is an Indian actor, director, and producer who works in Hindi films. His debut as an actor came in Phool Aur Kaante (1991), which won him the Filmfare Award for Best Male Debut. Devgn then played a kickboxer in the martial arts film Jigar (1992) and a blind character in the film Vijaypath (1994). Further success came with roles in the 1994 box-office hits Suhaag and Dilwale. He garnered his first Filmfare Award for Best Actor nomination for his performance in the action drama Naajayaz (1995). Devgn received critical acclaim for his roles in Pyaar To Hona Hi Tha and the political drama Zakhm, winning National Film Award for Best Actor for the latter. In 1999, he starred in Sanjay Leela Bhansali's Hum Dil De Chuke Sanam, earning a Filmfare Best Actor nomination. In 2000, Devgn established his production house Ajay Devgn FFilms, produced and appeared as the protagonist in the commercially unsuccessful Raju Chacha. He received a Filmfare Award for Best Supporting Actor nomination for his role as a dacoit in the drama Lajja (2001). 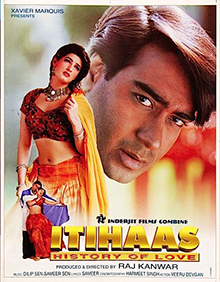 Itihaas (transl. History) is a 1997 Indian Hindi language romantic action thriller film produced and directed by Raj Kanwar. The film stars Ajay Devgn and Twinkle Khanna as the lead protagonists, and Raj Babbar as the antagonist. Amrish Puri, Shakti Kapoor and Mohnish Bahl played supporting roles in the film. The film opened to negative reviews and failed to do well at the box office. 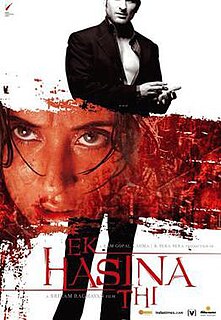 Ek Hasina Thi is a 2004 Indian neo-noir thriller film directed by Sriram Raghavan, produced by Ram Gopal Varma, and starring Urmila Matondkar and Saif Ali Khan in the lead roles. The screenplay was by Sriram Raghavan and Pooja Ladha Surti. The film borrows elements from the Sidney Sheldon story If Tomorrow Comes. In her review, critic Ronjita Kulkarni says that it's "loosely based" on Double Jeopardy, while "the film also adapts a scene from The Bone Collector." The film was premiered at the New York Asian Film Festival. The film is usually considered one of the best works of Urmila Matondkar, Saif Ali Khan and Director Sriram Raghavan.