Dehiwala-Mount Lavinia (Sinhala : දෙහිවල-ගල්කිස්ස, romanized: Dehivala-Galkissa; Tamil : தெஹிவளை-கல்கிசை, romanized: Tehivaḷai-Kalkicai), population 245,974 (2012) [2] is the largest suburb of the City of Colombo, and covers an extent of 2109 hectares. It lies south of the Colombo Municipal Council area and separated from it by the Dehiwala canal which forms the northern boundary of DMMC. Its southern limits lie in Borupana Road and the eastern boundary is Weras Ganga with its canal system and including some areas to its east (Pepiliyana, Gangodawila and Kohuwala). [3] This town has extensive population and rapid industrialisation and urbanization in recent years. It is home to Sri Lanka's National Zoological Gardens, which remains one of Asia's largest. Colombo South Teaching Hospital, Kalubowila and Colombo Airport, Ratmalana are some important landmark in this area. Dehiwela-Mount Lavinia and Sri Jayawardenapura Kotte being two large suburban centres of the city of Colombo function together as one large urban agglomeration in the Region (Western Province). The overspill from the City in residential and commercial uses of land have rapidly urbanised these suburban centers. Dehiwela-Mount Lavinia and Sri Jayawardenpaura along with Colombo Municipal Council form the most urbanised part of the core area of the Colombo Metropolitan Region. Dehiwala and Mount Lavinia lie along the Galle Road artery, which runs along the coast to the south of the country. [4]

There are many stories about the history of this area. One of those is Diya Wala which means a dip or hole filled with water. In past this area consists full of ponds, lakes thus it became known as Diyawala (an area filled with water) and later on it became Dehiwala. Another story in this name regard is that this area has many trees of lime or a forest of lime trees and people call it Dehiwala. It is told that king of Kotte filled all his lime requirements from this area. [3]

Before colonisation of the maritime region by the Portuguese, the area covered by the present DMMC was part of the Kingdom of Kotte. It comprised a number of villages such as Pepiliyana Nedimala, Attidiya and Kalubowila, while Ratmalana and areas south of Dehiwala were together one large expanse of marshland, and scarcely populated. [4]

During the Portuguese occupation, the Kingdom of Kotte was ruled by king Don Juan Dharmapala, and it encompassed the above-mentioned villages. Early records also indicate that in the year 1510 AD the village of “Galkissa” is mentioned and named after the rocky mound (Lihiniyagala) protruding into the Bay. Fascinating tales are woven round this rock and the village “Galkissa”. The Dutch invaders called the mound “the pregnant wench”.

With the arrival of the Dutch in the early seventeenth century, a more organised administrative structure was in place, whereby a broad based taxation and legal system evolved.

However, it was only during British occupation (19th Century) that a Provincial administrative (Kachcheri) system and a form of Local Government developed. When the second Governor of Ceylon, Sir Thomas Maitland, acquired land at "Galkissa" (Mount Lavinia) and decided in 1806 to construct a personal residence there. Maitland fell in love with Lovina Aponsuwa, a local mestiço dancer, and continued a romantic affair with her until he was recalled to England in 1811. The Governor's mansion, which he named "Mount Lavinia House" is now the Mount Lavinia Hotel and the village that surrounded the building has subsequently developed into a bustling area, taking its name from the Governor's mistress, Lovina. Later, the area assumed the name of Mount Lavinia alluding to the factual story of a romance between the then British Governor Thomas Maitland (1805-1812) and a dancing girl called Lovina of the area.

Dehiwela, Mount Lavinia attained Municipal status in December 1959. Dehiwela Mount Lavinia as a Local body of 6 wards extending over a land extent of only 16.3 km2 (1,630 ha (4,000 acres)). Due to rapid urban growth and for administrative reasons this area was extended and divided into 19 wards in 1959 and given Municipal status. Later in 1967 the municipality was increased to an area of approximately 2,109 ha (5,210 acres) was apportioned into 29 wards, as it exists today.

As the Dehiwala-Mount Lavinia area lies on the coastal plain the land is mostly flat and undulating towards the inland areas. A significant feature is the large extent of wetlands around the Weras Ganga (river) and Bolgoda Lake the two major water bodies. The Bellanwila and Attidiya marshes are noteworthy for their bio-diversity and as such are considered as an ecological protected zone. Lying in the wet zone, the Dehiwala-Mount Lavinia area receives an average annual rainfall between 2000 and 3000 mm mainly during the south west monsoon and the intermonsoon periods. Mean average day temperature is around 28 °C and average maximum between 30.5 and 31 °C Minimum night temperature varies from 26 °C to 27 °C. [4]

Dehiwala-Mount Lavinia is a suburb of Colombo Metropolitan Region. Its Municipality comprises the following areas. [5]

Dehiwala-Mount Lavinia is a suburb of Colombo Metropolitan Area, with a Municipal Council form of government. Dehiwala-Mount Lavinia's mayor and the council members are elected through local government elections held once in five years. The city government provides sewer, road management and waste management services, water, electricity and telephone utility services the council liaises with the road development authority, water supply and drainage board, the Ceylon electricity board and telephone service providers.

There are 2 Divisional Secretary in the Dehiwala-Mount Lavinia area

The Sri Lanka Police the main law enforcement agency of the island liaise with the municipal council, but is under the control of the Ministry of Defence of the central government. As with most Sri Lankan cities, the magistrate court handles felony crimes, the district court handles civil cases. There are 3 police stations within the Dehiwala-Mount Lavinia area [10] [11]

Train transport in the city is limited since most trains are meant for transport to and from the city rather than within it and are often overcrowded. Dehiwala-Mount Lavinia situated in the Coastal Line of Sri Lanka Railway which runs from Colombo towards Matara.

Ratmalana Airport is the city's airport, located 15 km (9.3 mi) south of the Colombo city centre and 2 km from Dehiwala junction. It commenced operating in 1935 and was the country's first international airport until it was replaced by Bandaranaike Airport in 1967. Ratmalana Airport now primarily services domestic flights, aviation training and international corporate flights.

Other means of transport includes auto rickshaws (commonly called "three wheelers") and taxicabs. Three wheelers are entirely operated by individuals and hardly regulated whilst cab services are run by private companies and are metered.

Education institutions in Colombo have a long history. Dehiwala-Mount Lavinia has many of the prominent public schools in the country, some of them government-owned and others private. Certain urban schools of Sri Lanka have some religious alignment; this is partly due to the influence of British who established Christian missionary schools. Colombo has many International Schools that have come up in the recent years.

Colombo is the commercial capital and largest city of Sri Lanka by population. According to the Brookings Institution, Colombo metropolitan area has a population of 5.6 million, and 752,993 in the Municipality. It is the financial centre of the island and a tourist destination. It is located on the west coast of the island and adjacent to the Greater Colombo area which includes Sri Jayawardenepura Kotte, the legislative capital of Sri Lanka and Dehiwala-Mount Lavinia. Colombo is often referred to as the capital since Sri Jayawardenepura Kotte is itself within the urban/suburban area of Colombo. It is also the administrative capital of the Western Province and the district capital of Colombo District. Colombo is a busy and vibrant city with a mixture of modern life, colonial buildings and monuments. 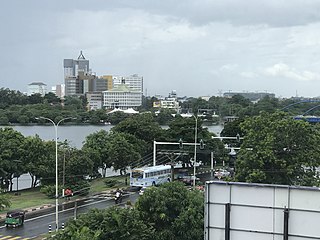 Ratmalana is a suburb in Colombo District, Western Province, Sri Lanka. It is inside the administration boundary of Dehiwala-Mount Lavinia Municipal Council. Ratmalana is situated 14 km south of Colombo city centre. Ratmalana Airport located here was the country's first and main international airport until the inauguration of Bandaranaike International Airport, Katunayake in 1967. Ratmalana is also the birthplace of Sir John Kotelawala, the third Prime Minister of Sri Lanka elected in 1953. 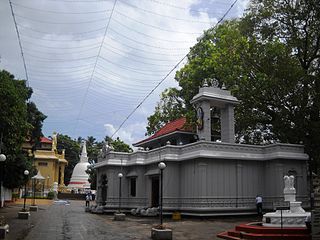 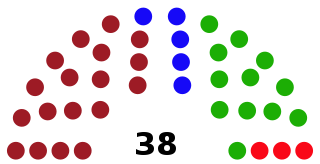 Mount Lavinia is a suburb in Colombo, Sri Lanka located within the administrative boundaries of the Dehiwala-Mount Lavinia municipal limits.

Sri Subodharama Raja Maha Vihara is a historic Buddhist temple situated at Dehiwala in the Western province, Sri Lanka. The temple is located at the Dehiwala junction on the Colombo-Galle main road, about 9 miles south of Colombo city. The temple has been formally recognised by the Government as an archaeological site in Sri Lanka. The designation was declared on 23 February 2007 under the government Gazette number 1486.

Christ Church, is an Anglican church in Dehiwala-Mount Lavinia in Sri Lanka. The church is located on Colombo-Galle main road (A2) approximately 0.35 km (0.22 mi) away from the Dehiwala junction. It was consecrated on 16 February 1843. The four tombs within the church's graveyard have been formally recognised by the Government as archaeological protected monuments in Sri Lanka. The designation was declared on 6 June 2008 under the government Gazette number 1553. 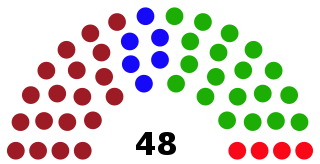 Dehiwala-Mount Lavinia Municipal Council (DMMC) is the local authority for the city of Dehiwala-Mount Lavinia in Sri Lanka. The Council is responsible for providing a variety of local public services including roads, sanitation, drains, housing, libraries, public parks and recreational facilities. It has 48 members elected under the mixed electoral system where 60% of members will be elected using first-past-the-post voting and the remaining 40% through closed list proportional representation.