The demography of England has since 1801 been measured by the decennial national census, and is marked by centuries of population growth and urbanisation. Due to the lack of authoritative contemporary sources, estimates of the population of England for dates prior to the first census in 1801 vary considerably.

See also: Population of the countries of the United Kingdom

Historical percent distribution of the total population by age

Places of birth given by respondents to the 2001 and 2011 censuses were as follows:

Below are the 5 largest foreign-born groups in England according to 2014 ONS estimates. [14]

The 2001 and 2011 censuses recorded the following ethnic groups:

Notes for table above

The most common main languages spoken in England according to the 2011 census are shown below. [17]

Respondents to the 2001 and 2011 censuses gave their religions as follows:

Demographics of Wales include the numbers in population, place of birth, age, ethnicity, religion, and number of marriages in Wales.

Ashfield is a local government district in western Nottinghamshire, England. According to the 2001 UK census, it has a population of 111,387, increasing to 119,497 at the 2011 Census. The district is mostly urban and contains parts of both the Nottingham Urban Area and the Mansfield Urban Area. The area has a tradition of coal mining. There are three towns in the district; the largest being Sutton-in-Ashfield. Settlements in the district include the following:

The Metropolitan Borough of Walsall is a metropolitan borough in the West Midlands, England. It is named after its largest settlement, Walsall, but covers a larger area which also includes Aldridge, Bloxwich, Brownhills, Darlaston, Pelsall and Willenhall. As well as serving as the post town for nearby Cannock Chase District and Lichfield District respectively.

Uppermill is a village in Saddleworth—a civil parish of the Metropolitan Borough of Oldham, in Greater Manchester, England. Historically in the West Riding of Yorkshire, it lies on the River Tame in a valley amongst the South Pennines with the Peak District National Park directly to the east, and is 4.5 miles (7.2 km) east of Oldham, and 11 miles (17.7 km) east-northeast of Manchester. Uppermill forms a continuous urban area with the neighbouring village of Dobcross—the two have a combined population of 7,500.

The demography of London is analysed by the Office for National Statistics and data is produced for each of the Greater London wards, the City of London and the 32 London boroughs, the Inner London and Outer London statistical sub-regions, each of the Parliamentary constituencies in London, and for all of Greater London as a whole. Additionally, data is produced for the Greater London Urban Area. Statistical information is produced about the size and geographical breakdown of the population, the number of people entering and leaving country and the number of people in each demographic subgroup.

Mixed is an ethnicity category that has been used by the United Kingdom's Office for National Statistics since the 1991 Census. Colloquially it refers to British citizens or residents whose parents are of two or more different races or ethnic backgrounds. Mixed race people are the fastest growing ethnic group in the UK and numbered 1.25 million in the 2011 census.

British Iraqis are people whose heritage is originated from Iraq who were born in or who reside in the United Kingdom.

The term Other White is a classification of ethnicity in the United Kingdom and has been used in documents such as the 2011 UK Census to describe people who self-identify as white persons who are not of the English, Welsh, Scottish or Irish ethnic groupings. The category does not comprise a single ethnic group but is instead a method of identification for white people who are not represented by other white census categories. This means that the Other White group contains a diverse collection of people with different countries of birth, languages and religions. Along with White British and White Irish, the category does not appear in Northern Ireland, where only one single "White" classification was presented to respondents. 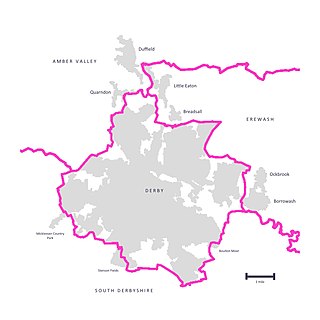 The Derby Built-up Area (BUA) or Derby Urban Area is an area including Derby and adjoining built-up districts of Derbyshire, in the East Midlands of England, including Borrowash and Duffield. The Office for National Statistics defines an urban area as one which is built upon, with nearby areas linked if within 200 metres.