Den Haag Centraal (Dutch pronunciation: [dɛn ˌɦaːx sɛnˈtraːl] ; English: The Hague Central) is the largest railway station in the city of The Hague in South Holland, Netherlands, and with twelve tracks, the largest terminal station in the Netherlands. The station was completed in 1973, adjacent to its predecessor: station Den Haag Staatsspoor, which was subsequently demolished. It is the western terminus of the Gouda–Den Haag railway.

The oldest station in The Hague is Den Haag Hollands Spoor (The Hague Holland's Rail) on the main line from Amsterdam to Rotterdam, opened in 1843 by the Hollandsche IJzeren Spoorweg-Maatschappij (Holland's Iron Railroad Company). This station was built at some distance from the city centre.

In 1870, the Nederlandsche Rhijnspoorweg-Maatschappij (Dutch Rhine-railroad Company) opened a second station in The Hague, Den Haag Rijnspoor (The Hague Rhine Rail) for trains to Gouda and Utrecht. This station was built much closer to the city centre. From 1888 this railroad was the property of the Maatschappij tot Exploitatie van Staatsspoorwegen (State Railway Operation Company); the station was renamed Den Haag Staatsspoor ("The Hague State Rail").

In the 1970s, Nederlandse Spoorwegen decided to build a new Central Station in The Hague and it was decided to build the new station next to Staatsspoor station. The old station was demolished after the new station was completed. A chord was also built to connect the station to the line to Amsterdam. Although Centraal station is the largest station in The Hague, it is served only by terminating trains; Intercity and international trains travelling between Amsterdam and Rotterdam stop only at Hollands Spoor station. Now, The Hague is the only city in the Netherlands which still has two major railway stations.

The main hall of Den Haag Centraal is currently[ when? ] undergoing a renovation in order to increase the railway station's capacity. The roof has been replaced. It is now higher, and made of glass plates placed in a framework of stainless steel. Moreover, more commercial space has been added next to both side entrances, and new tiling is due to be placed. The renovation was planned to finish by the end of 2014 but is still going on as of May 2019

There are 22 scheduled trains per hour that leave Den Haag Centraal on a normal weekday (07:00 - 20:00). Sprinter services call at every station along the way whilst Intercity trains only stop at the major stations. There are 6 trains an hour (each way) connecting Den Haag Centraal with Rotterdam Centraal, 6 train an hour connecting it with Utrecht and 4 with Amsterdam.

Den Haag Centraal is a public transportation hub and a major nodal hub for the tram network run by HTM Personenvervoer. The railway station features two separate sets of platforms.

These are two elevated island platforms serving four tracks, located above and lying perpendicular to the heavy rail tracks, serving lines 2, 3, 4, and 6. Regular lines 2 and 6 use the inner tracks, while the RandstadRail lines 3 and 4 use the outer tracks. They connect directly to the city centre tunnel to the west and the elevated tracks to Ternoot and Beatrixkwartier to the east.

These are two ground-level side platforms and one island platform between them, located parallel to the heavy rail tracks outside the south-western entrance. All other city tram lines that call at the station use these platforms.

The Rotterdam-based RET operates RandstadRail line E, a high-capacity metro service via Leidschenveen and Pijnacker to Rotterdam Centraal station. From there it shares track with line D of the Rotterdam Metro and terminates at Slinge station.

Until August 2016, these services used platforms 11 and 12 of the mainline station, alongside the heavy rail tracks. Since then, two dedicated elevated platforms have come into use. Here, metro trains use the high-level side platforms; the low-level island platform is used by RandstadRail trams in case of emergency, when the connecting tracks via Beatrixkwartier cannot be used.

There is a bus platform above the rail roads, which is connected to the Prins Bernhardviaduct running over the tracks. The platform is accessible from the station's main hall. Several city and regional lines of three different carriers stop here. HTM's bus lines starting with an N are night buses and only run on Fridays and Saturdays. 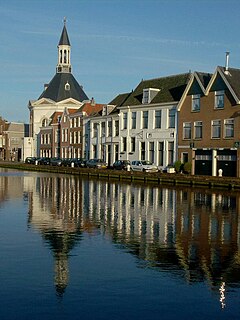 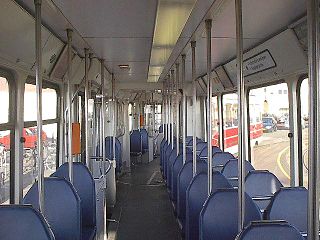 Utrecht Centraal is the transit hub that integrates two bicycle parkings, two bus stations, two tram stops and the central railway station for the city of Utrecht in the province of Utrecht, Netherlands. 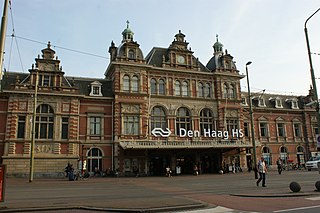 Den Haag HS, an abbreviation of the original name Den Haag Hollands Spoor, is the oldest train station in The Hague, South Holland, Netherlands, located on the Amsterdam–Haarlem–Rotterdam railway. 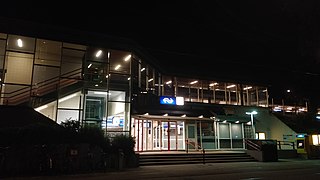 Gouda is a railway station in Gouda, Netherlands. The station opened on 21 May 1855 when the Nederlandsche Rhijnspoorweg-Maatschappij opened the Utrecht–Rotterdam railway. The Gouda–Den Haag railway to The Hague was opened in 1870, and the connection to Alphen a/d Rijn in 1934.

The Hofpleinlijn(Spoorlijn Rotterdam Hofplein - Scheveningen) was one of the two railways between the Dutch cities of The Hague and Rotterdam. In 2006 it was converted to metro-like operation as RandstadRail line E.

High-speed rail service in the Netherlands started at 13 December 2009 with the dedicated HSL-Zuid line that connects the Randstad via Brussels to the European high-speed rail network. In later years improved traditional rail sections were added to the high-speed network. Proposals for more dedicated high-speed lines were deemed too costly; plans for the HSL-Oost to Germany were mothballed and instead of the Zuiderzeelijn the less ambitious Hanzelijn was built to enable future high-speed service between the northern provinces and the Randstad. 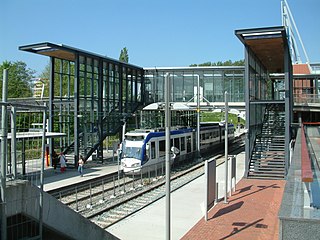 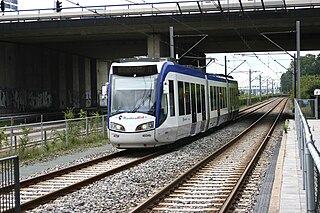 The main public transport in the Netherlands for longer distances is by train. Long-distance buses are limited to a few missing railway connections. Regional and local public transport is by bus, and in some cities by metro and tram. There are also ferries. 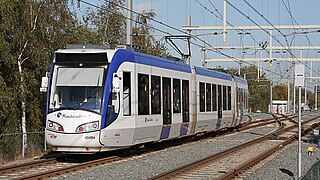