Last updated April 01, 2021
1931 film
This article is about the film. For the short story by Rabindranath Tagore, see Denapaona.

Dena Paona [1] [2] (Bengali : দেনা পাওনা) is a 1931 Bengali film directed by Premankur Atorthy, starring Amar Mullick, Durgadas Bannerjee, Jahar Ganguly, Nibhanani Devi, and Bhanu Bandopadhyay. Based on a novel by Sarat Chandra Chattopadhyay and produced by New Theatres, it is credited as the one of first Bengali talkies, and along with Alam Ara, was one of the first sound films produced in India. The film explored the ills of the dowry system and touched on the problems of female oppression in 19th century Bengal.

Jibananda is a drunkard Zamindar. Ekkari is his companion in all his sinful deeds and greed for money. Sorashi is the priestess in the local Chandi Temple and the estranged wife of Jibananda. She is adamant and stubborn, but responsible and honest. She has immense influence in certain sections of local society. When Sorashi was young, she was known as Alaka. Circumstances force Sorashi to stay whole night in the drunk Jibananda's house. This created a ripple amongst the local villagers when they come to know about this incident. But Sorashi gave a legal statement to the police and Magistrate that she went to the Zamindar's house willingly. Jibananda was freed from all offences due to this statement. But the village leaders were very strict about their decision. Sarbeswar Shiromani, Mr. Chowdhury, and Janardan Roy decided not to assign the responsibility of a priestess of the temple to Sorashi any more. Nirmal, the son-in-law of Sabeswar Shiromani, is very impressed by the attitude and intelligence of Sorashi. Jibananda later tries to make advances on Sorashi but she refuses him, making him angry. He attempts to evict her from her shelter. Sagar and his team wait for Sorashi's order to fight against Jibananda. But Sorashi is totally dispassionate and decides to leave the temple as well as the village forever. This brings an unexpected change in Jibananda as he realises his mistakes and surrenders to Sorashi. In response to which she accepts his unconditional apology and accepts him.

New Theatres is an Indian film studio. It was formed in Calcutta by producer B. N. Sircar. It was formed on 10 February 1931. Motto of this company was– Jivatang Jyotiretu Chhayam. Sircar preferred to function

roughly analogous to what in USA was known as an executive producer. He built a processing laboratory... and got around him a devoted band of people.... Having decided on or approved a story or a subject for a film and the team to make it [Sircar] ensured that adequate funds were provided... but refrained from interfering with its execution. He made New Theatres a symbol of Bengali cinema's artistic good taste and technical excellence.

Parash Pathar is a 1958 Bengali language Indian fantasy comedy film. It was Satyajit Ray's first film outside of The Apu Trilogy. It was also his first comedy and first magical realist film. Adapted from a short story of the same name by Parasuram, the film offered an early glimpse of Ray's sense of humour, centered on a middle-class clerk who accidentally discovers a stone that can turn other objects into gold.

Jamai Shashthi is a 1931 Bengali short film directed by Amar Choudhury and produced by Madan Theatre Limited. It is a milestone of Bengali cinema as it was the first Bengali short film as a talkie. It was released at Crown Cinema Hall in Calcutta on 11 April 1931, in the same year as Alam Ara, the first Indian talkie.

The Holy Island is a 1959 Bengali film directed by Debaki Bose. The film won the National Award for the Best Film and the Best Child Actress in 1959. The award was presented by the first President of India – Dr Rajendra Prasad and the then Prime Minister Jawaharlal Nehru. It was screened at the 9th Berlin International Film Festival.

Kapalkundala is a Bengali romance novel by Indian writer Bankim Chandra Chattopadhyay. Published in 1866, it is a story of a forest-dwelling girl named Kapalkundala, who fell in love with and married Nabakumar, a young gentleman from Saptagram, but eventually found that she is unable to adjust herself with the city life. Following the success of Chattopadhyay’s first novel Durgeshnandini, he decided to write about a girl who is brought up in a remote forest by a Kapalika and never saw anyone but her foster-father. The story is set in Dariapur, Contai in modern-day Purba Medinipur district, Paschimbanga where Chattopadhyay served as a Deputy Magistrate and Deputy Collector.

Durgeshnandini is a Bengali historical romance novel written by Indian writer Bankim Chandra Chattopadhyay in 1865. Durgeshnandini is a story of the love triangle between Jagat Singh, a Mughal General, Tilottama, the daughter of a Bengali feudal lord and Ayesha, the daughter of a rebel Pathan leader against whom Jagat Singh was fighting. The story is set in the backdrop of Pathan-Mughal conflicts that took place in south-western region of modern-day Indian state of Paschimbanga during the reign of Akbar.

Kapalkundala is a 1933 Bengali social family film directed by Premankur Atorthy for New Theatres Ltd. Calcutta. The film starred Uma Sashi, Durgadas Bannerjee, Manoranjan Bhattacharya and Molina Devi. Kapalkundala was a famous Bengali novel written by Bankimchandra Chattopadhyay in 1866. This was the second remake of Kapalakundala, the first being made in 1929 by Priyanath Ganguly. The film was made three more times: 1939, 1952, 1980. The film did well celebrating a run of twenty-five weeks.

Chirakumar Sabha is a 1932 Indian Bengali film directed by Premankur Atorthy. The music of the film was composed by R. C. Boral who used Tagore's songs as lyrics. It was one of the first of Rabindranath Tagore's works to be made into a film. The film was remade in 1956 by Debaki Bose. The story revolves around a group of hardened bachelors who meet on a regular basis, and eventually settle for marriage.

Pujarin is a 1936 Hindi social film. It was directed by Prafulla Roy for International Film Craft. The film was based on a story by writer Sarat Chandra Chattopadhyay from his story "Dena Paona". The film was the remake of the Bengali film Dena Paona directed by Premankur Atorthy. The music direction was by Timir Baran with lyrics by Pandit Bhushan and Kidar Sharma.The film starred K. L. Saigal, Chandrabati Devi, K. C. Dey, Pahari Sanyal and Rajkumari. The story is about a reckless immoral youth who marries for money then deserts his wife due to circumstances, only to return as an aristocrat and reform through the love of his wife.

Sathi is a 1938 Indian Bengali film directed by Phani Majumdar and produced by New Theatres. It was the Bengali version of Street Singer and the film was the debut of Phani Majumdar as a director. The film's cast includes K. L. Saigal, Kanan Devi, Boken Chatto, Amar Mullick, Sailen Chowdhury, and Shyam Laha. The story involves two young street children growing up together, singing on the streets and hoping to make it big in the show world. The film was one of Saigal's "most famous films" and a "classic" as far the music and songs of the films were concerned. The music was composed by R. C. Boral with lyrics by Ajoy Bhattacharya.

Dui Purush is a 1945 Bengali language epic family drama film directed by Subodh Mitra. Produced by New Theatres and adapted from Tarashankar Bandyopadhyay's novel and popular stage play, with a screenplay by Binoy Chatterjee. The editing was done by Mitra, who was popularly known as Kachi Babu, and cited as one of the best editors in the film industry. The music director was Pankaj Mullick with lyrics by Sailen Roy. The cinematographers were Sudhin Majumdar and Yusuf Mulji. The cast included Chhabi Biswas, Chandrabati Devi, Sunanda Banerjee, Ahindra Choudhury, Tulsi Chakraborty, Jahar Ganguly, and Naresh Mitra.

Abhagin is a 1938 Hindi film directed by Prafulla Roy for New Theatres Ltd., Calcutta. A bilingual, it was made in Bengali language as Abhigyan. The film was based on a story by Upendranath Ganguly, with dialogues by A. H. Shore. R. C. Boral provided the music composition with lyrics for the Hindi version by Munshi Arzu, and by Ajoy Bhattacharya for the Bengali. The screenplay was by Phani Majumdar for whom it was his first independent film as a scriptwriter. Bimal Roy, who was to make a name for himself as a prominent Bengali and Hindi director, was the cinematographer for the film. The cast included Molina Devi, Prithviraj Kapoor, Vijay Kumar, Nemo and Bikram Kapoor. 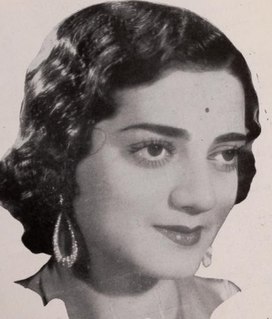 Sabita Devi (1914–1965) was a Hindi film actress in Indian cinema. She is stated to be one of the "prominent" leading ladies of the "pioneering era" of Indian cinema along with Mehtab, Bibbo, Durga Khote, Gohar, Devika Rani and Seeta Devi. A Jewess by birth, she changed her name to find acceptability in Hindi cinema like the other Anglo-Indian and Jewish actresses of her time, Sulochana, Seeta Devi, Madhuri, and Manorama. After initially working with British Dominion Films Ltd., Calcutta, she shifted to Bombay and performed mainly in films produced by Sagar Movietone with her co-star in most films being Motilal. Some of the popular films with Motilal were Dr. Madhurika (1935) and Kulvadhu (1937) directed by Sarvottam Badami. Their first film together was Shaher Ka Jadoo (1934), which was also Motilal's debut film, and then Lagna Bandhan (1936) both directed by Kaliprasad Ghosh. She acted in Silver King (1935) with Motilal. It was an action film directed by C. M. Luhar, which became a "huge success".

Mriter Martye Agaman is a Bengali fantasy comedy film directed by Pashupati Chatterjee. This film was released in 1959 under the banner of Miracle India Private Limited.

Manmoyee Girls' School is a 1935 Indian Bengali-language romantic comedy film directed by Jyotish Bannerjee. It is based on Rabindranath Maitra's 1932 play of the same name. The film stars Tulsi Chakraborty, Jahar Ganguly and Kanan Devi. It was a success, and was remade again in Bengali under the same title in 1958.

Grihapravesh is a Bengali drama film directed by Ajoy Kar. This movie was released on 12 Nov. 1954 in the banner of Naba Chitrabharati Ltd. The music direction was done by Mukul Roy. It stars Uttam Kumar, Suchitra Sen, Bhanu Banerjee, Tulsi Chakraborty, and Anil Chatterjee in the lead roles.

Durgadas Bannerjee , was a Indian film actor of Bengali descent who appeared in many roles from 1922 to 1943.

Umasashi , was a Indian film actress of Bengali descent who appeared in many roles from 1929 to 1951. Her on-screen pairings with actors such as Durgadas Bannerjee, K.L. Saigal, Pahari Sanyal and Prithviraj Kapoor were popular on those days.