Approximately 28-30% of the land is plain, 25% is high plateau and tableland, and 47% is mountainous. At 2571m Mount Honaz is the highest in the province, and indeed in Western Anatolia. Babadag in the Mentes range has a height of 2308 meters. The biggest lake in Denizli is Acıgöl, which means bitter lake and indeed industrial salts (sodium sulphate) are extracted from this lake which is highly alkaline. There is a thermal spring to the west of Sarayköy, at the source of the Great Menderes River, which contains bicarbonates and sulfates. There is another hot spring in Kızıldere which reaches 200˚C.

A geothermal steam source was first found in the region in 1965 during drilling work. Today there is a power plant producing electricity from the geothermal steam. Only 11% of the geothermal energy source is used to produce electricity and 89% of it, which flows into the Great Menderes, is 150˚C at source (it is contains energy equal to 35,000 to 40,000 tonnes of fuel oil).

In general the Aegean region has a Mediterranean climate. Temperatures can rise to 40 °C during summer and fall to -5 °C in winter. There are about 80 days with precipitation, mainly during winter.

There are traces of prehistoric cultures throughout the province, including evidence of pre-Hittite cultures and the Hittites themselves. The Hittites were followed by Phrygians, Lydians and Persians, and then cities founded by the ancient Greeks and Alexander the Great. The first real settlement was the city of Laodicea on the Lycus which was established by King Antiochus II for his wife Laodice. Laodicea is located 6 km north of the city of Denizli.

The city of Hierapolis was established around 190 BC by the Pergamene Kingdom, one of the Hellenistic states of Anatolia. The calcified terraces and pools of Pamukkale (Cotton Castle) now stand below the ruins of Hierapolis. The two cities, Laodicea and Hierapolis later came under Roman rule, and with the division of the Empire in 395 were left within the boundaries of the East Roman Empire.

The province has strong biblical connections: in the Book of Revelation, John the Evangelist hears a loud voice which sounded like a trumpet when he was on the island of Patmos. The voice says: "Write down what you see and send the book to the Churches in these seven cities: Ephesus, Smyrna, Pergamum, Thyatira, Sardis, Philadelphia and Laodicea". The Church of Laodicea was a sacred place even in pre-Christian times, and is still visited by Christians today, although it lost its importance to a great extent during Byzantine rule.

Turks were first seen in Denizli in 1070 when Afşın Bey, under the control of the Seljuk Sultan Alp Arslan, raided the area. The second and third Crusades fought here against Kazıkbeli, who managed to flee with a small force to Antalya. Later, after the Turks had established control of the ancient cities, they moved south to the site of the present city of Denizli, where drinking water was brought through stone pipes. The name Laodicea slowly changed into “Ladik” then since the 17th century other names were given “Tonguzlu”, ”Tonuzlu”, ”Tenguzlug”, ”Donuzlu” and finally “Denizli”.

After World War I, when the Greek army arrived in İzmir on May 15, 1919, one of the first centres of Turkish resistance formed at an open-air meeting in Denizli. A Turkish militia formed lines on the Menderes organized by Yörük Ali and Demirci Efe, involving large numbers of volunteers from the local peasantry. Stiffened by the Turkish regular army, Greek forces were repelled, and Denizli remained in Turkish hands throughout the Greco-Turkish War.

see the article on Denizli and other districts for more details.... near Denizli...

and near the other districts in the province....

Denizli is renowned in Turkey for having a famous breed of cock, renowned for its appearance and colour, along with its prolonged and melodious crows. Great effort is taken by the state and local farmers to preserve the breed. In appearance the Denizli cock has black eyes, dark grey legs, a long neck, and a red crown. It weighs 3-3.5 kg, and has a distinctive crow. 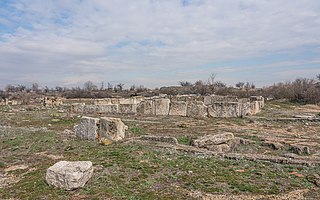 Colossae was an ancient city of Phrygia in Asia Minor, and one of the most celebrated cities of southern Anatolia. The Epistle to the Colossians, an early Christian text which identifies its author as Paul the Apostle, is addressed to the church in Colossae. A significant city from the 5th century BC onwards, it had dwindled in importance by the time of Paul, but was notable for the existence of its local angel cult. It was part of the Roman – and then Byzantine – province of Phrygia Pacatiana, before being destroyed in 1192/3 and its population relocating to nearby Chonae.

Denizli is an industrial city in the southwestern part of Turkey and the eastern end of the alluvial valley formed by the river Büyük Menderes, where the plain reaches an elevation of about three hundred and fifty metres (1,148 ft). Denizli is located in the country's Aegean Region.

Pamukkale, meaning "cotton castle" in Turkish, is a natural site in Denizli Province in southwestern Turkey. The area is famous for a carbonate mineral left by the flowing of thermal spring water. It is located in Turkey's Inner Aegean region, in the River Menderes valley, which has a temperate climate for most of the year.

Çivril is a town and district of Denizli Province in the inner Aegean region of Turkey. Çivril district area neighbors those of two districts of Uşak Province to its north, namely Sivaslı and Karahallı, and four districts of Afyonkarahisar Province from the north-east to the south which are, clockwise, Sandıklı, Dinar, Dazkırı and Dazkırı, and to its south-west, three districts of the same province as itself depending Denizli. These last three are Bekilli, Çal and Baklan.

Güney is a town and district of Denizli Province in the inner Aegean region of Turkey. Güney district area neighbors those of four other districts of the same province from east to west, clockwise Buldan, Akköy, Denizli central district and Çal and ranges Eşme district of Uşak Province in the north.

Sarayköy is a town and district of Denizli Province in Turkey, 20 km west of the city of Denizli, on a plain between mountains and watered by Büyük Menderes River. The area is around 470 km², and the population (2010) is 29,854 of which 18,510 live in the town of Sarayköy, and the rest in surrounding villages.

Sultanhisar is a town and a small district of Aydın Province in the Aegean region of Turkey, 30 km east of the city of Aydın on the road to Denizli.

Bozkurt is a town and a rural district of Denizli Province in the Aegean Region of Turkey. The town is situated on a plain 52 km (32 mi) east of the city of Denizli. The altitude of the town is 866.8 m, and the district area is around 400 km2 (150 sq mi). The population is 11,738 of which 4,589 live in the small town of Bozkurt itself. It is quite close to the Lake Acıgöl and the neighboring town of Çardak and İnceler Kasabası

Buldan is a town and a district of Denizli Province in the inner Aegean Region of Turkey. Buldan district area neighbors to the east and the south three other districts of the same province, namely Güney, Akköy and Sarayköy, and to the west by the areas of three districts of Aydın Province, Buharkent, Kuyucak and Karacasu, and to the northwest by Sarıgöl district of Manisa Province.

Çardak is a town and a district of Denizli Province of Turkey. It is situated on the road from Denizli to Ankara near the banks of the Lake Acıgöl.

Hierapolis was an ancient Greek city located on hot springs in classical Phrygia in southwestern Anatolia. Its ruins are adjacent to modern Pamukkale in Turkey and currently comprise an archaeological museum. The site has the Tomb of Philip the Apostle.

Beycesultan is an archaeological site in western Anatolia, located about 5 km southwest of the modern-day city of Çivril in the Denizli Province of Turkey. It lies in a bend of an old tributary of Büyük Menderes River.

Yenicekent is a depending township in Buldan district, Denizli Province in southwestern Turkey. The region is notable for its high plains covered with dense forests. Yenicekent is also the site of ancient Tripolis of Phrygia.

Attuda or Attouda was a Hellenistic city in ancient Caria and later in the Roman province of Phrygia Pacatiana. There are coins of the place with the Greek epigraph Ἱερὰ Βουλὴ Ἀττουδέων, of the time of Augustus and later. The coins show that the Men Carus was worshipped there.