Denizlispor, due to current sponsorship Yukatel Denizlispor, is a Turkish sports club based in Denizli. It is known by its distinct green and black colors. The club's branches include football, volleyball, basketball, table tennis, and gymnastics. The Denizlispor football squad, which was founded in 1966, is the largest and most popular of the club’s teams. The team plays its home matches at the Denizli Atatürk Stadium, which has a seating capacity of up to 19,500 fans.[ citation needed ]

Denizlispor finished fifth in the 2001–02 Süper Lig, which qualified them for the UEFA Cup. In the 2002–03 UEFA Cup, the team defeated FC Lorient, Sparta Prague, and Olympique Lyonnais, before losing in the fourth round to FC Porto, who won the tournament.

Denizlispor Kulübü was founded on May 26, 1966 as a merger of two smaller youth sports clubs, Çelik Yeşilspor Gençlik and Pamukkale Gençlik. They joined to form what is now Denizlispor, which was at the time a little-known sports & youth club in the Çaybaşı district of Denizli city. This union was then registered with Turkish football's governing body, the Turkish Football Federation (TFF) under the name of Denizlispor Youth Club. The new football team joined Turkish football's 2nd division for the upcoming season on July 14, 1966. Turkish Football Federation. Denizlispor's the best success was 5th twice in 2001–2002 and 2003–2004 seasons. Denizlispor's form declined after 2004–2005 season and struggled avoiding from relegation. Denizlispor drew 1–1 with Fenerbahçe and gave the championship to Galatasaray S.K., Fenerbahçe's archrival at last week in 2005–2006 season. Denizlispor remained in Super League despite 3–0 loss to Ankaragücü at away match on May 24, 2009, due to has an advantage against Konyaspor on dual average in 2008–2009 season. Denizlispor was relegated to TFF First League at next season after goalless draw with Ankaragücü at home match on April 24, 2010.

The Denizlispor emblem was designed by Yakup Ünel, a founding member of the team. The emblem is based around the rooster which is identified with the province of Denizli. The team's colours come from the colours of a type of rooster with green and black feathers unique to Denizli region.

Denizlispor play their home matches in Denizli Atatürk Stadium. The stadium holds 15,427 people and was built in 1950. Denizlispor's first league match played against Eskişehirspor in 1983. The stadium does not have wire nets. [1]

Eskişehirspor is a Turkish professional football club located in Eskişehir. Founded in 1965, Eskişehirspor competed in the first league for 16 years until they were relegated. After being out of the Süper Lig for 12 years the club won the TFF First League playoffs and were promoted in May 2008.

This page details football records and statistics in Turkey.

The 2009–10 season was the 105th season of competitive football in Turkey. 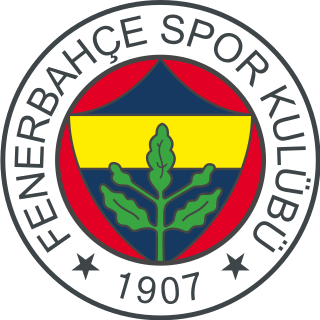 Fenerbahçe S.K., commonly known as Fenerbahçe, is a Turkish professional football club based in Istanbul, Turkey. The club's name comes from Fenerbahçe neighbourhood of Istanbul. The professional football department are the most notable one of Fenerbahçe SK, a major multi-sport club who compete in football, basketball, volleyball, athletics, swimming, sailing, rowing, boxing, and table tennis, among others, with many major honours won in each department. Fenerbahçe are one of the most successful and best supported football teams in Turkey, having never been relegated to lower divisions, and currently compete in the Turkish Super League and the Turkish Cup. They are nicknamed Sarı Kanaryalar and the team play their home games at Şükrü Saracoğlu Stadium, their own traditional home ground in Kadıköy, Istanbul.