The stadium's capacity is 42,300. The highest recorded attendance at the stadium was Albirex Niigata's home fixture against Omiya Ardija on 23 November 2003, the final day of the 2003 J. League Division 2, with 42,223 fans attending. [1]

In 2007, Tohoku Electric Power bought the naming rights to the Niigata Stadium for ¥120 million/year, retitling the stadium as the "Tohoku Denryoku Big Swan Stadium". [2] In September 2013, Denki Kagaku Kogyo (Denka) bought the naming rights for ¥70 million/year, and the stadium was rebranded as the "Denka Big Swan Stadium" in a 3-year deal. [3] [4]

Vegalta Sendai is a Japanese professional football club, currently playing in J1 League. The team is located in Sendai, Miyagi Prefecture. Their home stadium is Yurtec Stadium Sendai, in Izumi-ku, Sendai, although a few home games have also been played at nearby Miyagi Stadium. 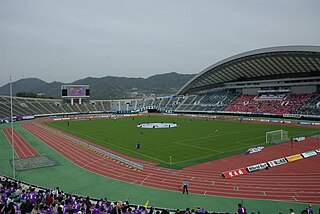 The Hiroshima Big Arch, known under current sponsorship as Edion Stadium Hiroshima, is a multi-purpose stadium in Hiroshima, Japan. It used mostly for association football matches and also for athletics. The venue is the home of J. League club Sanfrecce Hiroshima. It has a capacity of 36,894. It is an all-seater. It was formerly known as Hiroshima Park Stadium. 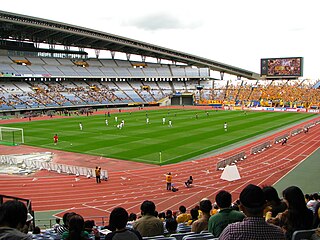 Niigata Station is a major railway station in Chūō-ku, Niigata, Japan, operated by East Japan Railway Company. The station is at the centre of Niigata city, the largest city on the Sea of Japan coast in Honshu. It forms the central station for the railway infrastructure along the Sea of Japan coast, and is also the terminus of the Jōetsu Shinkansen high-speed line from Tokyo.

Kita-ku is one of the eight wards of Niigata City, Niigata Prefecture, in the Hokuriku region of Japan. As of 1 September 2018, the ward had an estimated population of 74,559 in households and a population density of 690 persons per km². The total area of the ward was 107.72 square kilometres (41.59 sq mi).

Chūō-ku is one of the eight wards of Niigata City, Niigata Prefecture, in the Hokuriku region of Japan. It comprises much of the city centre. As of 1 September 2018, the ward had an estimated population of 183,231 in 87,162 households and a population density of 4,900 persons per km². The total area of the ward was 37.75 square kilometres (14.58 sq mi).

Niigata Athletic Stadium is a sports venue in Niigata, Japan, and was the home of the Albirex Niigata football team until they moved to the Big Swan in 2001. The stadium is an athletics stadium which has hosted major Japanese athletic events, including the 1964 National Sports Festival. Albirex Niigata Ladies also use the stadium. 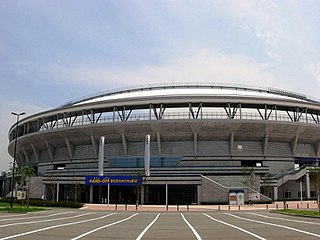 Niigata Prefectural Baseball Stadium (新潟県立野球場) is a baseball stadium in Niigata, Niigata opened on July 1, 2009. It is primarily used for baseball and is the home of the Niigata Albirex Baseball Club. The stadium hosted one NPB All-Star Game in 2010.

Masaru Kato is a Japanese footballer who plays as a midfielder for Avispa Fukuoka on loan from Albirex Niigata.

The Akita Northern Happinets are a Japanese professional basketball team based in Akita that competes in the Eastern Conference of the First Division of the B.League. The team was formed as an expansion team of the bj league in 2010 and found success for the first time in 2013–14, finishing their fourth season as league runners-up. They went on to finish as runners-up for the second year in a row in 2014–15 and in third place in 2015-16, the final season of the bj league.

Tatsuro Inui is a retired Japanese football player. He plays as a Winger, comfortable on both flanks. Apart from his speed and dribbling skills, the ability to take set pieces is also part of his key attributes.

The 2014 S.League was the 19th season since the establishment of the S.League, the top-flight Singaporean professional league for association football clubs. The league was also known as the Great Eastern Yeo's S.League due to sponsorship reasons. Tampines Rovers were the defending champions.

The 2015 J.League Cup, also known as the 2015 Yamazaki Nabisco Cup for sponsoring purposes, is the 40th edition of the most prestigious Japanese soccer league cup tournament and the 23rd edition under the current J.League Cup format.

Kei Koizumi is a Japanese football player who currently plays for Kashima Antlers in the J1 League. He is primarily a central midfielder but can also play at full-back.