Born in Birkenhead, Cheshire, he began his career as an actor in the late 1940s, appearing in small film parts, such as Poet's Pub, in 1949, before switching to become a producer with BBC Television in the early 1950s. [1] Later, in 1955 he became the first Head of Drama at the ITV contractor ABC Weekend TV, who went on air in 1956, serving the Midlands and the North of England at weekends. [2] He also produced episodes of The Adventures of the Scarlet Pimpernel (1956), also directing a couple of episodes. [3]

At ABC, Vance oversaw the creation of the anthology drama series Armchair Theatre , which was networked nationally across the ITV regions on Sunday evenings. It became an important long running landmark in British television drama series. Vance, however, left the Head of Drama role in 1958 for a promotion within ABC, being replaced by Sydney Newman. [4]

Later in his career he returned to producing and directing work, helming episodes of programmes such as ABC's The Avengers (1961) and Thames' The Rivals of Sherlock Holmes (1971). [5] He also produced and directed The Misfit and The Bass Player and the Blonde for ATV. [6] [7] He also directed episodes of 'Public Eye'. [8]

He had been a Fleet Air Arm pilot during the Second World War, and was married six times with one child from the first three marriages. He died in Wimbledon, London in 1983, at the age of fifty-nine. [1]

ABC Weekend TV was a British television broadcaster within the Independent Television (ITV) network, which provided a weekend service to the Midlands and Northern England from 1956 to 1968. It was one of the "Big Four" companies that between them produced the majority of ITV networked programmes during this period.

George Sewell was an English actor, best known for his television roles, but also active on stage and in films.

No Trams to Lime Street is a 1959 British television play, written by the Welsh playwright Alun Owen for the Armchair Theatre anthology series. Produced by ABC Weekend TV for transmission on the ITV network, the play was broadcast on 18 October 1959. The original version no longer exists.

Out of This World is a British science fiction anthology television series made by the ITV franchise ABC Television for ITV. It was broadcast on ITV in 1962. A spin-off from the Armchair Theatre anthology series, each episode was introduced by the actor Boris Karloff. Many of the episodes were adaptations of stories by science fiction writers including Isaac Asimov, Philip K. Dick and Clifford D. Simak. The series is described by the British Film Institute as a precursor to the BBC science fiction anthology series Out of the Unknown, which was produced by Out of This World creator Irene Shubik after she left ABC. 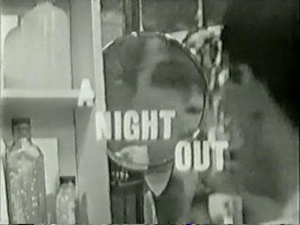 A Night Out is a play written by Harold Pinter in 1959.

Richard Harris is a British television writer, most active from the early 1960s to the mid-1990s. He writes primarily for the crime and detective genres, having contributed episodes of series such as The Avengers, The Saint, The Sweeney, Armchair Mystery Theatre, and Target. He has helped to create several programmes of the genre, including Adam Adamant Lives!, Man in a Suitcase, and Shoestring. Despite a career that has been largely spent writing for the crime and detective genre, in 1994 he won the prize for best situation comedy from the Writers' Guild of Great Britain for Outside Edge, a programme he had originated as a stage play. Though the majority of his work has been for television, a substantial amount of his output has been for the stage.

This is a list of British television related events from 1956.

"Underground" was a science fiction television play presented as part of the British anthology series Armchair Theatre which was broadcast live by the ITV commercial network on 30 November 1958. It is chiefly remembered because an actor had a fatal heart attack during transmission.

Jim Goddard was an English film and TV director who was born in Battersea, London. He directed episodes of many UK TV series such as Public Eye, Callan, Special Branch, The Sweeney, The Ruth Rendell Mysteries, The Bell and Holby City. He may be best known outside England for the TV series Kennedy starring Martin Sheen or directing the film Shanghai Surprise as a vehicle for newlyweds Sean Penn and Madonna.

Theatre Royal, aka Lilli Palmer Theatre is an Anglo/American half-hour television anthology series hosted by Lilli Palmer. It was the first ITV play series; and was first transmitted on 25 September 1955, with the televised Dickens episode, Bardell v Pickwick. Thirty-four episodes aired in the UK on ATV London in 1955–56. Fourteen episodes aired in the US from 1955–56.

ITV Play of the Week is a 90-minute UK television anthology series produced by a variety of companies including Granada Television, Associated-Rediffusion, ATV and Anglia Television. From 1956 to 1966 approximately 500 episodes aired on ITV. The first production was Ten Minute Alibi, produced by Associated-Rediffusion on 14 May 1956 while the earliest to survive is There Was a Young Lady, transmitted on 23 July 1956 and was telerecorded. The first production not to be transmitted live was Henrik Ibsen's The Wild Duck which was also film recorded. The first to be pre-recorded on videotape was Mary Broome, a Granada production broadcast on 3 September 1958. Subsequently, only one play was transmitted live, Associated-Rediffusion's Search Party on 26 July 1960. The recording of The Liberty Man, a Granada production broadcast on 1 October 1958, contains the original advertisements during the first commercial break. The Violent Years was networked from Anglia on its opening night, 27 October 1959, and exists at the University of East Anglia.

Armchair Mystery Theatre is a 60-minute UK television anthology mystery series. Thirty-four episodes aired from 1960–1965. It was hosted by Donald Pleasence and produced by Leonard White. It was a spin-off from the successful Armchair Theatre series.

Afternoon of a Nymph is an episode of the British Armchair Theatre series made by the ITV franchise holder ABC Television and first broadcast by the ITV network on 30 September 1962. It was written by Robert Muller and features Janet Munro and Ian Hendry in the lead roles. It was directed by Philip Saville and produced by Sydney Newman.