Last updated February 03, 2023
Ukrainian lawyer and politician (1980–2023)
In this name that follows Eastern Slavic naming conventions, the patronymic is Anatoliiovychand the family name is Monastyrsky.

Denys Anatoliiovych Monastyrsky (Ukrainian : Денис Анатолійович Монастирський; 12 June 1980 – 18 January 2023) was a Ukrainian lawyer and politician who served as Ukraine's Minister of Internal Affairs from 16 July 2021, until his death in a helicopter crash on January 18, 2023. [1] [2] [3] He had been very close to Volodymyr Zelenskyy since the beginning of his presidential campaign. [4]

Denys Anatoliiovych Monastyrsky was born in Khmelnytskyi, in what was then the Ukrainian Soviet Socialist Republic of the Soviet Union, on 12 June 1980. [5] He was a graduate of Faculty of Law of the Khmelnytskyi University of Management and Law. [5] Monastyrsky was also a former student at the Koretsky Institute of State and Law of the National Academy of Sciences of Ukraine. [5] He had a PhD in law. [5]

In 2007, Monastyrsky started his career as a lawyer. [5] He also headed the department of lawmaking and scientific expertise of the research part of the Khmelnytskyi University of Management and Law, where he worked as an associate professor. [6]

Monastyrsky was a co-founder and a member of the board of the Podolia Youth Cultural Association "Into the Future through Culture". [5] [6]

Between 2014 and 2019, Monastyrsky was an assistant-consultant to Anton Herashchenko. [6]

In the run-up to the 2019 Ukrainian presidential election Monastyrsky was presented as an expert of presidential candidate Volodymyr Zelenskyy's "team" on law enforcement reform. [6] Zelenskyy won the election and was inaugurated as President of Ukraine on 20 May 2019. [7]

In parliament, he became head of the parliamentary Committee on Law Enforcement Affairs. [5] According to an analysis by Civil movement "Chesno" he was one of the people's deputies who submitted the most legislative initiatives. [6]

After Interior Minister Arsen Avakov had submitted his resignation as Interior Minister on 12 July 2021, [9] Monastyrsky was appointed Minister of Internal Affairs by 271 MPs on 16 July 2021. [1] [2] Anton Herashchenko became one of his official advisors at the Ministry. [10]

In September 2022, Monastyrsky participated in the largest prisoner exchange operation between Ukraine and Russia, when 215 Ukrainian soldiers returned home, including more than 100 fighters and commanders of the Azov Regiment. [11]

Throughout the war, Monastyrsky was among the top security officials who remained in Kyiv, the capital, with Zelenskyy in the first days of the war as Russia's army bore down on the city. [12] As Ukraine's minister for internal affairs, he helped shape Ukraine's wartime goals and oversaw the country's National Police, State Emergency Service and the State Border Guard Service. [13]

Monastyrsky, along with his deputy Yevhen Yenin, and Secretary of State of the Ministry of Internal Affairs Yurii Lubkovych, were killed in a helicopter crash on 18 January 2023, in Brovary, an eastern suburb of the capital Kyiv. The helicopter hit a kindergarten school as it crashed, and a child was among the 14 killed. At least 25 others were injured. [3]

Kyrylo Tymoshenko said at a briefing that the officials were heading to one of the hot spots of the war front. [14] The Security Service of Ukraine has started an investigation into the cause of the crash in Brovary. [15]

Monastyrsky's friend and MP Maria Mezentseva said it was "a tragedy for everyone" as Mr. Monastyrsky's ministry was playing a key role in Ukraine's response to the invasion. He was also very close to Zelenskyy from day one of his presidential campaign, she told the BBC. [16]

The funeral ceremony for Monastyrsky and other ministry employees who were killed took place in Ukrainian House on 21 January 2023. Top officials, including Zelenskyy and his wife, Olena Zelenska, attended the funeral, offering condolences to the relatives of the crash victims. [17] 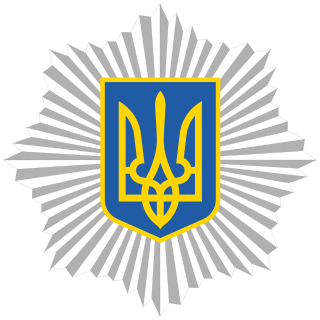 The Ministry of Internal Affairs of Ukraine is the ministry of the Ukrainian government that oversees the interior affairs of Ukraine. The ministry carries out state policy for the protection of rights and liberties of citizens, investigates unlawful acts against the interest of society and state, fights crime, provides civil order, ensures civil security and traffic safety, and guarantees the security and protection of important individuals. It is a centralised agency headed by the Minister of Internal Affairs. The ministry works closely with the office of the General Prosecutor of Ukraine. It oversees the National Police of Ukraine, National Guard of Ukraine (gendarmerie), the State Emergency Service of Ukraine, State Border Guard Service of Ukraine and the State Migration Service.

Yuriy Vitaliyovych Lutsenko is a Ukrainian politician whose most recent post was Prosecutor General of Ukraine from 12 May 2016 until 29 August 2019.

Kreminna is a city in Sievierodonetsk Raion of Luhansk Oblast of Eastern Ukraine. Prior to 2020, it served as the administrative center of former Kreminna Raion. It has a population of 18,116. The city was occupied by Russian Armed Forces on 18 April 2022 during the 2022 Russian invasion of Ukraine. 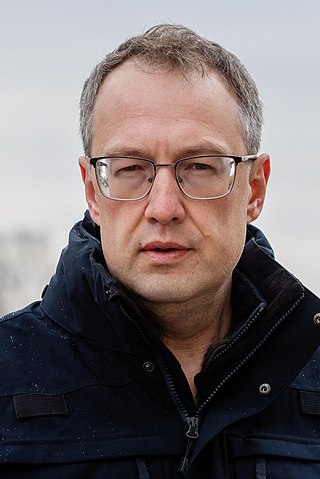 Anton Yuriyovych Gerashchenko is a current official advisor and a former deputy minister at the Ukrainian Ministry of Internal Affairs. He is a former member of the Ukrainian parliament (2014–2019) and was the subject of an assassination attempt in part because of his actions. 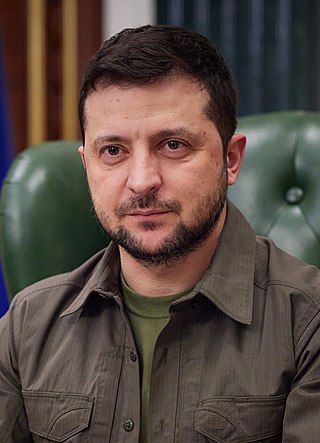 Volodymyr Oleksandrovych Zelenskyy is a Ukrainian politician and former comedian and actor who has served as the sixth and current president of Ukraine since 2019. 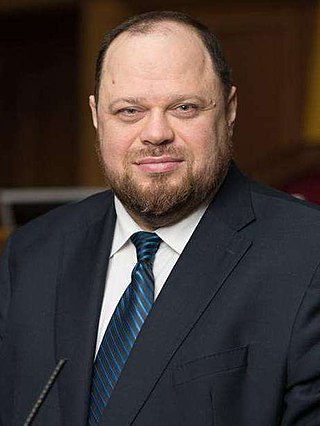 Ruslan Oleksiyovych Stefanchuk is a Ukrainian politician, lawyer and Chairman of the Verkhovna Rada.

Andrii Borysovych Yermak is a Ukrainian film producer, lawyer and the Head of the Office of the President of Ukraine. Ukrainian President Volodymyr Zelenskyy appointed him on 11 February 2020. He is also a member of the National Security and Defense Council of Ukraine.

The Shmyhal government is the current government of Ukraine, formed on 4 March 2020 and led by Denys Shmyhal, who was previously acting vice prime minister, and earlier the Governor of Ivano-Frankivsk Oblast.

Yevhen Volodymyrovych Yenin was a Ukrainian diplomat and lawyer who served as the Deputy Minister of Internal Affairs from 2021 until his death in a 2023 helicopter crash.

Patron is a detection dog and mascot for the State Emergency Service of Ukraine. He is a Jack Russell Terrier. 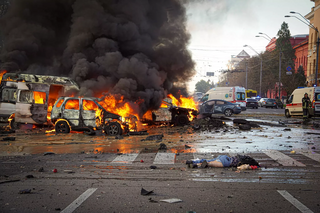 The Russian strikes against Ukrainian infrastructure are drone and missile attacks, conducted since October 2022 by Russia as part of its invasion of Ukraine. The strikes were targeted at civilian areas beyond the battlefield and critical energy infrastructure in particular, which is considered a violation of War laws.

On 18 January 2023, a Ukrainian Eurocopter EC225 Super Puma carrying ten people, including Ukrainian Minister of Internal Affairs Denys Monastyrsky, his deputy Yevhen Yenin, and State Secretary Yurii Lubkovych, crashed into a kindergarten in Brovary, a suburb of Kyiv, Ukraine. The crash killed fourteen people, including Monastyrsky, Yenin, and Lubkovych. Four of the victims were killed on the ground, including one child. Twenty-five other people were injured on the ground, including eleven children.

Yurii Olehovych Lubkovych was a Ukrainian diplomat who served as the Secretary of State of the Ministry of Internal Affairs from 2021 until his death in 2023. 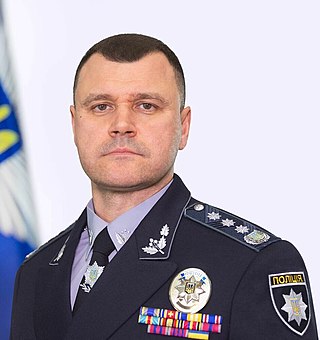 Ihor Volodymyrovych Klymenko is a Ukrainian police general serving as the acting minister of internal affairs since 18 January 2023. He succeeded Denys Monastyrsky following his death in a helicopter crash. He has been the chief of the National Police of Ukraine since 25 September 2019.