It also has responsibility for the tourism, leisure and creative industries (some joint with Department for Business, Energy and Industrial Strategy). The department was also responsible for the delivery of the 2012 Olympic Games and Paralympic Games.

DCMS originates from the Department of National Heritage (DNH), which itself was created on 11 April 1992 out of various other departments, soon after the Conservative election victory. The former ministers for the Arts and for Sport had previously been located in other departments.

DNH was renamed as the Department for Culture, Media and Sport (DCMS) on 14 July 1997, under the premiership of Tony Blair. It was renamed to Department for Digital, Culture, Media and Sport on 3 July 2017, staying DCMS under the premiership of Theresa May to reflect the department's increased activity in the digital sector. [3]

DCMS was the co-ordinating department for the successful bid by London to host the 2012 Olympics and appointed and oversees the agencies delivering the Games' infrastructure and programme, principally the Olympic Delivery Authority (ODA) and LOCOG.

The June 2007 Cabinet reshuffle led to Tessa Jowell MP taking on the role of Paymaster General and then Minister for the Cabinet Office while remaining Minister for the Olympics. Ministerial responsibility for the Olympics was shared with Ms Jowell in the Cabinet Office, but the staff of the Government Olympic Executive (GOE) remained based in DCMS.

Following the 2010 general election, ministerial responsibility for the Olympics returned to the Secretary of State. Although Jeremy Hunt's full title was Secretary of State for Culture, Olympics, Media and Sport, the department's name remained unchanged. On 4 September 2012, Hunt was appointed Health Secretary in a cabinet reshuffle and replaced by Maria Miller. Maria Miller later resigned due to controversy over her expenses. Her replacement was announced later that day as Sajid Javid.

After the 2015 general election, John Whittingdale was appointed as Secretary of State, tasked with initiating the BBC Charter review process. DCMS received full responsibility for the digital economy policy, formerly jointly held with BIS, and sponsorship of the Information Commissioner's Office from the Ministry of Justice.

Whittingdale was replaced by Karen Bradley after the referendum on the UK's membership of the EU in July 2016. The Office for Civil Society moved from the Cabinet Office to DCMS as part of the same reshuffle.

It is responsible for government policy in the following areas:

Other responsibilities of DCMS include listing of historic buildings, scheduling of ancient monuments, export licensing of cultural goods, and management of the Government Art Collection (GAC).

The Secretary of State has responsibility for the maintenance of the land and buildings making up the historic Royal Estate under the Crown Lands Act 1851. These inherited functions, which were once centralised in the Office of Works, are now delivered as follows:

The department also has responsibility for state ceremonial occasions and royal funerals. However, responsibility for the Civil List element of head-of-state expenditure and income from the separate Crown Estate remains with the Chancellor of the Exchequer.

DCMS works jointly with the Department for Business, Innovation and Skills (BIS) on design issues, including sponsorship of the Design Council, and on relations with the computer games and publishing industries.

DCMS organises the annual Remembrance Day Ceremony at the Cenotaph and has responsibility for providing humanitarian assistance in the event of a disaster. In the government's response to the 7 July 2005 London bombings the department coordinated humanitarian support to the relatives of victims and arranged the memorial events.

DCMS has also supported cyber initiatives [4] such as the UK Cyber Security Forum [5] to support innovation in the cyber industry.

The main offices are at 100 Parliament Street, occupying part of the building known as Government Offices Great George Street.

The DCMS ministers are as follows: [6]

The Permanent Secretary since the end of March 2019 is Sarah Healey. [7]

The DCMS has policy responsibility for three statutory corporations and two public broadcasting authorities. These bodies and their operation are largely independent of government policy influence.

In September 2015, DCMS gained sponsorship of one non-ministerial department:

The statutory corporations are:

The Department was responsible for the Horserace Totalisator Board (The Tote) until the sale of the Tote's business to Betfred in July 2011.

The public corporations are:

The DCMS sponsors the following executive non-departmental public bodies including a number of museums and galleries:

DCMS also has responsibility for two other bodies classified by the Office for National Statistics [8] as being within the central government sector:

DCMS is also the major financial sponsor of the following bodies, which are not classed as part of the UK central government

Sponsorship of the National Endowment for Science, Technology and the Arts (NESTA) transferred to the Department for Innovation, Universities and Skills in June 2007. The Museum of London transferred to the Greater London Authority from 1 April 2008.

DCMS formerly sponsored eight Regional Cultural Consortiums with NDPB status. In July 2008, DCMS announced that the consortiums would be phased out over a twelve-month period and replaced by a new alliance of the regional teams of Arts Council England, Sport England, English Heritage and the MLA.

Media-related policy is generally reserved to Westminster i.e. not devolved. These areas include:

The department's main counterparts in Northern Ireland are as follows: [11]

Under the Welsh devolution settlement, specific policy areas are transferred to the Welsh Government rather than reserved to Westminster.

The secretary of state for digital, culture, media and sport, also referred to as the culture secretary, is a British secretary of state position with overall responsibility for strategy and policy across the Department for Digital, Culture, Media and Sport. The office has been dubbed "Minister of Fun".

The Secretary of State for Health and Social Care, also referred to as the Health Secretary, is a senior secretary of state position within the Government of the United Kingdom, and leads the Department of Health and Social Care (DHSC). The officeholder has responsibility for all health and social care matters in England, including the National Health Service (NHS). Alongside the Chief Medical Officer for England, the officeholder serves as the principal adviser to the Prime Minister of the United Kingdom on all health matters. The office forms part of the Cabinet of the United Kingdom.

The minister of Canadian heritage is the minister of the Crown who heads Canadian Heritage, the department of the Government of Canada responsible for culture, media, sports, and the arts. 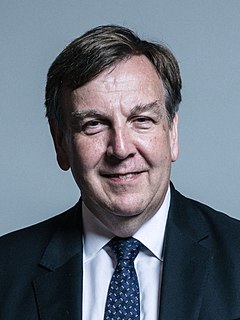 John Flasby Lawrance Whittingdale, is a British politician serving as Member of Parliament (MP) for Maldon since 1992. A member of the Conservative Party, Whittingdale has served the Minister of State for Media and Data at the Department for Digital, Culture, Media and Sport since 2020, having previously served at DCMS as Culture Secretary in the Cabinet from 2015 to 2016, until he was fired by Theresa May.

Gerard Sutcliffe is a British Labour Party politician who was Member of Parliament (MP) for Bradford South from 1994 to 2015. He was the Minister for Sport and Tourism in the Brown Government.

The Museums, Libraries and Archives Council (MLA) was until May 2012 a non-departmental public body and registered charity in England with a remit to promote improvement and innovation in the area of museums, libraries and archives. Its functions spanned the UK and it advised the government on policy and priorities for these areas in England, receiving funding from the Department for Culture, Media and Sport (DCMS). The last chairman was Sir Andrew Motion and last chief executive officer (CEO) was Roy Clare CBE.

In the Government of the United Kingdom, the Minister for the Arts is a ministerial post, usually a low to middle-ranking minister to the much senior Secretary of State, who runs the entire department and is ultimately responsible for the department's brief.

Dame Susan Jane Owen is a former British civil servant, economist and former academic. She has served as the Permanent Secretary for the Department for Digital, Culture, Media and Sport from October 2013 until her retirement in March 2019.

The Ministry of Heritage, Sport, Tourism and Culture Industries, was created on January 18, 2010 when the Ministry of Culture and the Ministry of Tourism were combined under one ministry. Sport was added to the portfolio in 2011. It is responsible for the development of policies and programs and the operation of programs related to tourism, arts, cultural industries, heritage sectors and libraries, in Ontario. The Ministry works in partnership with its agencies, attractions, boards and commissions and the private sector to maximize the economic, cultural and social contributions of its agencies and attractions, while promoting the tourism industry and preserving Ontario's culture and heritage.

Neil Francis Jeremy Mendoza, Baron Mendoza is a British publisher, philanthropist and member of the House of Lords. He has served as the provost of Oriel College, Oxford, since September 2018, as well as the UK government's Commissioner for Cultural Recovery and Renewal since May 2020.

The Cabinet Secretary for the Constitution, External Affairs and Culture is a cabinet position in the Scottish Government.

Sarah Elizabeth Healey is a British civil servant, appointed as Permanent Secretary for the Department for Digital, Culture, Media and Sport in March 2019.

The Parliamentary Under-Secretary of State for Arts, Heritage and Tourism is a junior position in the Department for Digital, Culture, Media and Sport in the British government. It is currently held by Nigel Huddleston who took the office on 13 February 2020. The position was created by the Second May ministry after the 2017 general election. The role is a successor of the Minister for Tourism and Heritage which was abolished in 2012 after the 2012 Summer Olympics in London.

The Parliamentary Under-Secretary of State for Digital Infrastructure is a junior position in the Department for Digital, Culture, Media and Sport in the British government. It is currently held by Matt Warman MP who took the office on 26 July 2019. The role was created out of the Minister of State for Digital and Culture.