Hill was born at Southampton, in Hampshire, the son of a wealthy sugar trader.

He first worked as a theatre designer in Leningrad in the 1930s, and later as an historian. In the Second World War he registered as a conscientious objector and worked on a farm.

His long association with Ireland began when he visited Glenveagh Castle, County Donegal to paint the portrait of the Irish-American art collector, Henry McIlhenny, whose grandfather had emigrated to the United States from the nearby village of Milford, and who subsequently made a fortune from his patent gas meter.

Hill began to enjoy increased success as a portrait painter from the 1960s; his subjects including many notable composers, musicians, politicians and statesmen, such as broadcaster Gay Byrne, Jerusalem mayor Teddy Kollek and the Prince of Wales. He was also an enthusiastic art collector and traveller, with a wide range of friends such as Bryan Guinness and Isaiah Berlin. Greta Garbo visited Hill in the 1970s, a visit which formed inspiration for Frank McGuinness' 2010 play Greta Garbo Came to Donegal. In 1981, he donated to the state his home, St. Columb's Rectory, near the village of Churchill, County Donegal, which he had owned since 1954, along with a considerable collection including work by Pablo Picasso, Edgar Degas, Georges Braque, Graham Sutherland, Anna Ticho and Jack Butler Yeats.

An exhibition of his work and personal art collection can be seen at the house and associated Glebe Gallery at Churchill, near Letterkenny. Another collection of his work is held at Mottisfont Abbey. Many of his landscapes portray scenes from Tory Island, where he had a painting hut for years, and started and then mentored the artists' community there, teaching the local fishermen how to paint. This led on to the informal but busy "Tory School" of artists such as James Dixon and Anton Meenan, who found that they had the time to paint and used their wild surroundings as a dramatic subject.

Hill was made a CBE in 1997. A retrospective exhibition was arranged for and by him at the Royal Hibernian Academy in 1998. In 1999, he was made an honorary Irish citizen by Irish President Mary McAleese.

He died at a London hospital on 30 July 2000, aged 83, and is buried in Hampshire in the South of England with his parents. Memorial services were held for him in Dublin at St Patrick's Cathedral, as well as St James's Church, Piccadilly, London, and his local church in Trentagh, County Donegal.

In 1987 Grey Gowrie's illustrated essay on Hill was published by Quartet. Gowrie considered his landscapes to be as good as those of Jack Yeats. [1] A fuller biography of Hill by Bruce Arnold was published in 2010. [2]

Derek Hill had a great love of Rome and was the Director of Fine Arts at the British School at Rome (BSR) for about five years during the 1950s. [3] During his lively two tenures, he encouraged resident art scholars, which included Anthony Fry and John Bratby, to travel throughout Italy, whilst, in the academy itself, Hill fostered a jovial, creative atmosphere. [4]

In 1989, shortly before Hill's death, he established a charitable trust which provides annual bursaries for the Derek Hill Foundation Scholarship residencies at the BSR. The scholarship is granted through an open, competitive selection of British and Irish artists in the fields of drawing and painting, providing a stipend and three months full-board in one of the Edwin Austin Abbey studios. [5] Winners of the award have included Emma Stibbon RA [6] and David O'Kane. [7] 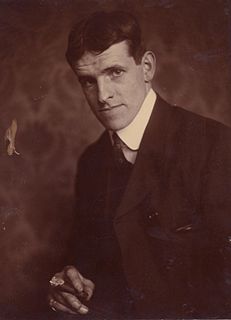 Jack Butler Yeats RHA was an Irish artist and Olympic medalist. W. B. Yeats was his brother. 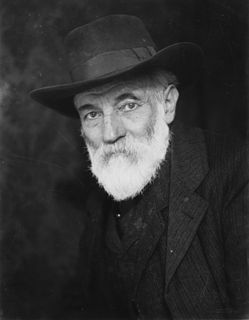 John Butler Yeats was an Irish artist and the father of William Butler Yeats, Lily Yeats, Elizabeth Corbett "Lolly" Yeats and Jack B. Yeats. The National Gallery of Ireland holds a number of his portraits in oil and works on paper, including one of his portraits of his son William, painted in 1900. His portrait of John O'Leary (1904) is considered his masterpiece.

Louis le Brocquy was an Irish painter born in Dublin to Albert and Sybil le Brocquy. His work received many accolades in a career that spanned some seventy years of creative practice. In 1956, he represented Ireland at the Venice Biennale, winning the Premio Acquisito Internationale with A Family, subsequently included in the historic exhibition Fifty Years of Modern Art Brussels, World Fair 1958. The same year he married the Irish painter Anne Madden and left London to work in the French Midi.

Sheila McClean, RUA, was an Irish painter, whose work was in the impressionist style.

The British School at Rome (BSR) is an interdisciplinary research centre supporting the arts, humanities and architecture.

John Kane was an American painter celebrated for his skill in Naïve art.

Glebe House and Glebe Gallery are located just outside the town of Letterkenny near Churchill. The English portrait and landscape painter Derek Hill lived and worked there from 1954 until he presented the house and his art collection to the Irish state in 1981. Hill's former studio has been converted into a modern gallery with changing exhibitions while his art collection is shown in his former home together with European and oriental furniture and William Morris wallpapers and fabrics. The collection includes works by Pablo Picasso, Georges Braque, Louis le Brocquy, Graham Sutherland, Auguste Renoir, Jack Butler Yeats, Oskar Kokoshka, Patrick Swift and the native Tory Island painter, James Dixon.

Ronald Ossory Dunlop was an Irish author and painter in oil of landscapes, seascapes, figure studies, portraits and still life.

Church Hill, historically known as Minalaban, is a small village located 8 miles from County Donegal's largest town of Letterkenny, Ireland. The village's name is derived from its location on a small hilltop.

Patrick Swift (1927–1983) was an Irish painter who worked in Dublin, London and the Algarve, Portugal.

Tom Hallifax is an Anglo-Irish contemporary artist who came to prominence in 1993 when his gurning self-portraits were used to publicise the National Portrait Gallery's BP Portrait Award Exhibition. Hallifax, who has lived and worked in Belfast, London, and in a remote cottage on an island off Donegal, currently resides in Dorset.

Mary Swanzy HRHA was an Irish landscape and genre artist. Noted for her eclectic style, she painted in many styles including cubism, futurism, fauvism, and orphism, she was one of Ireland's first abstract painters.

Kathleen Mabel Bridle ARUA was a British artist and teacher. She influenced Northern Irish artists such as William Scott and T.P. Flanagan.

Lilian Davidson ARHA was an Irish landscape and portrait artist, teacher and writer.

Clare Marsh was an Irish still life and portrait artist.