The Deutsche Fotothek (German pronunciation: [ˈdɔʏtʃə fotoˈteːk] ) is a picture library in Dresden, Germany, located in the Saxon State Library. It holds more than two million images. Its strengths are in art, architecture, music, geography, technology, the economy, and the Saxony region. Its collection came from institutions, companies, and individuals such as Hermann Krone.

In 2009, the library announced that it was donating approximately 250,000 image files to Wikimedia Commons under a Creative Commons BY-SA 3.0 license. [1] [2] 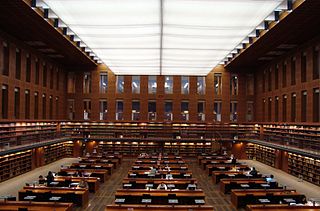 The Saxon State and University Library Dresden, abbreviated SLUB Dresden, is located in Dresden, Germany. It is both the regional library for the German State of Saxony as well as the academic library for the Dresden University of Technology. It was created in 1996 through the merger of the Saxon State Library (SLB) and the University Library Dresden (UB). The seemingly redundant name is to show that the library brings both these institutional traditions together. 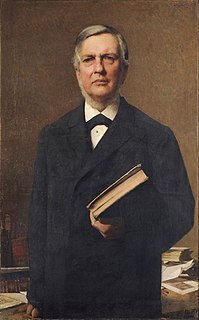 Ernst Wilhelm Förstemann was a German historian, mathematician, doctor of linguistics, librarian, and director of the Saxon State Library in Dresden. He is known as a founder of onomastics and folk etymology studies in Germany, and also for his seminal contributions made in the early years of Mayanist research, towards the decipherment and understanding of calendrical elements in the pre-Columbian Maya script.

The Hochschule für Musik Carl Maria von Weber is a college of music in Dresden, Germany. 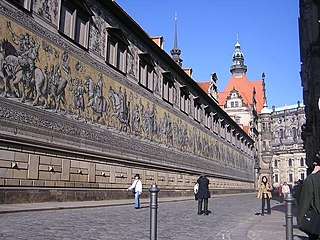 The Fürstenzug in Dresden, Germany, is a large mural of a mounted procession of the rulers of Saxony. It was originally painted between 1871 and 1876 to celebrate the 800th anniversary of the Wettin Dynasty, Saxony's ruling family. In order to make the work weatherproof, it was replaced with approximately 23,000 Meissen porcelain tiles between 1904 and 1907. With a length of 102 metres (335 ft), it is known as the largest porcelain artwork in the world. The mural displays the ancestral portraits of the 35 margraves, electors, dukes and kings of the House of Wettin between 1127 and 1904.

All Saints Church (Allerheiligenkirche) was an Anglican church on Wiener Straße in Dresden. It was in the Early English Period of Neo-Gothic architecture.

The St. Simeon of the Wonderful Mountain Church is a Russian Orthodox church in the German city of Dresden. It was designed by Harald Julius von Bosse and Karl Weißbach and built from 1872 to 1874. It is dedicated to Simeon Stylites the Younger.

The Kirnitzsch (German), in Bohemia also called the Kirnischt, Czech: Křinice, is a right tributary of the River Elbe, which passes through the Czech Republic and the German Free State of Saxony.

Pontus Carle is a contemporary artist living between Paris and Berlin. 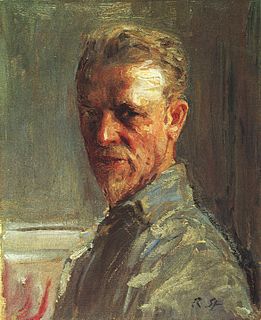 Robert Hermann Sterl was a German painter and graphic artist.

Siegfried Rudolf Geißler was a German composer, conductor, hornist and politician. He founded the Thüringen Philharmonie Suhl in 1979. After the Wende, he was a member of the New Forum who was elected to the first Landtag of Thuringia in 1990. As its senior, he was its Father of the House and opened the inaugural session.

Karl Laux was a German musicologist, music critic and rector.

Peter Ludwig Gülke is a German conductor and musicologist.

Renate Rössing was a German photographer. Her career continued beyond the changes of 1989/90. Prior to that, as an East German citizen, she enjoyed privileges which enabled her to travel abroad. She is nevertheless best known for pictures taken in and around her home cities of Leipzig and Dresden during the 1950s and 1960s. Her work embraced photojournalism, portraiture and landscapes. For historians, some of her most interesting pictures deal with daily life during the years of postwar reconstruction in the German Democratic Republic. 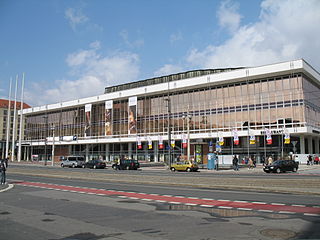 The Kulturpalast Dresden is a modernist building built by Wolfgang Hänsch during the era of the German Democratic Republic. It was the largest multi-purpose hall in Dresden when it opened in 1969, and was used for concerts, dances, conferences and other events. The building underwent several years of reconstruction beginning in 2012 and opened with a new concert hall in April 2017.

Johann Christian Joseph Seconda was a German theatre director of a travelling opera company and himself an actor.