Devayani (Sanskrit : देवयानी, romanized: Devayānī) is a character in Hindu literature. She is described to be the daughter of Shukra, the acharya (preceptor) of the asuras, and his wife Jayanti, the daughter of Indra. [2] [3] She marries King Yayati, and gives birth to two sons — Yadu and Turvasu. [4]

Kacha is described to be the handsome son of Brihaspati. He is sent by the devas to Shukra's ashrama (spiritual hermitage) to learn about the Mṛtasañjīvanī vidyā mantra, the knowledge that allows one to restore life after death. Shukra accepts him as his student, and the latter accepts the task of offering him a thousand years of service. Devayani is infatuated by the youth, and the two become an inseparable couple. The asuras, however, are suspicious of Kacha's intentions, guessing correctly that he wished to know the secret of the life-restoring mantra. They murder him on two different occasions: They kill him when he is deep within the forest and feed him to the wolves, and pound his body to paste, mixing it with seawater. On both occasions, upon the insistent pleas of his daughter, Kacha is restored to life with the knowledge of the Sañjīvanī by Shukra. In their third attempt, the asuras burn the body of Kacha, mix it with ashes and wine, offer it to Shukra to drink. When dusk falls, and Shukra observes that his disciple has not yet arrived, he deduces that the latter is in his belly. Finding himself in a dilemma, the acharya teaches Kacha the Mṛtasañjīvanī mantra, and when the disciple bursts out of Shukra's belly, killing him, he revives his acharya by chanting the mantra. His objective achieved, he stays under the tutelage of Shukra until his education is completed. [5]

His tutelage complete, Kacha takes his leave from Devayani and her father, and starts to journey back to Devaloka. Devayani follows him for a long distance, and requests that he marry her. Kacha reveals to her that Shukra had told him that since he had emerged from the acharya's belly, he is deemed to be his son, and that made Devayani his sister. Furious at his rejection, Devayani curses him that he would be unable to employ the art of the life-reviving mantra himself. Kacha, in turn, curses her that none of the sons of sages would marry her. After the incident, they parted ways, and never met again. [6]

When Shukra serves as the counsellor of the daitya king Vrishaparvan, Devayani becomes a friend of Sharmishtha, a princess, and the daughter of the daitya king. One day, the two go for a bath in a forest brook, accompanied by their retinue of maids, leaving their clothes on the bank of the stream. While they bathe, Indra manifests himself as a wind, blowing their garments off the banks. In their hurry to retrieve their clothes, the two women don each other's saris. A quarrel ensues between the friends, and insults are exchanged regarding each other's fathers. In the ensuing quarrel, Sharmishtha and her maids throw Devayani into a well, leaving her for dead. Devayani is rescued by Yayati, a king of the Chandravamsha dynasty, who enquires regarding her identity, and returns to his kingdom. [7]

Devayani sends Ghurnika, her maid, to her father, conveying the news of her quarrel and dire circumstances. Shukra is furious with Vrishaparvan, and settles down in the forest with his daughter. When the daitya king begs for the acharya's forgiveness in person, Shukra demands that one thousand servants, along with Sharmishtha, are required to serve Devayani as an apology. Fearing the sage's wrath, the king concedes, and sends his daughter and one thousand women to serve Devayani in the forest. [8]

After a period of time, Devayani returns to the same forest, along with Sharmishtha and her other servants. Yayati comes to the spot for hunting, and they meet again. The king and the Brahmana's daughter fall in love, and so the former asks for Devayani's hand from Shukra, as was custom. Shukra offers his consent readily, but warns Yayati that he is not to have nuptial relations with Sharmishtha. Yayati marries Devayani, and looks after her well in his palace. [9]

Yayati sires two sons, Yadu and Turvasu, with Devyani. Unbeknownst to her, he secretly engages in an affair with Sharmishta as well, and has three sons by her: Druhyu, Anudruhyu, and Puru. When Devayani learns of her husband's infidelity, she leaves him, and returns to her father's place. Shukra curses his son-in-law with premature old age. However, upon hearing Yayati's pleas, he agrees to alter it so that Yayati could swap his old age with the youth of any of his young sons. Yayati swaps his youth with his fifth son, Puru. [10] After a thousand years of enjoying his sensuous youth with his two wives, he receives the curse back from his son, and retires to the forest with Devayani and Sharmishtha. [11]

Jamadagni is a character in Hindu literature. He is regarded in Hindu tradition to be one of the Saptarishi in the seventh, and the current age of Manvantara.

Itihasa refers to the collection of written descriptions of important events in Hinduism. It includes the Mahabharata, the Puranas and the Ramayana. The Mahabharata includes the story of the Kurukshetra War and preserves the traditions of the Lunar dynasty in the form of embedded tales. The Puranas narrate universal history – the books discuss in depth the topics of cosmogony, myth, legend and history. The Ramayana contains the story of Rama and is incidentally related to the legends of the Solar dynasty. A story is considered to be itihasa only when the author of the story has himself witnessed or is part of the story. Vyasa, who wrote the Mahabharata, is himself a character in the story. Similarly, Valmiki, who wrote the Ramayana, was also a character in the story. Many classical Indian poets derive the plots of their poetry and drama from the Itihasa. The tradition of itihāsa is generally understood to be developed by the bardic tradition of Sūtas and Cāraṇas whose duties consisted of composing royal eulogies.

In Hindu scriptures, Durvasa also known as Durvasas, is a legendary rishi (sage). He is the son of Anasuya and Atri. According to some Puranas, Durvasa is a partial avatar of Shiva, known for his short temper. Wherever he goes, he is received with great reverence by humans and devas alike.

Jalandhara, also known as Chalantarana is an asura in Hindu mythology. He was born when Shiva opened his third eye in his fury when Indra struck him with his thunderbolt. However, Indra was saved, and the energy emitted from the eye was sent into the ocean. The energy developed into a boy and was raised by Varuna and later, Shukracharya. When he grew up, he conquered the three realms - Svarga (heaven), Bhuloka (earth), and Patala. He married Vrinda, the daughter of Kalanemi. He would be slain by his creator, Shiva.

Kacha was an ancient sage and son of Brihaspati and Tara in Hindu mythology. The narrative of Kacha is mentioned in the Mahābhārata, the Matsya Purana and the Agni Purana. He was known for learning Mrityu Sanjivini Mantra from his guru Shukracharya. However, he failed to bring many dead Devas back to life due to earning the wrath and curse of Shukracharya daughter Devayani.

Yayāti, is a king in Hindu tradition. He is described to be a Chandravamsha king. He is regarded to be the progenitor of the races of the Yadavas and the Pandavas.

Hindu mythological wars are the wars described in the Hindu texts of ancient India. These wars depicted both mortals of great prowess as well as deities and supernatural beings, often wielding supernatural weapons of great power. Hindu teachings prescribe war as the final option, to be employed only after all peaceful methods are exhausted. Participation in righteous war, or dharmayuddha, was said to be honourable and was a principal duty of the Kshatriya or the warrior varna, and victory in such wars was regarded as a matter of honour.

Tilottama, is an apsara described in Hindu mythology.

Dadhichi, also rendered Dadhyanga and Dadhyancha, is a sage in Hinduism. He is best known for his sacrifice in the Puranas, where he gives up his life so that his bones could be used to manufacture the Vajra, the diamond-like celestial thunderbolt of the deity Indra, in order to slay Vritra.

In Hindu mythology, the danavas are a race descending from Kashyapa and his wife Danu, a daughter of the progenitor god, Daksha. It is mentioned that there are one hundred danavas.

Sharmishtha is a princess in Hindu mythology. She is described to be the daughter of the daitya king Vrishaparvan. She becomes the second wife of Yayati, due to which she becomes an ancestor of the Pandavas and the Kauravas.

The Adi Parva or The Book of the Beginning is the first of eighteen books of the Mahabharata. "Adi" is a Sanskrit word that means "first".

Prahlada is an asura king in Hindu mythology. He is known for his staunch devotion towards the preserver deity, Vishnu. He appears in the narrative of Narasimha, the man-lion avatar of Vishnu, who rescues Prahlada by slaying his wicked father, Hiranyakashipu.

King Puru was a Puranic king and the youngest son of king Yayati and Sharmishtha and one of ancestors of the Pandavas and Kauravas. King Puru married Kausalya and Janmajeya I is his son. 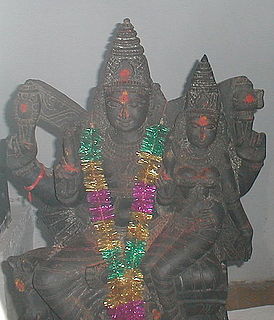 Jayanti is a character in Hindu mythology. She is the daughter of Indra, the king of the devas and the ruler of Svarga, and his consort, Shachi.

Kacha Devayani is a 1941 Indian Tamil language film produced and directed by K. Subramanyam. The film is based on a love story from Mahabharatha's Aadi parva and in Matsyapuranam and featured Kothamangalam Seenu and T. R. Rajakumari in the lead roles.

In Hindu texts, the Puru and Yadu Dynasties are the descendants of legendary King Pururavas who was a famous Hindu ruler in the Treta Yuga. Pururavas was the son of Ila and Budha. Some of the dynasties' important members were Yayati, Yadu, King Puru, Turvasu, Druhyu and Anu. According to Hindu religious books, Yayāti was one of the ancestors of Pandavas and Yaduvanshis.

The Turvasu, Druhyu and Anu dynasties are legendary Indian dynasties recorded in ancient Sanskrit literature, especially the epics Ramayana and Mahabharata. They would have ruled in the early first millennium BCE, according to most modern historians, but in the late third millennium BCE according to traditional Hindu dating.

Yayati is a 1959 Marathi-language mythological novel by Indian writer V. S. Khandekar. One of Khandekar's best-known works, it retells the story of the mythical Hindu king, Yayati, from the Hindu epic the Mahabharata. The novel has multiple narrators, and poses several questions on the nature of morality. Scholars have analysed its hero, Yayati, as a representation of modern man. Accepted as classic of Marathi literature, Yayati has won several awards, including the Sahitya Akademi Award in 1960 and the Jnanapith Award in 1974.