Diário da República (DR) is the official gazette of Portugal. Between 1869 and 1976, it was called Diário do Governo.

As in many countries, legislative texts are only binding after publication (article 119 of the Portuguese Constitution).

Since July 1, 2006, the gazette is published in electronic form, with only a handful of authenticated printed copies (for deposit in the National Archive, the Presidency, the Assembleia da República, the high courts, etc.). There were other changes, such as the end of the III Series. It is possible to buy the printed version of the I Series.

Diário da República Electrónico is the public service of universal and free access. It requires a PDF viewer. Users can search and access entire editions or a particular act, from 1910, in the case of the I Series, or 2000, in the case of the II Series. There are no known plans to backscan older copies.

Other official newspapers in Portugal

Public holidays celebrated in Portugal are a mix of religious, town, city, national holidays and holidays of the Autonomous regions of Portugal.

The Boletín Oficial del Estado (BOE) is the official gazette of the Kingdom of Spain and is published every day except Sunday. 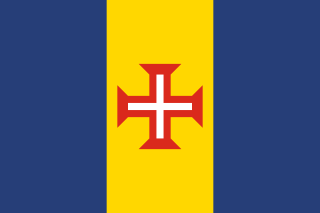 The Hino da Região Autónoma da Madeira is the official anthem of Madeira, in Portugal. It was adopted in 1980. The lyrics are by Ornelas Teixeira and the music by João Víctor Costa.

Azores Day is a regional holiday established to commemorate the Azorean political autonomy established in the Portuguese constitution, following the Carnation Revolution. The date corresponds to the festival of the Holy Spirit, a celebration based in the archipelago's religious and cultural history, held on the Sunday of Pentecosts, a movable public holiday observed only in the archipelago of the Azores.

The Azores Regional Election (1976) was an election held on 27 June 1976 for the first Legislative Assembly of the Portuguese Autonomous Region of the Azores.

Diario Oficial, a common Spanish and Portuguese designation for a government gazette, may refer to:

The Azores Regional Election (2008) was an election held on 10 October 2008 for the legislative assembly and government of the Portuguese autonomous region of the Azores. in which the Socialist party, under the leadership of Carlos César won a third mandate with 46.7% of the turnout, while their rivals, under the Social Democratic Party leader Carlos Costa Neves, received 30.27% of the vote: the result would result Neves' resignation in the following days.

Comunidade Intermunicipal do Oeste is an administrative division of Portugal, located on the country's western central coast. The population in 2011 was 362,540, in an area of 2,220.16 km². Caldas da Rainha serves as the seat of OesteCIM.

The Diário Oficial da União, abbreviated DOU, is the official journal of the federal government of Brazil. It is published since 1 October 1862 and was created via the imperial decree 1.177, of September 9 of the same year. It is published by the Brazilian National Press.

The Official Journal of the Republic of Chile is Chile's government gazette – a means of publication of laws, decrees, and other legal regulations issued by state bodies.

Regional elections were held on 22 September 2019 to determine the composition of the Legislative Assembly of the Autonomous Region of Madeira in Portugal. All 47 members of the Assembly were up for election.

The following is a timeline of the history of the city of Funchal, Madeira, Portugal.

The International Business Center of Madeira, formally known as the Madeira Free Trade Zone, is a set of tax benefits authorised by Decree-Law 500/80 in 1980, legislated in 1986, and amended throughout the years by the Portuguese government to favor the Autonomous Region of Madeira. Its objectives are to attract foreign investment to the region and internationalise Portuguese companies.

The Medal of Merit of the Autonomous Region of Madeira is the highest honour given by the autonomous region. The medal is awarded by the Legislative Assembly of Madeira to 'natural or legal entities, public or private, national or foreign, living or posthumously, who have rendered outstanding services to the Region or who, for any other reason, the Region understands that must be distinguish ”.

The Autonomic Insignia of Valour is the second highest honor awarded by the Regional Government of Madeira, which “aims to distinguish, in life or posthumously, citizens, communities or institutions that stand out for personal or institutional merits, acts, acts services rendered to the Region ”.

The Autonomic Insignia of Distinction is the third highest honor awarded by the Regional Government of Madeira, which “aims to distinguish, in life or posthumously, citizens, communities or institutions that stand out for personal or institutional merits, acts, acts services rendered to the Region ”.

The Azorean Autonomic Insignia are regional honours, created by Regional Legislative Decree n. 36/2002/A, of 28 November and regulated by Regional Legislative Decree n. 10/2006/A, of 20 March, which aims to distinguish, in life or posthumously, citizens or legal persons who stand out for personal or institutional merits, acts, civic deeds or services rendered to the Azorean people. The attribution of the Azorean Autonomic Insignia is made through parliamentary decision and they are usually awarded on the Region's Day, in a solemn session co-chaired by the Presidents of the Legislative Assembly and the Regional Government of the Azores.