The park lies in the Diablo Foothills of the northern Diablo Range, west of Mount Diablo and Mount Diablo State Park. The closest city is Walnut Creek. 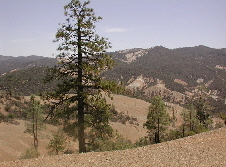 The Diablo Range is a mountain range in the California Coast Ranges subdivision of the Pacific Coast Ranges. It is located in the eastern San Francisco Bay area south to the Salinas Valley area of northern California, the United States.

Mount Diablo is a mountain of the Diablo Range, in Contra Costa County of the eastern San Francisco Bay Area in Northern California. It is south of Clayton and northeast of Danville.

Walnut Creek is a city in Contra Costa County, California, United States, located in the East Bay region of the San Francisco Bay Area, about 16 miles east of the city of Oakland. With a total estimated population of 69,122, Walnut Creek serves as a hub for its neighboring cities because of its location at the junction of the highways from Sacramento and San Jose (I-680) and San Francisco/Oakland (SR-24) and its accessibility by BART. Its active downtown neighborhood features hundred-year-old buildings and extensive high-end retail establishments, restaurants and entertainment venues.

Diablo Foothills Regional Park is bordered by: Castle Rock Regional Recreation Area on the east, and Shell Ridge Open Space to the north. Together, these three parks provide 18,000 acres (73 km2) of parkland for visitors to enjoy.

Ed R. Levin County Park is the largest park in Milpitas, California. It is run by the Santa Clara County Parks and Recreation Department and is located in the chaparral foothills of Diablo Range east of the Santa Clara Valley. Monument Peak can be accessed through trails in the park. The park's recreational facilities include a hang gliding and paragliding area, a dog park, and horseback riding areas. Ed R. Levin County Park has two lakes, Sandy Wool Lake and Spring Valley Pond. Both of them are reservoirs which collect runoff water from the hills to the east. It is home to some of the East Bay Walls.

The San Ramon Valley is a valley and region in Contra Costa County in the East Bay region of the San Francisco Bay Area in northern California. 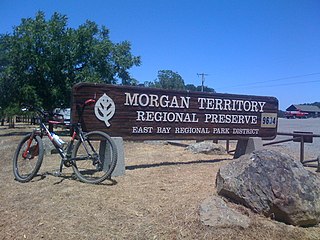 Castle Rock Regional Recreation Area is a 18,000 acres (73 km2) regional park of the East Bay Regional Park District. It is located in Contra Costa County, in the East Bay region of northern California. 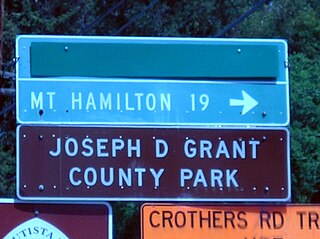 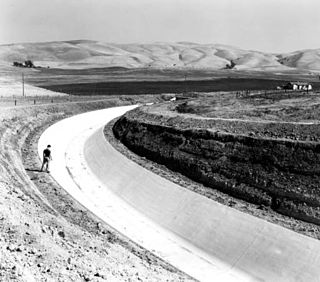 Point of Timber is a former settlement in Contra Costa County, California. It was located on Indian Slough 2 miles (3.2 km) north of Byron, and about 2.5 miles east of Union Cemetery in Brentwood. It was originally named Point of Timber Landing. The landing was built by Josiah Wills, who organized the deepening of Indian Slough, connecting the landing to the Old River. Point of Timber got its name from the mile wide strip of open Oak woodland that ran from just east of the house of John Marsh along the course of Arroyo del Sur to the edge of the marshes bordering Indian Slough and Old River.

Rancho Monte del Diablo was a 17,921-acre (72.52 km2) Mexican land grant in present-day Contra Costa County, California given in 1834 by Governor José Figueroa to Salvio Pacheco. The name "Monte del Diablo" means "thicket of the devil" in Spanish. The name was later incorrectly translated as Mount Diablo. The grant covered the area from the Walnut Creek channel east to the hills, and generally from the Mount Diablo foothills north along Lime Ridge to Avon on the Carquinez Strait of the Sacramento River, and included present day Concord and parts of Pleasant Hill. Pacheco and Clayton are outside of the Rancho Monte del Diablo grant.