Last updated April 18, 2022
Splitting of a whole into exactly two non-overlapping parts; dyadic relations and processes
This article is about dichotomy in logic and related topics. For usage of "dichotomous" in botany, see Glossary of botanical terms § dichotomous. For the album by Becoming the Archetype, see Dichotomy (album).

A dichotomy /daɪˈkɒtəmi/ is a partition of a whole (or a set) into two parts (subsets). In other words, this couple of parts must be

Such a partition is also frequently called a bipartition.

The two parts thus formed are complements. In logic, the partitions are opposites if there exists a proposition such that it holds over one and not the other.

The term dichotomy is from the Greek language Greek : διχοτομίαdichotomía "dividing in two" from δίχα dícha "in two, asunder" and τομή tomḗ "a cutting, incision". 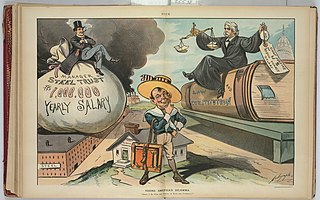 A false dilemma, also referred to as false dichotomy, is an informal fallacy based on a premise that erroneously limits what options are available. The source of the fallacy lies not in an invalid form of inference but in a false premise. This premise has the form of a disjunctive claim: it asserts that one among a number of alternatives must be true. This disjunction is problematic because it oversimplifies the choice by excluding viable alternatives. For example, a false dilemma is committed when it is claimed that, "Stacey spoke out against capitalism; therefore, she must be a communist". One of the options excluded is that Stacey may be neither communist nor capitalist. False dilemmas often have the form of treating two contraries, which may both be false, as contradictories, of which one is necessarily true. Various inferential schemes are associated with false dilemmas, for example, the constructive dilemma, the destructive dilemma or the disjunctive syllogism. False dilemmas are usually discussed in terms of deductive arguments. But they can also occur as defeasible arguments. Our liability to commit false dilemmas may be due to the tendency to simplify reality by ordering it through either-or-statements, which is to some extent already built into our language. This may also be connected to the tendency to insist on clear distinction while denying the vagueness of many common expressions.

In traditional logic, a contradiction occurs when a proposition conflicts either with itself or established fact. It is often used as a tool to detect disingenuous beliefs and bias. Illustrating a general tendency in applied logic, Aristotle's law of noncontradiction states that "It is impossible that the same thing can at the same time both belong and not belong to the same object and in the same respect."

In logic and probability theory, two events are mutually exclusive or disjoint if they cannot both occur at the same time. A clear example is the set of outcomes of a single coin toss, which can result in either heads or tails, but not both.

Level of measurement or scale of measure is a classification that describes the nature of information within the values assigned to variables. Psychologist Stanley Smith Stevens developed the best-known classification with four levels, or scales, of measurement: nominal, ordinal, interval, and ratio. This framework of distinguishing levels of measurement originated in psychology and is widely criticized by scholars in other disciplines. Other classifications include those by Mosteller and Tukey, and by Chrisman.

In the analysis of multivariate observations designed to assess subjects with respect to an attribute, a Guttman scale is a single (unidimensional) ordinal scale for the assessment of the attribute, from which the original observations may be reproduced. The discovery of a Guttman scale in data depends on their multivariate distribution's conforming to a particular structure. Hence, a Guttman scale is a hypothesis about the structure of the data, formulated with respect to a specified attribute and a specified population and cannot be constructed for any given set of observations. Contrary to a widespread belief, a Guttman scale is not limited to dichotomous variables and does not necessarily determine an order among the variables. But if variables are all dichotomous, the variables are indeed ordered by their sensitivity in recording the assessed attribute, as illustrated by Example 1.

Chris Matthew Sciabarra is an American political theorist based in Brooklyn, New York. He is the author of three scholarly books—Marx, Hayek, and Utopia; Ayn Rand: The Russian Radical; and Total Freedom: Toward a Dialectical Libertarianism—as well as several shorter works. He is also the co-editor, with Mimi Reisel Gladstein, of Feminist Interpretations of Ayn Rand and co-editor with Roger E. Bissell and Edward W. Younkins of The Dialectics of Liberty: Exploring the Context of Human Freedom. His work has focused on topics including Objectivism, libertarianism, and dialectics.

In quantum mechanics, the Kochen–Specker (KS) theorem, also known as the Bell–Kochen–Specker theorem, is a "no-go" theorem proved by John S. Bell in 1966 and by Simon B. Kochen and Ernst Specker in 1967. It places certain constraints on the permissible types of hidden-variable theories, which try to explain the predictions of quantum mechanics in a context-independent way. The version of the theorem proved by Kochen and Specker also gave an explicit example for this constraint in terms of a finite number of state vectors.

Relational dialectics is an interpersonal communication theory about close personal ties and relationships that highlights the tensions, struggles and interplay between contrary tendencies. The theory, proposed respectively by Leslie Baxter and Barbara Montgomery in 1988, defines communication patterns between relationship partners as the result of endemic dialectical tensions. Dialectics are described as the tensions an individual feels when experiencing paradoxical desires that we need and/ or want. The theory contains four assumptions, one of them being that relationships are not one dimensional, rather, they consist of highs and lows, without moving in only one direction. The second assumption claims that change is a key element in relational life, in other words, as our lives change, our relationships change with it. Third, is the assumption that, “contradictions or tensions between opposites never go away and never cease to provide tension,” which means, we will always experience the feelings of pressure that come with our contradictory desires. The fourth assumption is that communication is essential when it comes to working through these opposing feelings. Relationships are made in dialogue and they can be complicated and dialogue with similarities and differences are necessary. Relational communication theories allow for opposing views or forces to come together in a reasonable way. When making decisions, desires and viewpoints that often contradict one another are mentioned and lead to dialectical tensions. Leslie A. Baxter and Barbara M. Montgomery exemplify these contradictory statements that arise from individuals experience dialectal tensions using common proverbs such as "opposites attract", but "birds of a feather flock together"; as well as, "two's company; three's a crowd" but "the more the merrier". This does not mean these opposing tensions are fundamentally troublesome for the relationship; on the contrary, they simply bring forward a discussion of the connection between two parties.

Facet theory is a metatheory for the multivariate behavioral sciences that posits that scientific theories and measurements can be advanced by discovering relationships between conceptual classifications of research variables and empirical partitions of data-representation spaces. For this purpose, facet theory proposes procedures for (1) Constructing or selecting variables for observation, using the mapping sentence technique, and (2) Analyzing multivariate data, using data representation spaces, notably those depicting similarity measures, or partially ordered sets, derived from the data.

Item tree analysis (ITA) is a data analytical method which allows constructing a hierarchical structure on the items of a questionnaire or test from observed response patterns.
Assume that we have a questionnaire with m items and that subjects can answer positive (1) or negative (0) to each of these items, i.e. the items are dichotomous. If n subjects answer the items this results in a binary data matrix D with m columns and n rows. Typical examples of this data format are test items which can be solved (1) or failed (0) by subjects. Other typical examples are questionnaires where the items are statements to which subjects can agree (1) or disagree (0).
Depending on the content of the items it is possible that the response of a subject to an item j determines her or his responses to other items. It is, for example, possible that each subject who agrees to item j will also agree to item i. In this case we say that item j implies item i. The goal of an ITA is to uncover such deterministic implications from the data set D.

Ayn Rand: The Russian Radical is a 1995 book by Chris Matthew Sciabarra tracing the intellectual roots of 20th-century Russian-American novelist and philosopher Ayn Rand and the philosophy she developed, Objectivism.

In science and research, an attribute is a quality of an object. Attributes are closely related to variables. A variable is a logical set of attributes. Variables can "vary" – for example, be high or low. How high, or how low, is determined by the value of the attribute. (For example see: Binary option)

Anton K. Formann was an Austrian research psychologist, statistician, and psychometrician. He is renowned for his contributions to item response theory, latent class analysis, the measurement of change, mixture models, categorical data analysis, and quantitative methods for research synthesis (meta-analysis).