According to his traceable fight record Corbett remained undefeated between 1926 (the year of his pro debut) and 1927. His first defeat was at the hands of future British flyweight champion, Bert Kirby. Dick fought and beat Willie Smith while defending the Empire bantamweight title. Dick fought and beat Johnny King for the vacant British bantamweight title and the Commonwealth (British Empire) bantamweight title, and would fight Johnny King a further four times. In their second bout Corbett lost his British and Commonwealth bantamweight titles to King, but he regained both titles in their third meeting. Their fourth and fifth fights were both draws and so left Corbett the title holder. Corbett also won the British (Southern Area) Featherweight Title by defeating Dave Crowley.

Coleman was one of 173 who died during the Bethnal Green Disaster during World War II. [1] He was a younger brother of the British featherweight champion Harry Corbett.

William Alexander Smith was a South African bantamweight professional boxer who competed in the 1920s. He was reigning world champion between 1924 and 1928 after winning the gold medal in the 1924 Summer Olympics in the bantamweight category. His family was from Aberdeen, Scotland and Bedfordshire, England.

Ronnie Clayton was a British boxer, born in Blackpool, Lancashire whose career highlight was winning the British Empire and European featherweight titles in 1947.

Jackie Paterson was a Scottish boxer who was world flyweight boxing champion. He was also British champion at flyweight and bantamweight.

Vincent Feeney, is a retired Irish professional boxer, nicknamed "the Sligo Kid", hailing from the Maugheraboy area of Sligo Town. For the majority of his professional career, Feeney fought in the bantamweight division but also competed at divisions either side. 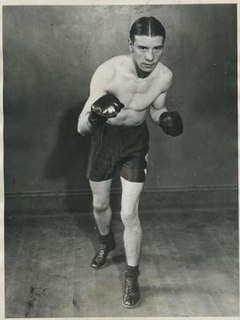 Nelson "Nel" Tarleton was an English featherweight boxer from Liverpool, England. He was British featherweight champion on three separate occasions and was one of only seven fighters to win two or more Lonsdale Belts outright.

The Prizefighter series was a professional boxing tournament created by boxing promoter Barry Hearn and aired on Sky Sports. The format has an initial eight fighters, who compete in four quarter-finals of 3 x 3 minute rounds followed by two semi-finals and one final all on the same night. The total prize money of the tournament is £80,000 with the winner of the tournament taking home £32,000, a figure that has increased from the initial top prize of £25,000 when the tournament first aired in April 2008. There have been 34 Prizefighter tournaments so far featuring 14 different weight divisions. The last tournament was held in 2015.

Philip Hickman, who fought under the name Johnny Brown, was an English Jewish bantamweight boxer of the 1920s, though he fought some as a feather and lightweight. Born in Spitalfields, London he won the National Sporting Club (NSC) British bantamweight title, British Empire bantamweight title, and European Boxing Union (EBU) bantamweight title. His professional fighting weight varied from 116 lb, i.e. flyweight to 128 lb, i.e. featherweight., though the majority of his important fights were fought as a bantam. 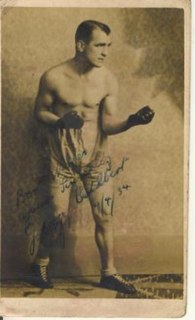 Alfred Edward "Alf" Pattenden, also known as Kid Pattenden, was a British boxer who was British bantamweight champion between 1928 and 1929.