As a halfback, kicker and quarterback, he ended his career third all time in Princeton history with over 4,000 yards of offense and 55 touchdowns.

Kazmaier was named an All-American and won the Maxwell Award and the Heisman Trophy in 1951 after his senior season. (John McGillicuddy was Kazmaier's fellow football player and roommate at Princeton.) Kazmaier was named Ivy League Football Player of the Decade in 1960 and Time Magazine ran his picture on its cover. [3] He was the last Heisman Trophy winner to play for an Ivy League institution. [4] Kazmaier graduated from Princeton in 1952 after completing a senior thesis titled "The Company and the Union: A Case Study." [5] The Chicago Bears selected him in the 1952 NFL Draft, but he declined to play pro football, instead going to Harvard Business School. After spending three years in the Navy (1955–1957) and attaining the rank of lieutenant, he founded Kazmaier Associated Inc, an investment firm in Concord, Massachusetts. [6]

In 2007, during a Maumee football game against Perrysburg, Kazmaier was honored by having his jersey number (#42) retired. [8] He also donated his Heisman Trophy to Maumee High School, where it is displayed inside a glass case in the main hallway. [9] The stadium at Maumee High School is named in his honor. His daughter, the late Patty Kazmaier-Sandt, was an All-Ivy member of the Princeton women's ice hockey team who died in 1990 at the age of 28 from a rare blood disease. The Patty Kazmaier Award, which was established by Kazmaier to memorialize his daughter, is given to the top woman college ice hockey player in the United States at the annual Women's Frozen Four NCAA championship. [10] The Heisman Memorial Trophy is awarded annually to the most outstanding player in college football. Winners epitomize great ability combined with diligence, perseverance, and hard work. It is presented by the Heisman Trophy Trust in early December before the postseason bowl games.

Ed Marinaro is an American actor and former NFL player. In 1971, he finished as a runner-up to Pat Sullivan for the Heisman Trophy, and from 2010 to 2011 starred in the football comedy series, Blue Mountain State. He is also known as a regular cast member on Hill Street Blues, playing Officer Joe Coffey for five seasons (1981–1986). 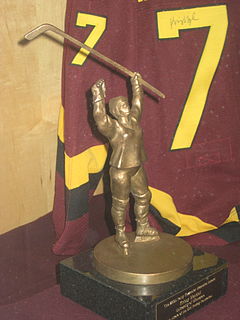 The Patty Kazmaier Memorial Award is given to the top female college ice hockey player in the United States. The award is presented during the women's annual ice hockey championship, the Frozen Four. The award was first presented in 1998. 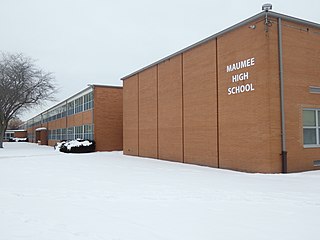 Maumee High School is a public high school in Maumee, Ohio, southwest of Toledo. It is the only high school in the Maumee City School District. Their mascot and sports teams are known as the "Maumee Panthers". They are members of the Northern Lakes League and their rivals are Perrysburg Yellow Jackets and Anthony Wayne Generals. The Maumee High School swim team that takes place on the third floor, had a win streak from the years 2007-2011.

Kazmaier is a surname. Notable people with the name Kazmaier include:

The Nils V. "Swede" Nelson Award is an American college football award given annually by the Gridiron Club of Greater Boston to "the player who by his conduct on and off the gridiron demonstrates a high esteem for the football code and exemplifies sportsmanship to an outstanding degree" among northeastern colleges and universities. In 1982, the award was narrowed to the player deemed to be the "very best, and most academically talented, college football player in New England." Since 1989, the award has been given annually to two players, one from a Division I football program, and one from a small college.

GeorgeHenry"Bulger"LoweJr. was an American footballer who played tackle and defensive end. He played five seasons for the Canton Bulldogs, Cleveland Indians, Providence Steam Roller, and Frankford Yellow Jackets of the National Football League and the Boston Bulldogs of the first American Football League.

The Princeton Tigers men's lacrosse team represents Princeton University in NCAA Division I men's lacrosse play. Princeton currently competes as a member of the Ivy League and plays its home games at the Class of 1952 Stadium in Princeton, New Jersey.

The 1951 Princeton Tigers football team represented Princeton University in the 1951 college football season. The team was considered the best in the East, winning the Lambert-Meadowlands Trophy, and was ranked sixth nationally. Dick Kazmaier won the Heisman Trophy and was the nation's total offense leader in his senior year as well as the most accurate passer in the country.

Patty Kazmaier-Sandt was a four-year varsity letter-winner for the Princeton University women's ice hockey team from 1981 through 1986. The Patty Kazmaier Award is named in her honor.

The Dartmouth Big Green women's ice hockey program represents Dartmouth College. In 2001, Dartmouth participated in the inaugural NCAA Championship tournament. Since then, they have appeared in the "Frozen Four", the semifinals of the NCAA hockey tournament, three additional times.

The Princeton Tigers women's ice hockey team represents Princeton University in the ECAC Division I women's ice hockey conference. They play at the Hobey Baker Memorial Rink. In the 2019-2020 season, they won their first ECAC championship, defeating #1 ranked Cornell by a score of 3-2 in overtime.

Katey Stone is one of the most successful coaches in the history of Division I women’s ice hockey. Stone has accumulated 494 victories and has coached 25 seasons as a head coach with the Harvard Crimson. Stone was the third coach in women’s college hockey history to win 300 games.

Daryl Watts is a Canadian women's ice hockey player. On March 17, 2018, Watts, a member of the Boston College Eagles, was awarded the 21st Patty Kazmaier Award, becoming the first freshman player to win the honor. Watts finished the season with 82 points, which led all competitors in NCAA women's ice hockey.