Dickinson Woodruff Richards, Jr. (October 30, 1895 – February 23, 1973) was an American physician and physiologist. He was a co-recipient of the Nobel Prize in Physiology or Medicine in 1956 with André Cournand and Werner Forssmann for the development of cardiac catheterization and the characterisation of a number of cardiac diseases.

Richards was born in Orange, New Jersey. He was educated at the Hotchkiss School in Connecticut, and entered Yale University in 1913. At Yale he studied English and Greek, graduating in 1917 as a member of the senior society Scroll and Key.

He joined the United States Army in 1917, and became an artillery instructor. He served from 1918 to 1919 as an artillery officer in France.

When[ when? ] he returned to the United States, Richards attended Columbia University College of Physicians and Surgeons, graduating with an M.A. in 1922 and his M.D. degree in 1923. He was on the staff of the Presbyterian Hospital in New York until 1927, when[ when? ] he went to England to work at the National Institute for Medical Research in London, under Sir Henry Dale, on the control of circulation in the liver.

In 1928, Richards returned to the Presbyterian Hospital and began his research on pulmonary and circulatory physiology, working under Professor Lawrence Henderson of Harvard. He began collaborations with André Cournand at Bellevue Hospital, New York, working on pulmonary function. Initially their research focussed on methods to study pulmonary function in patients with pulmonary disease.

Their next area of research was the development of a technique for catheterization of the heart. Using this technique they were able to study and characterise traumatic shock, the physiology of heart failure. They measured the effects of cardiac drugs and described various forms of dysfunction in chronic cardiac diseases and pulmonary diseases and their treatment, and developed techniques for the diagnosis of congenital heart diseases. For this work, Richards, Cournand, and Werner Forssmann were awarded the Nobel Prize for Physiology or Medicine for 1956.[ citation needed ]

In 1945 Richards moved his lab to Bellevue Hospital, New York. In 1947 he was made the Lambert Professor of Medicine at Columbia University, where he had taught since 1925. During his career he also served as an advisor to Merck Sharp and Dohme Company, and edited the Merck Manual. Richards retired from his positions at Bellevue and Columbia in 1961.

Richards received many other honors, including the John Phillips Memorial Award of the American College of Physicians in 1960, the Chevalier de la Legion d'Honneur in 1963, the Trudeau Medal in 1968, and the Kober Medal of the Association of American Physicians in 1970.

He died in Lakeville, Connecticut. 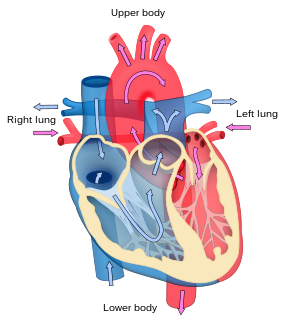 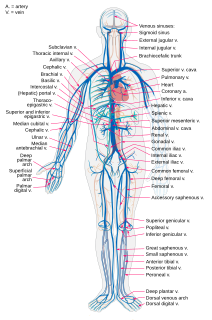 The circulatory system, also called the cardiovascular system or the vascular system, is an organ system that permits blood to circulate and transport nutrients, oxygen, carbon dioxide, hormones, and blood cells to and from the cells in the body to provide nourishment and help in fighting diseases, stabilize temperature and pH, and maintain homeostasis.

Werner Theodor Otto Forßmann was a physician from Germany who shared the 1956 Nobel Prize in Medicine for developing a procedure that allowed cardiac catheterization. In 1929, he put himself under local anesthesia and inserted a catheter into a vein of his arm. Not knowing if the catheter might pierce a vein, he put his life at risk. Forssmann was nevertheless successful; he safely passed the catheter into his heart. 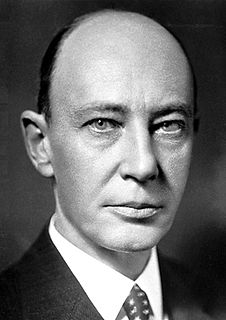 George Richards Minot was an American medical researcher who shared the 1934 Nobel Prize with George Hoyt Whipple and William P. Murphy for their pioneering work on pernicious anemia. 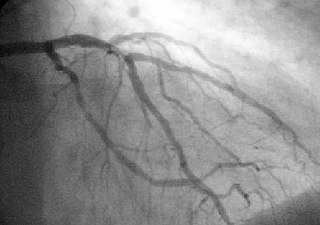 A coronary catheterization is a minimally invasive procedure to access the coronary circulation and blood filled chambers of the heart using a catheter. It is performed for both diagnostic and interventional (treatment) purposes.

The year 1956 in science and technology involved some significant events, listed below. 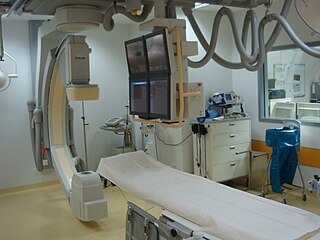 André Frédéric Cournand was a French-American physician and physiologist.

Electronics for Medicine, commonly known as "E for M," was a pioneering company in medical electronics. Founded in the 1950s by Martin Scheiner to make instrumentation for recording physiological signals from the heart, it was based in Westchester County, New York.

The Hospital de Clínicas "José de San Martín" is a teaching hospital located in Buenos Aires, Argentina. It belongs to the University of Buenos Aires (UBA), currently the best ranked university in that country.

Isaac "Jack" Starr, known as the father of ballistocardiography, was an American physician, heart disease specialist, and clinical epidemiologist notable for developing the first practical ballistocardiograph. His early academic positions included being an assistant professor in pharmacology and later the first Hartzell Professor of Research Therapeutics at the Perelman School of Medicine at the University of Pennsylvania as well as dean of the school from 1945 to 1948. 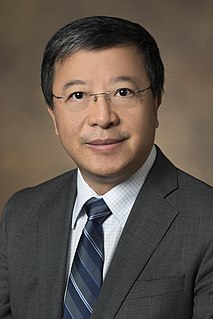 Harry Washington Fritts Jr. was an American physician, professor of medicine, and the founding chair of the Department of Medicine of the Stony Brook University School of Medicine.