Diminished major seventh chords are very dissonant, containing the dissonant intervals of the tritone and the major seventh. They are frequently encountered, especially in jazz, as a diminished seventh chord with an appoggiatura, especially when the melody has the leading note of the given chord: the ability to resolve this dissonance smoothly to a diatonic triad with the same root allows it to be used as a temporary tension before tonic resolution. It is nevertheless infrequently used as a chord in itself. 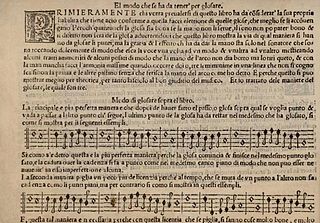 In Western music and music theory, diminution has four distinct meanings. Diminution may be a form of embellishment in which a long note is divided into a series of shorter, usually melodic, values. Diminution may also be the compositional device where a melody, theme or motif is presented in shorter note-values than were previously used. Diminution is also the term for the proportional shortening of the value of individual note-shapes in mensural notation, either by coloration or by a sign of proportion. A minor or perfect interval that is narrowed by a chromatic semitone is a diminished interval, and the process may be referred to as diminution.

In music, a triad is a set of three notes that can be stacked vertically in thirds. The term "harmonic triad" was coined by Johannes Lippius in his Synopsis musicae novae (1612).