Last updated July 12, 2021
For the ancient Siberian people, see Dingling.
In this Chinese name, the family name is Ding .

Ding Ling was born into a gentry family in Linli, Hunan province. Her father died when Ding was three. Ding Ling's mother, who raised her children alone while becoming an educator, was Ding's role model, and she would later write an unfinished novel, titled Mother, which described her mother's experiences. Following her mother's example, Ding Ling became an activist at an early age. [2] Ding Ling fled to Shanghai in 1920 in repudiation of traditional Chinese family practices by refusing to marry her cousin who had been chosen to become her husband. She rejected the commonly accepted view that parents as the source of the child's body are its owners, and she ardently asserted that she owned and controlled her own body.

Ding Ling was influenced by progressive teachers at the People's Girls School, and by her association with modern writers such as Shen Congwen and the left-wing poet Hu Yepin, whom she married in 1925. She began writing stories around this time, most famously Miss Sophia's Diary , published in 1927, in which a young woman describes her unhappiness with her life and confused romantic and sexual feelings. Miss Sophia's Diary highlights Ding Ling's close association and belief in the New Woman movement which was occurring in China during the 1920's. In 1931, Hu Yepin was executed in Shanghai by the Kuomintang government for his association with the Communists. In March 1932 she joined the Chinese Communist Party, and almost all of her fiction after this time was in support of its goals. [3] She was active in the League of Left-Wing Writers.

Active in the Communist revolutionary cause, she was placed under house arrest in Shanghai by the Kuomintang for a three-year period from 1933 to 1936. She escaped, and made her way to the Communist base of Yan'an. There she became one of the most influential figures in Yan'an cultural circles, serving as director of the Chinese Literature and Arts Association and editing a newspaper literary supplement.

Ding Ling struggled with the idea that revolutionary needs, defined by the party, should come before art. She objected to the gender standards at work in Yan'an. In 1942 she wrote an article in a party newspaper, titled Thoughts on March 8 , questioning the party's commitment to change popular attitudes towards women. She satirized male double standards concerning women, saying they were ridiculed if they focused on household duties, but also became the target of gossip and rumors if they remained unmarried and worked in the public sphere. She also criticized male cadres use of divorce provisions to rid themselves of unwanted wives. Her article was condemned by Mao Zedong and the party leadership, and she was forced to retract her views and undergo a public self-confession.

Her main work in these years was the novel The Sun Shines Over Sanggan River, which she completed in 1948. It followed the complex results of land reform on a rural village. It was awarded the Stalin prize for Literature in 1951, and is considered one of the best examples of socialist-realist fiction. It did not, however, address gender issues.

Always a political activist, in 1957 she was denounced as a "rightist", purged from the party, and her fiction and essays were banned. She spent five years in jail during the Cultural Revolution and was sentenced to do manual labor on a farm for twelve years before being "rehabilitated" in 1978.

In her introduction to Miss Sophie's Diary And Other Stories, Ding Ling explains her indebtedness to the writers of other cultures:

I can say that if I had not been influenced by Western literature I would probably not have been able to write fiction, or at any rate not the kind of fiction in this collection. It is obvious that my earliest stories followed the path of Western realism... A little later, as the Chinese revolution developed, my fiction changed with the needs of the age and of the Chinese people... Literature ought to join minds together... turning ignorance into mutual understanding. Time, place and institutions cannot separate it from the friends it wins... And in 1957, a time of spiritual suffering for me, I found consolation in reading much Latin American and African literature.

A few years before her death, she was allowed to travel to the United States where she was a guest at the University of Iowa's International Writing Program. Ding Ling and her husband Chen Ming visited Canada in 1981 for 10 days, meeting with Canadian writers Margaret Laurence, Adele Wiseman, [4] and Geoff Hancock; and even Canada's first female Lieutenant Governor, Pearl McGonigal for the province of Manitoba. Ding Ling died in Beijing on March 4, 1986.

She authored more than three hundred works. After her "rehabilitation" many of her previously banned books such as her novel The Sun Shines Over The Sanggan River were republished and translated into numerous languages. Some of her short works, spanning a fifty-year period, are collected in I Myself Am A Woman: Selected Writings Of Ding Ling. [5]

Michelle Reis, also known as Lee Ka-yan, is a Hong Kong actress of Portuguese and Chinese origin. She is the winner of Miss Chinese International Pageant 1988 and Miss Hong Kong 1988 beauty pageants.

Shen Congwen, formerly romanized as Shen Ts'ung-wen, is considered to be one of the greatest modern Chinese writers, on par with Lu Xun. Regional culture and identity plays a much bigger role in his writing than that of other major early modern Chinese writers. He was known for combining the vernacular style with classical Chinese writing techniques. Shen is the most important of the "native soil" writers in modern Chinese literature. Shen Congwen published many excellent compositions in his life, the most famous of which is the novella Border Town. This story is about the old ferryman and his granddaughter Cuicui's love story. Shen Congwen and his wife Zhang Zhaohe were married in 1933, Shen Congwen and Zhang Zhaohe had two sons after their marriage.

Yu Lihua was a Chinese writer who authored over thirty works - novels, short stories, newspaper articles and translations in a span of sixty years. She is regarded as "one of the five most influential Chinese-born women writers in the postwar era and the progenitor of the Chinese students' overseas genre." She wrote primarily in Chinese, drawing on her experience as a Chinese émigré in postwar America. She was celebrated in the diaspora for giving voice to what she called the "rootless generation" — émigrés who had left for a better life but remained nostalgic for their homeland.

Xie Bingying, was originally born as Xie Minggang, and her courtesy name is Fengbao. She was a Chinese soldier and writer, most well-known for her autobiographies of her life as a soldier in the Nationalist Army.

Tani Barlow is a scholar of feminism, postcoloniality, and history in Asia and most specifically in China. She is the George and Nancy Rupp Professor of Humanities at Rice University. Formerly, Barlow was a professor of history and women studies at the University of Washington. She is known for her research on Chinese feminism. 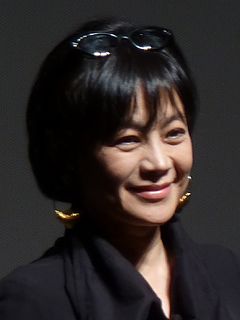 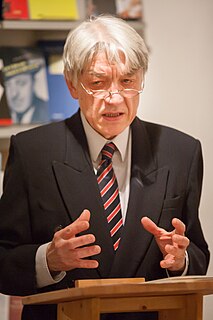 Wolfgang Kubin is a German poet, essayist, sinologist and translator of literary works. He is the former director of the Institute for Oriental and Asian Studies at the University of Bonn, Germany. Kubin has frequently been a guest professor at universities in China, for instance at Beijing Foreign Studies University, but also in Madison, Wisconsin and in Jerusalem. Since 1989, Kubin has been the editor of the journals ORIENTIERUNGEN: Zeitschrift zur Kultur Asiens and Minima sinica: Zeitschrift zum chinesischen Geist.

Shu Ting is the pen name of Gong Peiyu, a modern Chinese poet associated with the Misty Poets. She began writing poetry in the 1970's and later had her works published.

Miss Sophia's Diary, or The Diary of Miss Sophie, is a short story by the Chinese author Ding Ling, in which a young woman describes, through diary entries, her thoughts and emotions, particularly about relationships, sexuality, and identity. 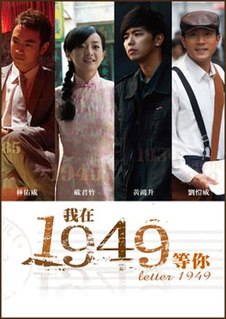 Ling Shuhua, also known as Su-hua Ling Chen after her marriage, was a Chinese modernist writer and painter whose short stories became popular during the 1920s and 1930s. Her work is characterized by her use of symbolism and boudoir literature.

The Last Tycoon is a 2012 Hong Kong period drama film directed by Wong Jing, starring Chow Yun-fat, Sammo Hung, Francis Ng and Huang Xiaoming. The film was released in mainland China on 22 December 2012, and in Hong Kong on 3 January 2013. The story is loosely inspired by the life of Du Yuesheng, a prominent mob boss in Shanghai in the 1920s and 1930s.

Chen Hengzhe, pen name Sophia H. Z. Chen, was a pioneering writer in modern vernacular Chinese literature, a leader in the New Culture Movement, and the first female professor at a Chinese university. Chen is known for aiming to educate Chinese people by incorporating values from both Western culture and Chinese culture, producing many works reflecting these values.

Hu Yepin was a Chinese writer, poet, and playwright. A prominent member of the League of Left-Wing Writers, he was one of the Five Martyrs of the Left League executed in February 1931 by the Kuomintang government.

Despite a long-held belief in China that women lacked literary talent, women's works – particularly poetry – did win a degree of respect within Chinese literature during the Imperial period. During the first half of the 20th century, writing by women reflected feminist ideas and the political upheavals of the time. Women writers conveyed expression from a feminine perspective, as opposed to man writers who conveyed expressions from a masculine perspective.

Thoughts on March 8 was written in 1942 by Ding Ling, wherein she discusses her thoughts on politics and the role of women in China in the context of March 8, Women's Day. The essay was originally published in Liberation Daily, a newspaper that Ding Ling edited. She understood the Chinese Communist Party's (CCP) policies surrounding women's rights to be inconsistent and insufficient. Ding Ling further criticizes the double standard between men and women surrounding social issues such as divorce, abortion, and remaining unmarried. She invites women to strengthen themselves against the oppression that they face, as well as advocating for the CCP to act on liberating women through creating a discussion on the topic as well as monitoring their own "moral conduct."

When I was in Xia Village was a short story written in 1940 by Ding Ling, a Chinese writer. The story was originally published in June 1941 in China's Culture, a Yan'an journal, which tells the story of a young woman named Zhen Zhen, who was abducted and forced into sexual servitude by the invading Japanese. She later worked as a spy for the Chinese Communist Party (CCP) as a Japanese army prostitute to collect wartime information.Zhen Zhen was treated differently with honor, pity, and disdain by her fellow villagers, as well as by Party members upon her return to Xia village.