Diodorus Siculus, or Diodorus of Sicily (Greek : Διόδωρος Diodoros; fl. 1st century BC), was an ancient Greek historian. He is known for writing the monumental universal history Bibliotheca historica , in forty books, fifteen of which survive intact, [1] between 60 and 30 BC. The history is arranged in three parts. The first covers mythic history up to the destruction of Troy, arranged geographically, describing regions around the world from Egypt, India and Arabia to Europe. The second covers the time from the Trojan War to the death of Alexander the Great. The third covers the period to about 60 BC. Bibliotheca, meaning 'library', acknowledges that he was drawing on the work of many other authors.

According to his own work, he was born in Agyrium in Sicily (now called Agira). [2] With one exception, antiquity affords no further information about his life and doings beyond his written works. Only Jerome, in his Chronicon under the "year of Abraham 1968" (49 BC), writes, "Diodorus of Sicily, a writer of Greek history, became illustrious". However, his English translator, Charles Henry Oldfather, remarks on the "striking coincidence" [3] that one of only two known Greek inscriptions from Agyrium ( Inscriptiones Graecae XIV, 588) is the tombstone of one "Diodorus, the son of Apollonius". [4]

Diodorus' universal history, which he named Bibliotheca historica (Greek : Βιβλιοθήκη Ἱστορική, "Historical Library"), was immense and consisted of 40 books, of which 1–5 and 11–20 survive: [5] fragments of the lost books are preserved in Photius and the Excerpts of Constantine Porphyrogenitus.

It was divided into three sections. The first six books treated the mythic history of the non-Hellenic and Hellenic tribes to the destruction of Troy and are geographical in theme, and describe the history and culture of Ancient Egypt (book I), of Mesopotamia, India, Scythia, and Arabia (II), of North Africa (III), and of Greece and Europe (IV–VI).

In the next section (books VII–XVII), he recounts the history of the world from the Trojan War down to the death of Alexander the Great. The last section (books XVII to the end) concerns the historical events from the successors of Alexander down to either 60 BC or the beginning of Julius Caesar's Gallic Wars. (The end has been lost, so it is unclear whether Diodorus reached the beginning of the Gallic War as he promised at the beginning of his work or, as evidence suggests, old and tired from his labours he stopped short at 60 BC.) He selected the name "Bibliotheca" in acknowledgment that he was assembling a composite work from many sources. Identified authors on whose works he drew include Hecataeus of Abdera, Ctesias of Cnidus, Ephorus, Theopompus, Hieronymus of Cardia, Duris of Samos, Diyllus, Philistus, Timaeus, Polybius, and Posidonius.

Wikisource has original works by or about:
Diodorus Siculus

Ctesias, also known as Ctesias the Cnidian or Ctesias of Cnidus, was a Greek physician and historian from the town of Cnidus in Caria, who lived during the time that Caria was part of the Achaemenid Empire.

Corythus is the name of six mortal men in Greek mythology.

In Greek mythology, Tenes or Tennes was the eponymous hero of the island of Tenedos.

In Greek mythology, Ochimus was the eldest of the Heliadae, sons of Helios and Rhodos.

In Greek mythology, Thamyris was a Thracian singer. He is notable in Greek mythology for reportedly being a lover of Hyacinth and thus to have been the first male to have loved another male, but when his songs failed to win his love from the god Apollo, he challenged the Nine Muses to a competition and lost.

In Greek mythology, Eryx may refer to the following personages:

In Greek mythology and history, Promachus is a name that refers to several different people. 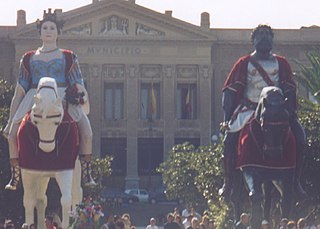 Zanclus is the legendary first king of the Sicilian city of Messina. He is mentioned in an etiological passage by Diodorus of Sicily, and has become a symbol of Messina. In modern Italian, the form is given as Zanclo. 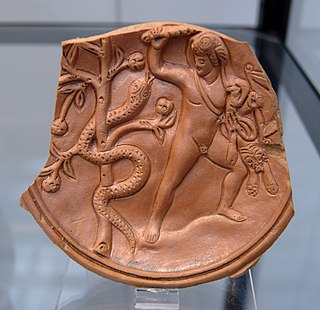 Ladon was a monster in Greek mythology, the dragon that guarded the golden apples in the Garden of the Hesperides.

In Greek mythology, Eurypyle may refer to the following personages:

Hippotes may refer to a number of people from Greek mythology:

In Greek Mythology, Phaeax was a son of Poseidon and Korkyra (Cercyra), from whom the Phaeacians derived their name. He was the father of Alcinous and Locrus. 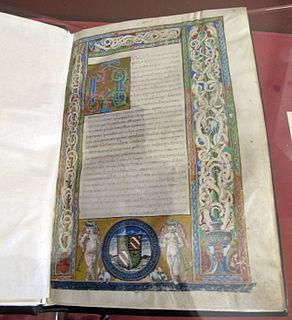 In Greek mythology, Andreus may refer to two distinct individuals:

In Greek mythology, the name Hemithea refers to:

In Greek mythology, Eioneus is a name attributed to the following individuals:

In Greek mythology, Syleus was a man of Aulis, Lydia killed by Heracles for his nefarious deeds. He was the father of Xenodoce.

In Greek mythology, Creusa was a Naiad and daughter of Gaia. She bore Hypseus, future king of the Lapiths and Stilbe to the river god Peneus. Through Hypseus she was grandmother of Cyrene, one of the best known lovers of Apollo while her daughter Stilbe gave birth to twin sons to Apollo. These sons were Lapithes and Centaurus progenitors of the Lapiths and the Centaurs.

In Greek mythology, Iphitos or Īphitus was an Oechalian prince and one of the Argonauts.