The divisions of Bangladesh are divided into 64 [1] districts or zila. [2] The downtown of a district is called a district city (Jela Shodor), which translates to "District Downtown". The districts are further subdivided into 492 sub-districts or upazila. [3]

Before independence, Bangladesh (then known as East Pakistan) had 20 districts.

In April 2018, the government changed the English spelling of five districts to avoid inconsistencies in the Bengali and English spellings. The spellings have been changed from Bogra to Bogura, Barisal to Barishal, Jessore to Jashore, Chittagong to Chattogram and Comilla to Cumilla. [4]

A deputy commissioner (popularly abbreviated to "DC") is the executive head of the district. Deputy commissioners are appointed by the government from the deputy secretary BCS Administration Cadre.

The functions of a district council include construction and maintenance of roads, and bridges, building hospitals and dispensaries, schools and educational institutions, health facilities and sanitation, tube wells for drinking water, rest houses, and coordination of activities of the Union parishads within the district. 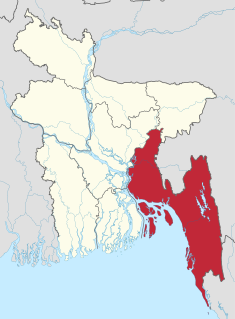 Chittagong Division, officially known as Chattogram Division, is geographically the largest of the eight administrative divisions of Bangladesh. It covers the south-easternmost areas of the country, with a total area of 33,909.00 km2 (13,092.34 sq mi) and a population at the 2011 census of 28,423,019.^[6] The administrative division includes mainland Chittagong District, neighbouring districts and the Chittagong Hill Tracts.

Rajshahi Division is one of the eight first-level administrative divisions of Bangladesh. It has an area of 18,174.4 square kilometres (7,017.2 sq mi) and a population at the 2011 Census of 18,484,858. Rajshahi Division consists of 8 districts, 70 Upazilas and 1,092 Unions. The divisional capital of Rajshahi is only six-seven hours road journey away from Dhaka, the capital city. Rajshahi Division is located in western Bangladesh. It is bounded by the Padma River to its south and Jamuna River, to its east. It shares a border with the Indian state of West Bengal to its west and the Rangpur Division to its north. 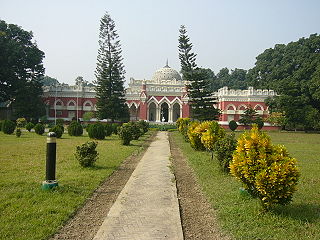 Natore is a district of Rajshahi Division located in northern Bangladesh. It borders the metropolitan city of Rajshahi, and used to be part of Rajshahi district. 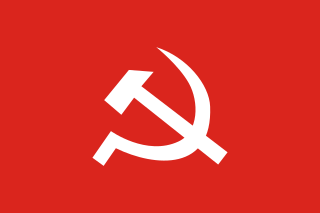 Purba Banglar Sarbahara Party is a communist party in Bangladesh. The party played a role in the independence struggle of the country. In the early 1970s it engaged in armed struggle supporting the new Bangladeshi state. Since then its political fortunes have dwindled, having suffered from several waves of internal divisions. The group remains active, and still carries out violent attacks against its opponents.

Schumannianthus dichotomus, also known as 'cool mat', was first described by Roxburgh, with its current name after Gagnepain. The plant belongs to the family Marantaceae and no subspecies are listed.

Sitalpati, also called sital pati and sittal pati, is a kind of mat which feels cold by nature. It is made from murta plants. It is usually used in Bangladesh and in the Indian state of West Bengal. Mats with decorative designs are called nakshi pati.

Noakhali Sadar is an upazila of Noakhali District in the Division of Chittagong, Bangladesh. Noakhali Thana was established in 1861 and was converted into an upazila in 1984. The upazila takes its name from the district and the Bengali word sadar (headquarters). It is the subdistrict where the district headquarters, Noakhali town, is located. The town is situated on the western bank of the Noakhali Canal, from which it takes its name. The Noakhali Canal was dug in 1660 to control flooding of the river Dakatia. The name Noakhali means "New canal", derived from the Bengali words noa (new) and khal (canal).

Bogra Sadar Upazila is an upazila of Bogra District in the Division of Rajshahi, Bangladesh. Bogra Thana was established in 1821 and was converted into an upazila in 1983. The upazila takes its name from the district and the Bengali word sadar (headquarters). It is the subdistrict where the district headquarters, Bogra town, is located.

Shibganj Upazila is an upazila of Bogra District in the Division of Rajshahi, Bangladesh. The upazila was created in 1983. It is named after its administrative center, the town of Shibganj.

Sujanagar is an upazila of Pabna District in the Division of Rajshahi, Bangladesh. The upazila is the home of agriculture across the district.

Ullapara is an upazila in Sirajganj District, Rajshahi Division, Bangladesh. It is known as the gateway to North Bengal, since the Dhaka-Rangpur and Dhaka-Rajshahi highways intersect at Hatikumrul in Ullapara.

The Assam Bengal Railway (ABR) was one of the pioneering railway companies in British India. Headquartered in Chittagong, it functioned from 1892 to 1942.

Comilla Division is a proposed administrative division within Bangladesh for the north-western parts of the existing Chittagong Division, comprising Brahmanbaria, Comilla, Chandpur, Noakhali, Feni, and Lakshmipur Districts of Chittagong Division. It covers the south-easternmost areas of the country, with a total area of 12,848.53 km2 (4,960.85 sq mi) and a population at the 2011 census of 16,708,000.

Nouka Baich is a traditional dragon boat-style paddling sport of Bangladesh. The Bangladesh Rowing Federation, established in 1974, is the authority of all rowing activities in Bangladesh and has organised over 40 National Rowing Championships. The races are held during the wet and autumn seasons of the Bengali calendar which corresponds from June to October in the Gregorian calendar. The "Nowka Bais" which takes place annually in Birmingham is a leading cultural event in the West Midlands, United Kingdom attracting not only the Bangladeshi diaspora but a variety of cultures. It is also the largest kind of boat race in the United Kingdom.

Zearkandi Union is a union parishad under Titas Upazila of Comilla District in the Chittagong Division of eastern Bangladesh.