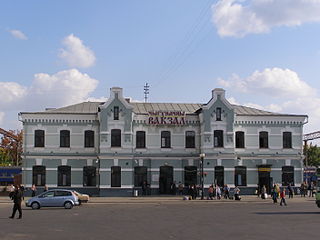 Loyew District or Lójeŭski Rajon is a district (raion) of Belarus located in the Gomel Region. Its administrative center is Loyew.

Kamenets District is a district (raion) of Brest Region, in Belarus. Its administrative center is Kamenets.

Stolin District or Stolinski Rayon is district (raion) in the southeast of the Brest Region, Belarus. Its administrative center is in the city of Stolin. The region has a population of 89,000 people, of which 26,300 people live in urban areas.

Zhodzina (officially transliterated as Žodzina, also spelled Zhodino, Belarusian: Жо́дзіна, pronounced [ˈʐodzʲina], Russian: Жо́дино, pronounced [ˈʐodʲɪnə], Polish: Żodzino, is a city in Belarus, located in the Minsk Region, 50 km north-east of Minsk. The city covers an area of 19 km² and has a population of 61,800.

Vileyka Voblast was a territorial entity in the Belarusian Soviet Socialist Republic created on 4 December 1939 out of the eastern powiats of the Wilno Voivodeship after the annexation of West Belarus into the BSSR on 14 November 1939. The administrative centre of the province was the city of Vileyka.

Hotsimsk District is a raion (district) in Mogilev Region, Belarus, the administrative center is the urban-type settlement of Khotsimsk. As of 2009, its population was 13,057. Population of Khotsimsk accounts for 54.3% of the district's population. Khotimsk Raion is the easternmost district of the country. The extreme eastern point of Belarus lies to the East of Hotimsk urban-type settlement.

Media related to Districts of Belarus at Wikimedia Commons