An okrug is one of the first-level administrative divisions of Serbia, corresponding to a " province " in many other countries (Serbia also claims two autonomous provinces). The term okrug (pl. okruzi) literally means "encircling", and can also be translated as "county", though it is generally rendered by the Serbian government as "district".

The Serbian local government reforms of 1992, going into effect the following year, created 29 districts, [1] with the City of Belgrade holding similar authority. Following the controversial 2008 Kosovo declaration of independence, new districts were created by the so-called Republic of Kosovo government; the Serbian government does not recognize these districts.

The districts of Serbia are generally named after historical and geographical regions, though some, such as the Pčinja District and the Nišava District, are named after local rivers. Their areas and populations vary to a large extent, ranging from the relatively-small Podunavlje District to the much larger Zlatibor District.

As regional centers of state authority, the districts have little room for self-government and do not have local flags. Still, they are each run by a commissioner as well as cooperating municipal leaders. The districts can be further divided into cities and municipalities.

The territorial organisation of Serbia is regulated by the Law on Territorial Organization, adopted by the National Assembly on 29 December 2007. [2] According to the Law, the territorial organization of the republic comprises municipalities and cities, the City of Belgrade with special status, and autonomous provinces. Districts are not mentioned in this law but are defined by the Government of Serbia's Enactment of 29 January 1992. They are defined as the districts as "regional centers of state authority", enacting affairs run by the relevant Ministries.

Serbian laws treat Kosovo and Metohija as integral part of Serbia (Autonomous Province of Kosovo and Metohija). The Enactment defines five districts on the territory of Kosovo. [2] But, since 1999, following the Kosovo War Kosovo is under United Nations' administration of UNMIK. In 2000, the UNMIK administration changed territorial organisation on the territory of Kosovo. All five districts were abolished, and seven new districts were created. Serbian government does not recognize this move, and accepts only five pre-2000 districts.

Five of Serbian Districts are on the territory of Kosovo, comprising 28 municipalities and 1 city. In 2000, UNMIK created 7 new districts [ citation needed ] and 30 municipalities. Serbia does not exercise sovereignty over this polity. For the UNMIK districts and the districts of Kosovo, see Districts of Kosovo. Because the Serbian government has no control over Kosovo since it declared independence, it was not included in Serbia's 2011 census. For current demographic information about Kosovo, see Kosovo's 2011 census.

The United Nations Interim Administration Mission in Kosovo (UNMIK) is the officially mandated mission of the United Nations in Kosovo. The UNMIK describes its mandate as being to "help the United Nations Security Council achieve an overall objective, namely, to ensure conditions for a peaceful and normal life for all inhabitants of Kosovo and advance regional stability in the western Balkans." The political status of Kosovo, also known as the Kosovo question, is the subject of a long-running political and territorial dispute between the Serbian government and the Government of Kosovo, stemming from the breakup of Yugoslavia (1991–92) and the ensuing Kosovo War (1998–99). In 1999 the administration of the province was handed on an interim basis to the United Nations under the terms of UNSCR 1244 which ended the Kosovo conflict of that year. That resolution reaffirmed the sovereignty of Serbia over Kosovo but required the UN administration to promote the establishment of 'substantial autonomy and self-government' for Kosovo pending a 'final settlement' for negotiation between the parties.

ISO 3166-2:RS is the entry for Serbia in ISO 3166-2, part of the ISO 3166 standard published by the International Organization for Standardization (ISO), which defines codes for the names of the principal subdivisions of all countries coded in ISO 3166-1.

The 2008 Serbian local elections in Kosovo were held on 11 May 2008, together with Serbia's parliamentary elections and elections in Vojvodina. UNMIK authorities have criticized Serbia organizing

The Assembly of the Community of Municipalities of the Autonomous Province of Kosovo and Metohija, was the assembly of the association of local governments created by the municipal authorities in Kosovo elected in the May 11, 2008 municipal elections called by the Government of Serbia. It was created in Kosovska Mitrovica to represent the municipalities that defy the 2008 Kosovo declaration of independence. The Assembly is composed of 45 representatives delegated by 26 municipalities. The majority of delegates are ethnic Serbs, while some represent Gorani, Bosniak and Romani communities. 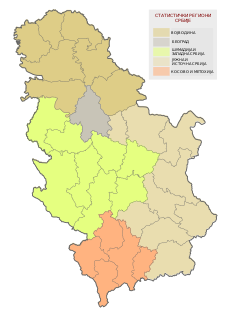 The Governance of Kosovo operates in the context of the disputed territory of Kosovo.

State Road 31 is an IB-class road in western and southern Serbia, connecting Raška with Serbia/Kosovo-North Macedonia border at Đeneral Janković. It is located in Šumadija and Western Serbia and Kosovo and Metohija regions. The section between Jarinje and Đeneral Janković is under control of Kosovo government and UNMIK. 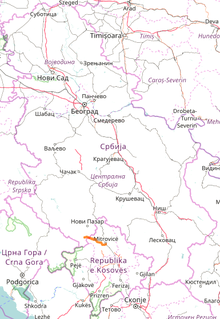 State Road 32 is an IB-class road in western and southern Serbia, connecting Ribariće with Kosovska Mitrovica. It is located in Šumadija and Western Serbia and Kosovo and Metohija regions. The section between Vitkoviće and Kosovska Mitrovica is under control of Kosovo government and UNMIK.

State Road 39 is an IB-class road in eastern and southern Serbia, connecting Pirot with Montenegro at Čakor. It is located in Southern and Eastern Serbia and Kosovo and Metohija regions. The section between Mutivode and Čakor is controlled by Kosovo government and UNMIK. 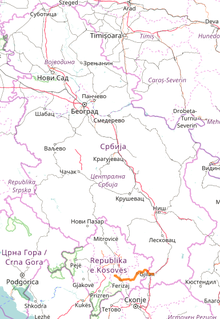 State Road 41 is an IB-class road in southern Serbia, connecting Bujanovac with Štimlje. It is located in Southern and Eastern Serbia and Kosovo and Metohija regions. The section between Končulj and Štimlje is controlled by Kosovo government and UNMIK. 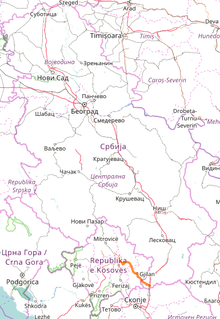 State Road 42 is an IB-class road in southern Serbia, connecting Čukarka with Čaglavica. It is located in Southern and Eastern Serbia and Kosovo and Metohija regions. The section between Depče and Čaglavica is controlled by Kosovo government and UNMIK. 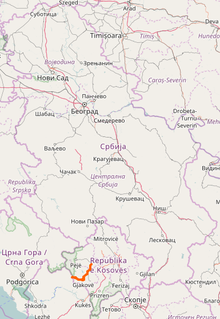 State Road 45 is an IB-class road in southern Serbia, connecting Dolac with Morina. It is located in Kosovo and Metohija. The road is controlled by Kosovo government and UNMIK.