Divis ( /ˈdɪvɪs/ ; from Irish Dubhais 'black ridge') [2] is a mountain and area of sprawling moorland north-west of Belfast in County Antrim, Northern Ireland. With a height of 1,568 ft (478 m), it is the highest of the Belfast Hills. [1] It is joined with the neighbouring Black Mountain, and in the past they may have been seen as one. [2] Divis transmitting station is on the summit. The mountain extends north to the Antrim Plateau and shares its geology; consisting of a basaltic cover underlain by limestone and lias clay.

Only recently have the Divis area and its surrounding mountains been handed over to the National Trust; from 1953 to 2005, it was under the control of the Ministry of Defence. It was also used as a training area for the British Army. It might have been released earlier, but due to the period of unrest known as the Troubles, the British Government and military viewed the area as a useful vantage point, overlooking Belfast. 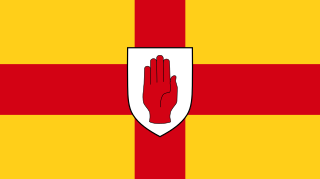 The Ulster Defence Association (UDA) is an Ulster loyalist paramilitary group in Northern Ireland. It was formed in September 1971 as an umbrella group for various loyalist groups and undertook an armed campaign of almost twenty-four years as one of the participants of the Troubles. Its declared goal was to defend Ulster Protestant loyalist areas and to combat Irish republicanism, particularly the Provisional Irish Republican Army (IRA). In the 1970s, uniformed UDA members openly patrolled these areas armed with batons and held large marches and rallies. Within the UDA was a group tasked with launching paramilitary attacks; it used the cover name Ulster Freedom Fighters (UFF) so that the UDA would not be outlawed. The British government outlawed the "UFF" in November 1973, but the UDA itself was not proscribed as a terrorist group until August 1992. 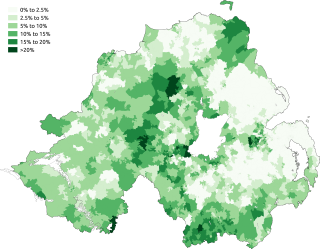 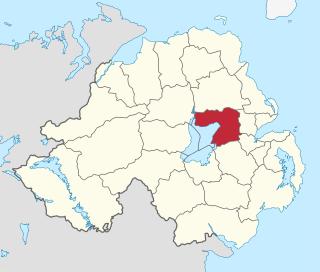 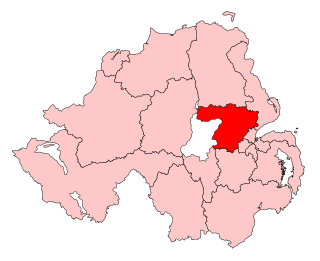 Falls Road is the main road through west Belfast, Northern Ireland, running from Divis Street in Belfast city centre to Andersonstown in the suburbs. The name has been synonymous for at least a century and a half with the Catholic community in the city. The road is usually referred to as the Falls Road, rather than as Falls Road. It is known as the Faas Raa in Ulster-Scots. 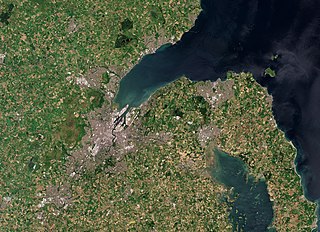 The Oval is a football stadium in Belfast, Northern Ireland, which has been home to Glentoran F.C. since 1892. 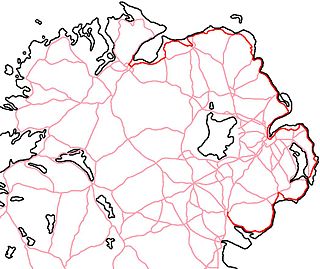 Sir Charles Lanyon DL, JP was an English architect of the 19th century. His work is most closely associated with Belfast, Northern Ireland.

The Black Mountain transmitting station is a broadcasting and telecommunications facility, situated on land 301 metres (988 ft) above Ordnance Datum to the west of the city of Belfast, in Northern Ireland. It includes a guyed steel lattice mast which is 228.6 metres (750 ft) in height. The height of the top of the structure above mean sea level is 529 metres (1,736 ft). It is owned and operated by Arqiva.

Divis Tower is a 20-floor, 200-foot (61 m) tall tower in Belfast, Northern Ireland. It is located in Divis Street which is the lower section of the Falls Road. It is currently the fifteenth-tallest building in Belfast. 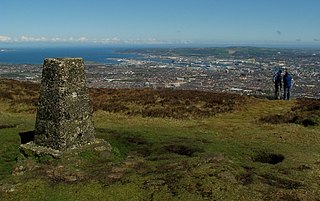 Black Mountain is a large hill which overlooks the city of Belfast, Northern Ireland. With a height of 1,275 ft, it towers over most of west Belfast and is part of the Belfast Hills. Its name is probably derived from the adjoining mountain called Divis, and they may have been seen as one mountain in the past. On the summit is Black Mountain transmitting station.

The Blackstaff River is a watercourse in County Antrim, Northern Ireland. It rises on the eastern slope of the Black Mountain before flowing down into the Bog Meadows and passing under the city of Belfast, where it enters the River Lagan. Much of its course has been culverted and built upon since the 19th century, making it largely invisible today. Its tributaries include the Forth or Clowney River, which meets it beneath the Broadway Roundabout in West Belfast.

Divis transmitting station is the main high-power UHF and BBC National FM/DAB station that serves County Antrim and parts of County Down.