Diwaliben Punjabhai Bhil (2 June 1943 – 19 May 2016), also known as Diwaliben Punjabhai Ladhia, was a Gujarati folk singer and playback singer from Gujarat, India. Her talent was discovered late; she then sang on radio and in Gujarati films. She was awarded the Padma Shri in 1990. She was also recognized as a "Gujarat ni Koyal" by public.

Diwaliben Bhil was born on 2 June 1943 [1] in Dalkhania village (now in Dhari Taluka, Amreli district, Gujarat) to Punjabhai and Monghiben in a tribal family. [2] [3] [4] Her original surname was Ladhiya. [4] Inspired by her mother, she started singing traditional garba songs at an early age. She was a primary-school dropout, but had taught herself folk singing. [5] She moved to Junagadh at the age of nine, when her father found a job on the Junagadh State Railway. She was married in Rajkot at the age of nine, but her marriage was declared null and void after only two days due to disagreements; she never married again. Around the age of twenty, she got a job in a hospital and worked there for ten years. Later, she worked as a domestic helper in the nurses' quarters of the Junagadh Public Hospital. [4] She moved to Junagadh and lived with her brother in the Ghanghiram area. [3]

In 1964, Gujarati folk singer Hemu Gadhvi spotted her talent and arranged her first recording for the All India Radio-Rajkot for a payment of five Rupees. Social worker Ratubhai Adani took her to Delhi, where she won the first prize in the Folk Music Festival. Musician Kalyanji heard her during her stage performance in Mumbai, and invited her to sing as a playback singer in Gujarati films. Jesal Toral (1971) was her first film and her song "Paap Taru Parkash Jadeja.." from the film become very popular. She travelled across India and abroad for performances. [4] She conducted several stage performances with Pranlal Vyas. [3] She worked in a primary school of Gomta village near Gondal. [4]

Diwaliben was a self-taught singer, and did not receive any formal education in music. [2] 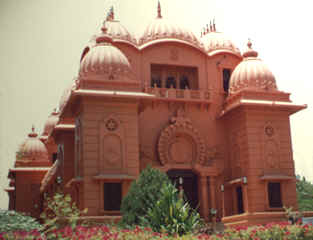 Rajkot is the fourth-largest city in the state of Gujarat, India, after Ahmedabad, Surat and Vadodara and is in the centre of the Saurashtra region of Gujarat. Rajkot is the 35th-largest metropolitan area in India, with a population of more than 2 million as of 2021. Rajkot is the 6th cleanest city of India, and it is the 7th fastest-growing city in the world as of March 2021. The city contains the administrative headquarters of the Rajkot District, 245 km from the state capital Gandhinagar, and is located on the banks of the Aji and Nyari rivers. Rajkot was the capital of the Saurashtra State from 15 April 1948 to 31 October 1956, before its merger with Bombay State on 1 November 1956. Rajkot was reincorporated into Gujarat State on 1 May 1960.

Gujarat, a western state of India, is known for music traditions of both folk and classical music.

Rajkot district is one of the 33 districts of the Indian state of Gujarat. Located in Saurashtra peninsula, Rajkot city is the administrative headquarters of the district. It is the third-most advanced district in Gujarat and the fourth most populus.

Ghoomar or Ghumar is a traditional folk dance of Rajasthan. It was Bhil tribe who performed it to worship Goddess Sarasvati which was later embraced by other Rajasthani communities. The dance is chiefly performed by veiled women who wear flowing dresses called ghaghara. It was ranked 4th in the list of "Top 10 local dances around the world" in 2013. The dance typically involves performers pirouetting while moving in and out of a wide circle. The word ghoomna describes the twirling movement of the dancers and is the basis of the word ghoomar.

Vachara Dada, also spelled as Vachhra Dada or Vasra Dada, also known as Vachchhraj Dada or Vatsaraj is a folk deity of Gujarat state in India. He is an eminent warrior-hero of the region. Hindus and Muslims alike honor him.

The culture of Gujarat is both ancient, new, and modern.

Jhaverchand or Zaverchand Kalidas Meghani was an Indian poet, writer, social reformer and freedom fighter. He is a well-known name in the field of Gujarati literature. He was born in Chotila where the Government College has been renamed for this literary as Raashtreeya Shaayar Zaverchand Meghani College, Chotila. Mahatma Gandhi spontaneously gave him the title of Raashtreeya Shaayar. Besides this he received many awards like Ranjitram Suvarna Chandrak and Mahida Paaritoshik in literature. He authored more than 100 books. His first book was a translation work of Rabindranath Tagore's called Kathaa-u-Kaahinee titled Kurbani Ni Katha which was first published in 1922. He contributed widely to Gujarati folk literature. He went from village to village in search of folk-lores and published them in various volumes of Saurashtra Ni Rasdhar. He was also the Editor of Phulchhab Newspaper of Janmabhoomi group.

Hemant Chauhan is an Indian writer and singer associated with Gujarati literature and music. He was born in 07 November 1955 in Kundni village in Rajkot district of Gujarat. He specializes in Bhajan, religious and Garba songs and other folk genres. He received 'Akademi Ratna Award 2011' for his contribution to traditional folk music of Gujarat on 9 October 2012. He is frequently referred to as the Bhajan King of Gujarati Music, and is also considered to be one of the best singers of Sugam Sangeet. He has a huge fan base and following all over the world including India, United Arab Emirates, United Kingdom, United States of America and East Africa. His fan base outside India is made up of people of Gujarati heritage. With an extensive catalogue of hit songs and bhajans, his “Kathiya Wadi Lok Dayra and Bhajan Sandhya” concert tour in North America in early 2007 was a huge hit. He has released many albums of devotional music. He has the mastery in Gujarati Bhajans and he himself believes that he has gained popularity and fame by singing Gujarati Bhajans, especially the Bhajans of great Gujarati saint-poet Dasi Jivan. His first album was released in 1978 namely 'Dasi Jivan na Bhajano', which was a huge hit across Gujarat. Till then he has sung more than 5000 bhajans and many other devotional items. 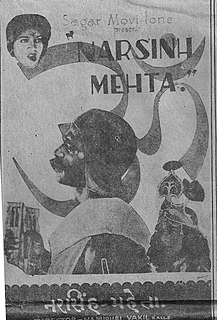 Gujarati cinema, informally referred to as Dhollywood or Gollywood, is the Gujarati language film industry. It is one of the major regional and vernacular film industries of the cinema of India, having produced more than one thousand films since its inception.

Mor Bani Thanghat Kare, originally titled Navi Varsha is a 1944 Gujarati song translated by poet Jhaverchand Meghani which was published in his anthology Ravindra-Veena (1944). It was later composed by Hemu Gadhvi. The song is a loosely translated version of "Navavarsha" by Rabindranath Tagore.

Urmila Bhatt was an actress of Hindi cinema. She started acting in Drama Theatre. She joined Sangeet Kala Academy in Rajkot as a folk dancer and singer. It was during that time that her famous Gujarati drama Jesal Toral ran to more than a thousand performances. She acted in more than 75 Gujarati films and also in 15 to 20 Rajasthani movies. She had also played character roles in Hindi films for over two and a half decades. She had also acted in various television serials. She had also been honoured with numerous awards by the government of Gujarat.

Dhirubhai Premshankar Thaker was an Indian Gujarati writer, who was best known for creating the Gujarati Vishwakosh, a 25-volume encyclopedia of the Gujarati language.

Ramesh Mehta was an Indian actor, comedian and scriptwriter. He is considered to be the "Charlie Chaplin of Gujarat". He has acted in plays and in more than 190 Gujarati films. He wrote the scripts of several Gujarati films, including Hast Melap, Jesal Toral, Ghunghat, Raja Bharathari, Hothal Padamani and Valo Namori.

Jesal Toral is a 1971 Indian Gujarati devotional film written and directed by Ravindra Dave. It proved to be one of the biggest hits of Gujarati cinema and ran for 25 weeks in theatres.

Dadudan Pratapdan Gadhvi, also known as Kavi Dad, was a Gujarati poet and folk singer from Gujarat, India. He was awarded the Padma Shri in 2021.

Aditya Gadhvi is a playback singer and lyricist from Gujarat, India. He has rendered film songs in several Indian languages and has many chart hits. He is involved in Gujarati film scoring and has released a number of singles. He created and released a special song for Independence Day