Last updated August 16, 2020
‹ The template Infobox settlement is being considered for merging. ›
Commune and town in Boumerdès, Algeria

Djinet (Arabic: جنّات Jannāt), the classical Cissi, is a port town and commune in the Bordj Menaïel District of Boumerdès Province, Algeria, east of the mouth of the Isser River and around Cape Djinet. As of 2008, the population of the municipality is 21,966. [1]

The town is particularly notable for its power plant and accompanying desalination unit. [2] A fishing port recently built there, originally scheduled to open in 2007, became fully operational only in 2016 due to problems with sand accumulation. [3]

Djinet was a Phoenician and Carthaginian colony under the name Kissi or Kishi (Punic : 𐤊‬𐤔‬, KŠ, if Lipiński's interpretation of an inscription found there is accepted [4] ) The name was hellenized as Kissḗ. [5]

After the Punic Wars, it fell under Roman control. Its name was Latinized as Cissi and it was placed into the province of Mauretania Caesariensis. It appeared on the Tabula Peutingeriana . [6] The ruins of a 4th or 5th-century Christian church could still be easily distinguished at Cape Djinet up to the 19th century, but little trace now remains. [6]

After 484, it disappears from written sources for several centuries, including the 7th-8th century Muslim conquest of the Maghreb, only to reappear in the 11th century work of al-Idrisi under the new name of Jannād, after a Berber tribe then living in the area. [7] It was known to medieval European geographers as Berengereto. By the 18th century, Djinet was a small port town serving the farmers of the surrounding lowlands, described by Thomas Shaw in the following terms:

...we come to the little port of Jinnett, from which a great quantity of grain is shipped off yearly to Christendom. Jinnett is a small creek, with tolerably good anchoring grounds before it; and was probably Edrisi's Mers' el Dajaje, or Port of Hens. I was told that Jinnett, or Paradise, was given to this place, on account of a row-boat, which was once very providentially conducted within the creek, when the mariners expected every moment to have perished upon the neigbouring rocks. [8]

Roman Cissi was a Christian bishopric, suffragan to the metropolitan of Carthage. The names of two of its bishops are known:

The diocese was nominally restored in 1933 as the Catholic titular bishopric of Cissi (Latin : dioecesis Cissitana). [10] Its bishops have been:

Djinet is connected to the rest of the country through a single main road: RN 24, a coastal road leading to Algiers in the west (via Zemmouri) and Bejaia in the east (via Dellys). [11]

Kelibia (Kélibia), often referred to as Klibia or Gallipia by European writers, is a coastal town on the Cap Bon peninsula, Nabeul Governorate in the far north-eastern part of Tunisia. Its sand beaches are considered some of the finest in the Mediterranean.

Abitinae was a town in the Roman province of Africa Proconsularis and is famed for the Martyrs of Abitinae. 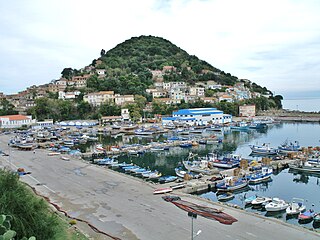 Collo was an ancient Roman–Berber city in the northern Skikda Province, Algeria. It was the capital and one of three municipalities of Collo District, and a Catholic titular episcopal see under its Roman name Chullu. In 1998, it had a population of 27,800.

Beniane is a town and commune in Mascara Province, Algeria at the site of ancient Ala Miliaria, a former bishopric which earns a Latin Catholic titular see. 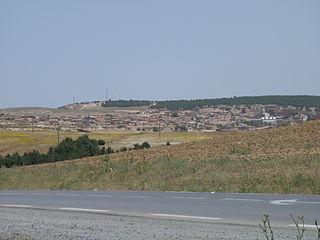 Khemisti is a town and commune in Tissemsilt Province in northern Algeria. It was called Bourbaki when Algeria was a colony of France.

Bonusta was a town, not far from Carthage, in the Roman province of Africa Proconsularis. No trace of it has been identified.

El-Kentour (الكنتور) is a town and mountain in Algeria. It is located in the Constantine Mountains. El-Kentour is also the site of the El-Ouahch to El-Kentour tunnel, which is part of the National Road 3.

Bouderies is a settlement in Kasserine, Tunisia, in North Africa. 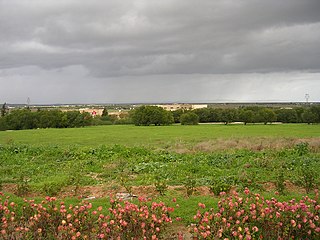 Cissita was a town and bishopric of Roman North Africa, which only remains as a Catholic titular see.

Drusiliana was a civitas (town) of Roman North Africa. Bingham called it a city of the Roman province of Mauretania Caesariensis. An inscription of Constantine the Great was found in the city ruins and it appears on the Tabula Peutingeriana The town has been tentatively identified with ruins near Khanguet-el-Kdim in northern Algeria. . Located at 36.249547N, 8.907667E. Epigraphical evidence suggest Constantine the Great undertook some works in the city in 312AD.

Cubda was an ancient city in Tunisia. It is a titular bishopric of the Roman Catholic Church.

Botriana is a locality and archaeological site in Tunisia

Henchir-Baldia is an archaeological site and locality in southern Tunisia. The stone ruins are tentatively associated with Bladia, a civitas of the Roman province of Byzacena during the Roman Empire. It was a Catholic bishopric.

The Diocese of Bennefa is a home suppressed and titular see of the Roman Catholic Church. Bennefa, identifiable with Oglet-Khefifa in modern Tunisia, is an ancient civitas of the Roman province of Byzacena. and a seat of an ancient Christian episcopal see. The diocese was mentioned by Augustine of Hippo.

Crepedula was an ancient Roman–Berber civitas in the province of Byzacena in Africa Proconsularis. It was located in modern Tunisia. The town was also the seat of a Catholic diocese.

Edistiana was an ancient Roman–Berber city in the province of Africa Proconsularis and in late antiquity of Byzacena. It was located in the modern Tunisia. It was a former Catholic diocese.

Rusazus was a Phoenician, Carthaginian, and Roman town located near Cape Corbelin, Algeria. Its ruins are near the town of Azeffoun.

Rusubbicari was a Phoenician and Carthaginian colony and Roman town. It has been tentatively identified with ruins at Zemmouri El Bahri, Algeria. The Roman town was in the province of Mauretania Caesariensis.

The diocese of Betagbarar is a suppressed and now titular see of the Roman Catholic Church.

The diocese of Dionysiana is a suppressed and titular see of the Roman Catholic Church.