The district has three sub-districts:

Nineveh Governorate is a governorate in northern Iraq that contains the ancient Assyrian city of Nineveh. It was an integral part of Assyria from the 25th century BC to the 7th century AD. It has an area of 37,323 km2 (14,410 sq mi) and an estimated population of 2,453,000 people in 2003. Its chief city and provincial capital is Mosul, which lies across the Tigris river from the ruins of ancient Nineveh. Tal Afar is the second-biggest city. Before 1976, it was called Mosul Province and included the present-day Dohuk Governorate, which is now part of the autonomous Kurdistan Region. 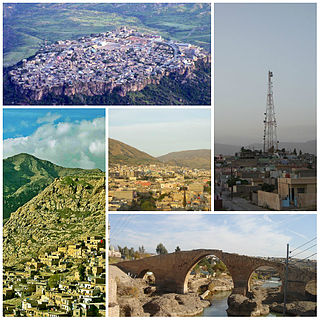 Dohuk Governorate is a governorate in the autonomous region of Kurdistan Region. Its capital is the city of Dohuk. It includes Zakho, the city that meets Ibrahim Khalil border between Turkey and Iraq. It borders the Al-Hasakah Governorate of Syria. Before 1976, it was part of Nineveh Governorate, which was called Mosul Governorate. Dohuk Governorate is natively inhabited by Kurds and Assyrians. The estimated population in 2018 was 1,292,535.

Zakho is a city in the Kurdistan Region of Iraqi Kurdistan, at the centre of the eponymous Zakho District of the Dohuk Governorate, located a few kilometers from the Iraqi–Turkish border. The city has a population of 212,000.

Dohuk is a city in Iraq.

Simele is a town located in the Dohuk province of Kurdistan Region in Iraq. The town is on the main road that connects Iraq to its neighbour Turkey. It is 14 km (8.7 mi) west of the city of Dohuk. The town in inhabited by Kurds with minorities of Arabs, Assyrians, Yazidis and Armenians.

The history of Armenians in Iraq is documented since late Babylonian times. The Tigris and Euphrates rivers both have their sources in the Armenian Highland, hence, the land of Iraq and the land of Armenia have always been connected. Today it is estimated that there are around 10,000–15,000 Armenians living in Iraq, with communities in Baghdad, Mosul, Basra, Kirkuk, Baqubah, Dohuk, Zakho and Avzrog. They make up the second largest solely Christian ethnicity in the country, after the indigenous Assyrians.

Mangesh is an Assyrian town in the region of Dohuk, Kurdistan Region in Iraq. The town is located in the Sapna valley between Amedi to the east and Zakho to the west. The town has lots of historic architecture, as it was not destroyed during the Al-Anfal Campaigns of 1988 like most of the other villages and towns in the region, and is the regional center of Mangesh Commune.

Tamar Ramadhan Fattah Kuchar was the governor of Iraq's Dahuk province in Iraqi Kurdistan between 2005 and 2013. He has been actively involved in further developing Dahuk's educational and infrastructure capabilities.

Zakho District is a district in northwestern Dohuk Governorate in the Kurdistan Region of Iraq. The city of Zakho is the administrative center. 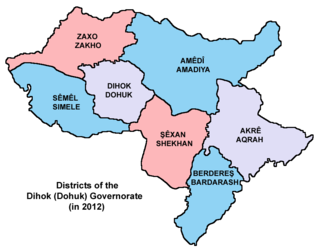 Amadiya District is a district in northern central Dohuk Governorate within Kurdistan Region. Administrative center is the city of Amadiya.

Simele District is a district in western Dohuk Governorate in Kurdistan Region, Iraq. The administrative center is the city of Simele. It has 143,200 inhabitants, mostly consisting of Kurds with a significant Assyrian population.

Mangesh Keshav Padgaonkar was a Marathi poet from Maharashtra, India

Barwar also known as Barwari and Barwari Bala, is a region situated in northern Dohuk Governorate of Kurdistan Region and Hakkari Province in southeastern Turkey. The region is mostly populated by Assyrians and the Kurdish Berwarî tribe. Despite straddling two countries and two provinces, Barwar was historically situated in the single Assyrian and Kurdish region of Hakkari.

Throughout history there were few proposals for the establishment of an autonomy or an independent state for the Syriac-speaking Assyrians in northern Iraq.

The 2011 Dohuk riots refers to riots which began on December 2, 2011 in the Dohuk Governorate, Iraq. They were instigated by Friday prayers' sermons by Ismail Osman Sindai, a radical Kurdish imam, calling for attacks against stores selling alcohol and massage parlours in Zakho. The riots soon developed into the looting and burning down of Assyrian and Yazidi-owned properties in other towns in the governorate, causing four million dollars of damage.

Mangesh Tendulkar was an Indian artist as cartoonist and humourist. He has also written in many magazines on cartoons.