A dōjō ( 道場 , Japanese pronunciation:  [doꜜː(d)ʑoː] [note 1] ) is a hall or place for immersive learning or meditation. This is traditionally in the field of martial arts, but has been seen increasingly in other fields, such as meditation and software development. The term literally means "place of the Way" in Japanese.

The word dōjō originates from Buddhism. Initially, dōjō were adjunct to temples and were formal training places for any of the Japanese arts ending in "-dō", from the Chinese Tao (or Dao), meaning "way" or "path". Sometimes meditation halls where Zen Buddhists practice zazen meditation were called dōjō. [1] The alternative term zen-do is more specific, and more widely used. European Sōtō Zen groups affiliated with the International Zen Association prefer to use dōjō instead of zendo to describe their meditation halls as did their founding master, Taisen Deshimaru.

In Japan, any facility for physical training, including professional wrestling, may be called a dōjō. [2] In the Western world, the term dōjō (when related to physical activity) is used exclusively for Japanese martial arts such as aikidō , judō , karate-dō , etc. [3]

A proper Japanese martial arts dōjō is considered special and is well cared for by its users. Shoes are not worn in a dōjō. In many styles it is traditional to conduct a ritual cleaning (sōji) of the dōjō at the beginning and/or end of each training session. Besides the obvious hygienic benefits of regular cleaning it also serves to reinforce the fact that dōjō are supposed to be supported and managed by the student body (or by special students, e.g., uchi-deshi), not the school's instructional staff. This attitude has become lost in many modern dōjō that are founded and run by a small group of people or instructors.[ citation needed ] In fact, it is not uncommon that in traditional schools (koryu), dōjō are rarely used for training at all, instead being reserved for more symbolic or formal occasions. The actual training is conducted typically outdoors or in a less formal area.[ citation needed ]

Many traditional dōjō follow a prescribed pattern with shomen ("front") and various entrances that are used based on student and instructor rank laid out precisely. Typically students will enter in the lower-left corner of the dōjō (in reference to the shomen) with instructors in the upper right corner. Shomen typically contains a Shintō shrine with a sculpture, flower arrangement, or other artifacts. The term kamiza means "place of honor" and a related term, kamidana refers to the shrine itself. Other artifacts may be displayed throughout the dōjō, such as kanban that authorize the school in a style or strategy, and items such as taiko drums or armor ( Ō-yoroi ). It is not uncommon to find the name of the dōjō and the dōjō kun (roughly "dōjō rules") displayed prominently at shomen as well. Visitors may have a special place reserved, depending on their rank and station. Weapons and other training gear will normally be found on the back wall.

A honbu dōjō is the central training facility and administrative headquarters of a particular martial arts style.

Some well-known dōjō located in Japan are:

Other names for training halls

Other names for training halls that are equivalent to "dojo" include the following:

The term dōjō is also increasingly used for other forms of immersive-learning space.

The term dōjō is sometimes used to describe the meditation halls where Zen Buddhists practice zazen meditation. [1] The alternative term zen-do is more specific, and more widely used. European Sōtō Zen groups affiliated with the International Zen Association prefer to use dōjō instead of zendo to describe their meditation halls as did their founding master, Taisen Deshimaru.

Aikido is a modern Japanese martial art developed by Morihei Ueshiba, as a synthesis of his martial studies, philosophy and religious beliefs. Ueshiba's goal was to create an art that practitioners could use to defend themselves while also protecting their attackers from injury. Aikido is often translated as "the way of unifying (with) life energy" or as "the way of harmonious spirit". According to the founder's philosophy, the primary goal in the practice of aikido is to overcome oneself instead of cultivating violence or aggressiveness. Morihei Ueshiba used the phrase "masakatsu agatsu katsuhayabi" to refer to this principle.

Randori (乱取り) is a term used in Japanese martial arts to describe free-style practice. The term denotes an exercise in 取り tori, applying technique to a random succession of uke attacks. 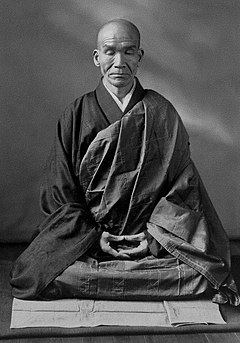 Zazen is a meditative discipline that is typically the primary practice of the Zen Buddhist tradition. The meaning and method of zazen varies from school to school, but in general it can be regarded as a means of insight into the nature of existence. In the Japanese Rinzai school, zazen is usually associated with the study of koans. The Sōtō School of Japan, on the other hand, only rarely incorporates koans into zazen, preferring an approach where the mind has no object at all, known as shikantaza.

Zendō (禅堂) or senbutsu-jō (選仏場) is a Japanese "meditation hall". In Zen Buddhism, the zen-dō is a spiritual dōjō where zazen is practiced. A full-sized Zen Buddhist temple will typically have at least one zen-dō as well as a hon-dō, which is used for ceremonial purposes, plus a variety of other buildings with different functions. However, any place where people go to practice Zen can be referred to as a zen-dō.

Morihiro Saito was a teacher of the Japanese martial art of aikido, with many students around the world. Saito's practice of aikido spanned 56 years, from the age of 18, when he first met aikido founder Morihei Ueshiba, until his death in 2002. 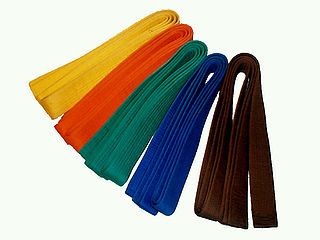 Kazuo Chiba was a Japanese Aikido teacher and founder of Birankai International. He served for seven years as uchideshi at the Aikikai Hombu Dojo before being dispatched abroad to help develop Aikido internationally. He held an 8th dan in Aikido, issued by Aikikai world headquarters in Tokyo, Japan and was active in Aikido for over 50 years. 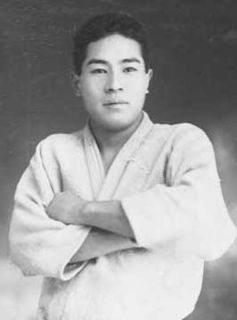 Keikogi (稽古着), or dōgi, is a uniform for training in Japanese martial arts and their derivatives. The prototype for the modern keikogi emerged in the late 19th century. The keikogi was developed by judo founder Kanō Jigorō. Japanese martial arts historian Dave Lowry speculates Kanō derived the uniform's design from the uniforms of Japanese firefighters' heavy hemp jackets, hanten (半纏). By 1920, the keikogi as it exists today was worn by Kanō's students for judo practice. The Kodokan has a photo taken in 1920 that shows Kanō wearing a modern keikogi. 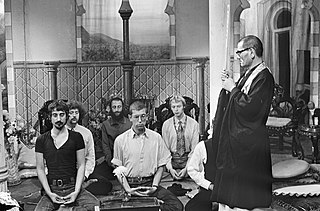 Nobuyoshi Tamura was a prominent aikidoka and a direct student of Morihei Ueshiba. The son of a kendo teacher, Tamura entered the Aikikai Hombu Dojo in 1953 as an uchi-deshi of aikido founder Morihei Ueshiba. He was one of Ueshiba's favorite pupils and since 1964 has greatly contributed to the development of aikido in Europe and France in particular. He was the National Technical Director (DTN) of the FFAB. He held the rank of 8th dan and the title of Shihan. Throughout his teaching career he trained many others instructors in various countries around the world but foremost Western Europe. In 1999, he received the medal of "Chevalier de l'ordre National du Mérite" from the French government. Tamura published several books on aikido in French. His dojo, Shumeikan Dojo, is located in the village of Bras, France. His former students include Jorge Rojo Gutierrez, Toshiro Suga, Pierre Chassang and Alain Peyrache.

Kenshiro Abbe was a prominent Japanese master of judo, aikido, and kendo. He introduced aikido to the United Kingdom in 1955, and founded the Kyushindo system. Abbe was a graduate of the Budo Senmon Gakko, having studied judo and kendo there. Following an illustrious early career in the martial arts, he served in the Imperial Japanese Army before and during World War II. He then trained in aikido under its founder, Morihei Ueshiba, for a decade. Abbe held dan ranks in several martial arts, most notably 8th dan in judo, 6th dan in aikido, and 6th dan in kendo. After introducing aikido to the UK, he established several Japanese martial arts councils there during the late 1950s. He returned to Japan in 1964 and remained there for most of the remainder of his life. There are contradictory accounts of Abbe's final years, but it appears that he was in poor spirits and poor health towards the end.

Fumio Toyoda was a Japanese aikido teacher and lay Zen master who taught extensively in the United States and Europe.

Ōmori Sōgen was a Japanese Rinzai Rōshi, a successor in the Tenryū-ji line of Rinzai Zen, and former president of Hanazono University, the Rinzai university in Kyoto, Japan. He became a priest in 1945.

Nafudakake is a Japanese method of displaying all the names of the members in a group by collecting the names on individual plaques called nafuda and hanging them together in a specialized case called kake. Nafudakake can be found in traditional art forms such as chadō, in modern art forms such as judo, at Shinto shrines and in some modern organizations such as volunteer fire departments. In English, the term is most commonly associated with Japanese martial arts, and nafudakake are commonly considered an element of a traditional martial arts dojo. 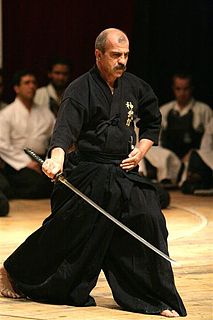 Soleiman Mehdizadeh is an Iranian master of Budō.

The Cultural School of Goleta is a multi-purpose venue built by Ken and Miye Ota. The facility consists of a large ballroom with a sprung hardwood floor, two crystal chandeliers, a raised stage and is surrounded by built-in benches for seating. There is also an attached industrial kitchen, audio system, changing room, and storage for the additional chairs and tables. Also present, are removable tatami mats, which when applied to the entire ballroom floor, convert the space into a martial arts dojo, with a shomen at the main wall.