Last updated May 24, 2021
Cuban baseball player
In this Spanish name, the first or paternal surname is De Guzmánand the second or maternal family name is Luque.

A native of Havana, Luque played winter baseball in the Cuban League from 1912 to 1945 and was also a long-time manager in the league. [3] Additionally, he managed in Mexico in all or parts of eight seasons spanning 1946–1956. [4]

Luque debuted with the Boston Braves in 1914. In 1918, he was traded to the Cincinnati Reds, with whom he played the next 12 seasons. In the notorious 1919 World Series, he appeared in two games as a relief pitcher. Luque also played for the Brooklyn Robins/Dodgers from 1930 to 1931 and with the New York Giants from 1932 to 1935. He was with the Giants in the 1933 World Series, and, pitching in relief, won the fifth and final game over the Washington Senators, thus becoming (at age 43) the oldest pitcher ever to win a World Series game. [5] [6] He ended his career with a record of 194–179 and a 3.24 ERA.

As a blue-eyed, fair-skinned, white Cuban, he was one of several white Cubans to make it in Major League Baseball at a time when non-whites were excluded. Between 1911 and 1929 alone, seventeen Cuban-born Caucasian players played in the Major Leagues. Many of them, including Luque, also played Negro league baseball with integrated teams from Cuba. Luque played for Cuban Stars in 1912 and the Long Branch Cubans in 1913 before signing with organized baseball (Riley, 498).

Luque was known to have a temper. While with the Brooklyn Dodgers, a heckler in the stands hollered "Lucky Luque! Lucky Luque!" repeatedly. Luque went over to the dugout and told manager Wilbert Robinson, "I tell you, Robbie, if this guy don't shut up, I'm gonna shut him up." "Aw, come on, Dolf", said the manager. "He paid his way in—let him boo." Just then the heckler spotted the rotund Robinson and yelled, "Hey, fat belly!" Robinson said, "OK, Dolf—go ahead and clobber the jerk." Luque obliged his manager's request.

Luque made his professional debut in Cuba for the Habana baseball club against a Major League opponent, the Philadelphia Phillies, in an exhibition series in the fall of 1911. He left the game after 8 innings with his team ahead 6–5, but his reliever failed to hold the lead and left Luque with a no decision. He then pitched against the New York Giants, going 1–2, getting the only win for Habana in six games. He debuted in the Cuban League in the winter of 1912, but went 0–4, 0–2, and 2–4 his first three seasons. In 1914/15 he moved to Almendares and had his first winning season, going 7–4. The following season he led the league in wins with a 12–5 record. The next winter, 1917, he tied for the league lead in wins and also led in hitting with a .355 average. [9]

In 1919/20 Luque became a playing manager for Almendares and led the team to a championship in his first season at the helm, the first of seven championships as a manager. He contributed on the pitching mound with a 10–4 record, leading the league in wins. In 1922/23 he moved to Habana (where Miguel Angel González was manager) and again led the league in wins with an 11–9 record. The next season, he took over the helm as Habana's manager and went 7–2 as a pitcher. Later in the decade, Luque's Major League team, the Cincinnati Reds, did not allow him to play winter baseball in Cuba. Luque sometimes evaded the ban by playing under assumed names. [10]

Luque's career Cuban League pitching record was 106–71. Luque is the all-time Cuban League leader in years pitching with 22, ranking second behind Martín Dihigo in wins with 106, and seventh in winning percentage with .599. [12]

Luque is mentioned in Ernest Hemingway's 1952 novel The Old Man and the Sea , when Hemingway writes "Who is the greatest manager, really, Luque or Mike Gonzalez?." [13] 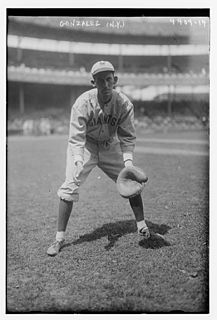 Miguel Angel González Cordero was a Cuban catcher, coach and interim manager in American Major League Baseball during the first half of the 20th century. Along with Adolfo Luque, González was one of the first Cubans or Latin Americans to have a long off-field career in the U.S. Major Leagues. 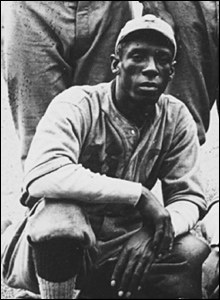 José de la Caridad Méndez was a Cuban right-handed pitcher and manager in baseball's Negro leagues. Born in Cárdenas, Matanzas, he died at age 41 in Havana. Known in Cuba as El Diamante Negro, he became a legend in his homeland. He was one of the first group of players elected to the Cuban Baseball Hall of Fame in 1939. He was elected to the U.S. National Baseball Hall of Fame in 2006.

The Habana club was one of the oldest and most distinguished baseball teams in the old Cuban League, which existed from 1878 to 1961. Habana, representing the city of Havana, was the only team to play in the league every season of its existence and was one of its most successful franchises. In their early history they were known by their colors as the Reds; later they adopted the names of Leones or Lions. Throughout their existence they had a famous rivalry with Almendares. 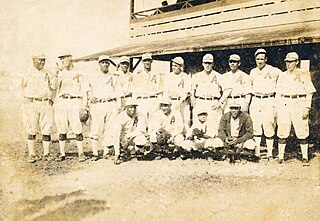 The Almendares club, also known as the Almendares Alacranes, was one of the oldest and most distinguished baseball teams in the old Cuban League, which existed from 1878 to 1961. Almendares represented the Almendares District on the outskirts of the old city of Havana—when the league was founded it was still considered a suburban area, but later became a district within the enlarged city. Almendares was one of the most successful franchises in the Cuban League. In their early history they were known by their colors as the Blues; later they adopted the name of Alacranes. Throughout their existence they had a famous rivalry with the Habana baseball club.

Conrado Eugenio Marrero Ramos, nicknamed "Connie", was a Cuban professional baseball pitcher. The right-handed Marrero pitched in Major League Baseball from 1950 to 1954 for the Washington Senators. Marrero made his major league debut when he was 38 years old, and was one of the oldest players in the league throughout the duration of his time in the major leagues. He was a popular star in his native Cuba, where he had a long and successful career in amateur baseball, pitching for Cuba in several Amateur World Series competitions, and playing several excellent seasons with the professional Cuban League and the minor league Havana Cubans. His nicknames in Cuba were "El Guajiro de Laberinto", reflecting his rural origins, "El Premier", and "El Curvo."

José Rodríguez, nicknamed "Joseíto" or "El Hombre Goma" in Spanish and "Joe" in English, was a Cuban infielder who played in Major League Baseball from 1916 to 1918 and in the Cuban League from 1914 to 1939. In the majors, he played for the New York Giants and was primarily a second baseman, while in the Cuban League and the U.S. minor leagues he mostly played first base. A defensive specialist, according to Roberto González Echevarría, Rodríguez "was considered the best defensive first baseman in Cuba" of his time. He was also a long-time manager in the Cuban League and managed for one season in the minors. He was inducted into the Cuban Baseball Hall of Fame in 1951.

The American Series was a set of baseball games played between Cuban and American teams in Cuba. An American team would travel to Cuba and play various professional, all-star and/or amateur Cuban teams throughout the country. The series usually took place either in the fall, after the end of the American season, or during spring training before the season began. The first American Series took place in 1879, with then minor league Worcester team going 2–0 against its Cuban opponents. 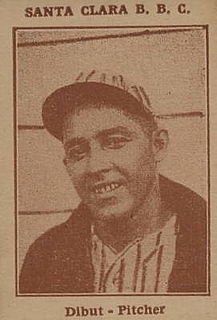 Pedro Dibut Villafana was a Major League Baseball pitcher who played for the Cincinnati Reds in 1924 and 1925. In 1923 Dibut played for the Cuban Stars (West) in the Negro National League, one of several white Cubans who played in both Negro league baseball and in the then-segregated major leagues.

The Leopardos de Santa Clara were a Cuban professional baseball team based in Santa Clara, Cuba. Founded in 1922, they played in the Cuban League from 1922 to 1925, from 1929 to 1930, and from 1935 to 1941. Although they competed for only 11 seasons, they won league championships in four regular seasons and in one "special season." According to Cuban League historian Jorge S. Figueredo, the 1923/24 team, which went 36–11 and won the championship by 11+1⁄2 games, is "considered as the most dominant team in the history of Cuban baseball."

Antonio María García Callaghan, nicknamed "El Inglés", was a Cuban baseball catcher in the Cuban League. He played from 1882 to 1905 with several Cuban ballclubs, including Almendares, the Fe club, Habana, and the All Cubans. He was elected to the Cuban Baseball Hall of Fame in 1939. 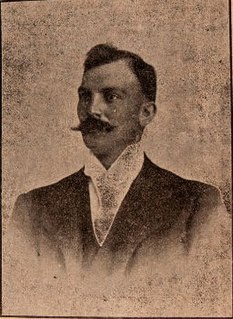 Moisés Quintero Cavada was a Cuban baseball catcher in the Cuban League and Negro leagues. He played from 1887 to 1904 with Habana, Progreso, Almendares, the All Cubans, and Club Fé. He was elected to the Cuban Baseball Hall of Fame in 1953.

The Marianao baseball club played in the Cuban Professional League between the 1922–1923 and 1960–1961 seasons. The club represented the populous town of Marianao in Havana and played their games at La Tropicana Stadium, official site of the league. 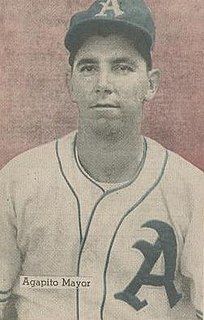 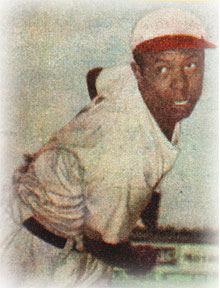 The Orientals were a Cuban baseball team in the Cuban League based in Havana. They played during the winter of 1916-1917 and Armando Marsans served as manager.