The Dolmabahçe Mosque is a mosque in Istanbul, Turkey. It was commissioned by queen mother Bezmi Alem Valide Sultan.

Istanbul, formerly known as Byzantium and Constantinople, is the most populous city in Turkey and the country's economic, cultural and historic center. Istanbul is a transcontinental city in Eurasia, straddling the Bosporus strait between the Sea of Marmara and the Black Sea. Its commercial and historical center lies on the European side and about a third of its population lives in suburbs on the Asian side of the Bosporus. With a total population of around 15 million residents in its metropolitan area, Istanbul is one of the world's most populous cities, ranking as the world's fourth largest city proper and the largest European city. The city is the administrative center of the Istanbul Metropolitan Municipality.

Turkey, officially the Republic of Turkey, is a transcontinental country located mainly on the Anatolian peninsula in Western Asia, with a smaller portion on the Balkan peninsula in Southeast Europe. East Thrace, the part of Turkey in Europe, is separated from Anatolia by the Sea of Marmara, the Bosphorous strait and the Dardanelles. Turkey is bordered by Greece and Bulgaria to its northwest; Georgia to its northeast; Armenia, the Azerbaijani exclave of Nakhchivan and Iran to the east; and Iraq and Syria to the south. Istanbul is the largest city while Ankara is the capital. Approximately 70 to 80 per cent of the country's citizens identify as Turkish. Kurds are the largest minority; the size of the Kurdish population is a subject of dispute with estimates placing the figure at anywhere from 12 to 25 per cent of the population.

The mosque's construction was originally backed by Bezm-i Alem Valide Sultan. After she died, Sultan Abdülmecid, her son, continued to support the construction of the mosque. Upon completion in 1855, it was opened for prayer services. [2] 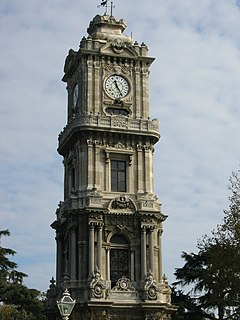 Dolmabahçe Clock Tower is a clock tower situated outside Dolmabahçe Palace in Istanbul, Turkey. Its construction was ordered by Ottoman sultan Abdülhamid II (1842–1918) and designed by the court architect Sarkis Balyan between 1890 and 1895.

Dolmabahçe Palace located in the Beşiktaş district of Istanbul, Turkey, on the European coast of the Strait of Istanbul, served as the main administrative center of the Ottoman Empire from 1856 to 1887 and 1909 to 1922.

Abdülaziz was the 32nd Sultan of the Ottoman Empire and reigned between 25 June 1861 and 30 May 1876. He was the son of Sultan Mahmud II and succeeded his brother Abdulmejid I in 1861. 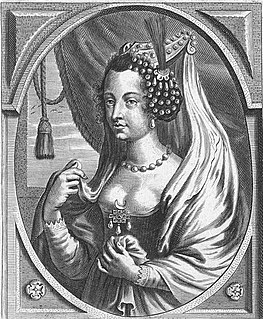 Turhan Hatice Sultan, was Haseki Sultan of the Ottoman Sultan Ibrahim and Valide Sultan as the mother of Mehmed IV. Turhan Hatice was prominent for the regency of her young son and her building patronage. She and her mother-in-law, Kösem Sultan, are the only two women in Ottoman history to be regarded as official regents and had supreme control over the Ottoman Empire. Turhan Hatice herself was the only one in Ottoman history to equally share the power of running the entire empire with Ottoman Sultan legally, although in fact she transferred her political power to the grand vizier. As a result, Turhan became one of the prominent figures during the era known as Sultanate of Women.

The Balyan family was a prominent Ottoman Armenian family of court architects in the service of Ottoman sultans and other members of the Ottoman dynasty during the 18th and 19th centuries. For five generations, they designed and constructed numerous major buildings in the Ottoman Empire, including palaces, mansions, konaks, kiosks, yalis, mosques, churches, and various public buildings, mostly in Constantinople.

Ortaköy Mosque, officially the Büyük Mecidiye Camii in Beşiktaş, Istanbul, Turkey, is situated at the waterside of the Ortaköy pier square, one of the most popular locations on the Bosphorus. 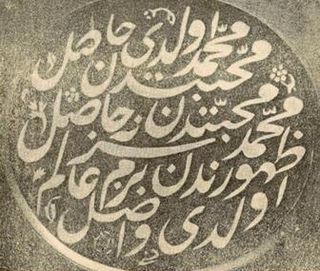 Bezmiâlem Sultan, meaning "Ornament of the Universe" in Persian, was the ninth wife of Sultan Mahmud II, and Valide Sultan to their son, Sultan Abdulmejid I of the Ottoman Empire. 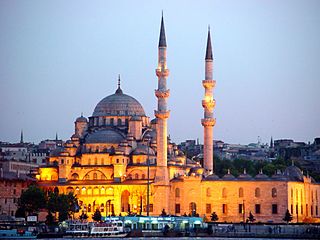 The New Mosque (Turkish: Yeni Camii, Turkish pronunciation: [jeni dʒami], originally named the Valide Sultan Mosque and later New Valide Sultan Mosque after its partial reconstruction and completion between 1660 and 1665, is an Ottoman imperial mosque located in the Eminönü quarter of Istanbul, Turkey. It is situated on the Golden Horn, at the southern end of the Galata Bridge. 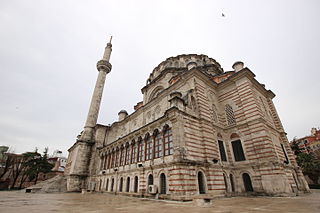 The Yeni Valide Mosque is an 18th-century Ottoman mosque in the Üsküdar district of Istanbul, Turkey.

The Teşvikiye Mosque is a neo-baroque structure located in the Teşvikiye neighbourhood of Şişli district in Istanbul, Turkey.

Abdülmecid I or Tanzimatçı Sultan Abdülmecid due to the Tanzimat reforms he conducted, he is also known as Abdulmejid and similar spellings, was the 31st Sultan of the Ottoman Empire and succeeded his father Mahmud II on 2 July 1839. His reign was notable for the rise of nationalist movements within the empire's territories. Abdulmejid wanted to encourage Ottomanism among the secessionist subject nations and stop the rise of nationalist movements within the empire, but failed to succeed despite trying to integrate non-Muslims and non-Turks more thoroughly into Ottoman society with new laws and reforms. He tried to forge alliances with the major powers of Western Europe, namely the United Kingdom and France, who fought alongside the Ottoman Empire in the Crimean War against Russia. In the following Congress of Paris on 30 March 1856, the Ottoman Empire was officially included among the European family of nations. Abdulmejid's biggest achievement was the announcement and application of the Tanzimat (reorganization) reforms which were prepared by his father and effectively started the modernization of the Ottoman Empire in 1839. For this achievement, one of the Imperial anthems of the Ottoman Empire, the March of Abdulmejid, was named after him. 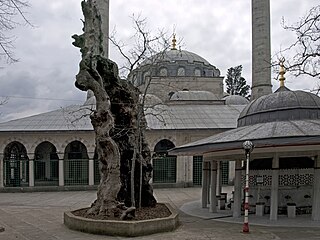 The Atik Valide Mosque is a 16th century Ottoman mosque located on a hill above the large and densely populated district of Üsküdar, in Istanbul, Turkey. It was built for Nurbanu Sultan, the wife of Sultan Selim II and formed part of a large complex that included a madrasa, guest-rooms and a double caravanseray. The mosque was designed by the imperial architect Mimar Sinan. Planning began in 1571 for a small mosque with a single minaret. The mosque was subsequently expanded and was not completed until 1586, three years after Nurbanu's death.

Pertevniyal Sultan, was a consort of Sultan Mahmud II, and Valide Sultan to their son Sultan Abdülaziz of the Ottoman Empire.

The Rum Mehmed Pasha Mosque is an old Ottoman mosque located in a large and densely populated district of Üsküdar, in Istanbul, Turkey. It was built for the Grand Vizier Rum Mehmed Pasha, who was of Greek origin. The mosque combines architectural elements of Ottoman and Byzantine styles. It was restored in 1953. 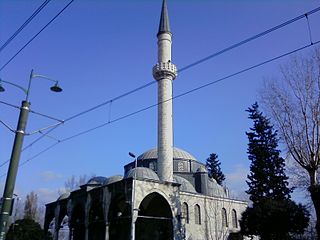 The Molla Çelebi Mosque, sometimes known as the Fındıklı Mosque is a 16th century Ottoman mosque located in the Fındıklı neighbourhood of the Beyoğlu district of Istanbul, Turkey. It was commissioned by Kazasker Mehmet Vusuli Efendi, chief judge of Istanbul and designed by the imperial architect Mimar Sinan. The mosque is located on the Bosphorus waterfront, close to the Kabataş ferry port and Dolmabahçe Mosque.