The Dom Luís I Bridge (Portuguese : Ponte de Dom Luís I), or Luís I Bridge, is a double-deck metal arch bridge that spans the River Douro between the cities of Porto and Vila Nova de Gaia in Portugal. At its construction, its 172 metres (564 ft) span was the longest of its type in the world. It has been confused with the nearby Maria Pia Bridge, a railway bridge that was built 9 years earlier (and is located 1 kilometre (0.62 mi) to the east), which is similar in aspect to the Luís I bridge.

In 1879, Gustave Eiffel presented a project to construct a new bridge over the Douro, with a high single deck in order to facilitate ship navigation. [2] This project was rejected due to dramatic growth of the urban population, which required a re-thinking of the limits of a single-deck platform. [2]

A competition was initiated in November 1880, in order to construct a double-deck metal bridge, which included projects by Compagnie de Fives-Lille, Cail & C., Schneider & Co., Gustave Eiffel, Lecoq & Co., Société de Braine-le-Comte, Société des Batignolles (which submitted two ideas), Andrew Handyside & Co., Société de Construction de Willebroek (also two projects) and John Dixon. [2] It was in January of the following year that deliberations by the committee supported the project of Société de Willebroek, a design that cost 369 000$000[ clarification needed ] réis and provided better carrying capacity. [2] On 21 November 1881, the public work was awarded to the Belgian Société de Willebreok, from Brussels, for 402 contos. It was to be administrated by Théophile Seyrig, a disciple of Gustave Eiffel and author of the project. Seyrig had worked on the D. Maria bridge with Eiffel, hence the resemblance of his new bridge to the D. Maria bridge. [2] Construction began on the Ponte Luís I alongside the towers of an earlier railway suspension bridge, the Ponte Pênsil, which was disassembled. [2]

By 26 May 1886, the first weight experiments began, with the transport of a 2,000 kilograms (4,400 lb) per metre. [2] On 30 October construction of the main arch and upper deck were concluded, resulting in its inauguration the very next day. [2] On 1 November, a toll system began to operate under the administration of the winning company, that was equal to 4 reís per person. [2] The following year the lower deck was inaugurated, completing the project. During its ceremonies, the bridge was blessed by Bishop D. Américo. [2]

By the turn of the century (1908) electric carriages were installed in the city centre, extending to the bridge. [2]

On 1 January 1944, the toll system was extinguished and the bridge began to function as free infrastructure of the municipal authority of Porto. [2] Originally and for more than a century, the bridge carried road traffic on both decks. Along with other vehicles, electric trams crossed the upper deck from 1908 [2] until May 1959, and trolleybuses crossed both decks from May 1959 until 1993. [3] By 1954, public works were initiated on the bridge under the direction of engineer Edgar Cardoso, who extended the decks and removed the electrification of the deck. [2]

In 1982, the bridge was designated a cultural heritage Imóvel de Interesse Público (Property of Public Interest) by national agency IGESPAR, the Portuguese Institute for the Management of Architectural and Archaeological Heritage. [4]

On 27 June 2003, the upper deck was closed to motor traffic in order to adapt the structure for the metro system. Infante Dom Henrique Bridge, 500 m (1,600 ft) upriver, was completed three months earlier to provide an alternative vehicle connection between Porto and Vila Nova de Gaia. The new "D Line" was inaugurated on 18 September 2005, and opened to the metro trams and pedestrian traffic. [2] With more traffic and demographic growth, in March 2006, a project to enlarge the lower deck was elaborated by architect Virgínio Moutinho and engineers António and José António Campos e Matos. [2] However, the municipal council of Porto asked the Direção-Geral do Património Cultural (Directorate-General for Cultural Patrimony) to avoid a decision on the project, as it was being rethought. [2]

The bridge is situated in an isolated, urban area over the River Douro between the granite banks, where the Cathedral of Porto and the escarpment of the Serra do Pilar, forming a box valley. It is 1 kilometre (0.62 mi) from the bridge of D. Maria Pia and, farther along, the Arrábida Bridge. [2] On the Porto side, the lower deck connects the Cais da Ribeira and the upper Avenida Vímara Peres, while the bank of Vila Nova de Gaia to the Avenida Diogo Leite and Avenida da República, respectively. Access to the Porto side is located along the Pillars of Ponte Pênsil, while the Guindais Funicular, the Church and Shelter of Ferro, the Fernandina Walls and the Monastery of Serra do Pilar. [2]

The iron bridge has two decks, of differing heights and widths, between which develop a large 172.5 metres (566 ft) diameter, central arch supporting these upper and lower decks. [2] Both decks are moored to the riverbanks by means of masonry piers. [2] Those in the upper deck, are rectangular with a trimmed cornice finish, consisting of two staggered registers separated by cornice and interlacing struts. [2] The lower deck is based on large foundations supporting molded cornices and wedges linked together by a felled arch, and framed by interlacing beams. [2] At the base of the arches, facing the riverbanks, are large marble plaques with inscriptions "PONTE LUIZ I", and on the upstream face are stones representing royal coat-of-arms, with a shield framed by garlands. [2] At the base of the lower deck, are iron-pillared, pyramidal-truncated pillars, erected in three sections, that attach to the upper deck. [2]

The bridge has an asphalt pavement for vehicular traffic, separated by cast iron guards, that limit the pedestrian sidewalks, that develop laterally. [2] The central arch emerges from the bollards at the foundations and decreasing thickness towards the center. [2] The upper deck, also flanked by pedestrian walkways protected by cast iron guards (similar to the lower deck), was also asphalt-paved [2] until converted to carry light rail trains of the Porto Metro in the mid-2000s. From this deck are lamps used for illumination, confronting and connected, forming decorative circles at the angles. Under the guard is cut-out-like lambrequin decorated with phytomorphic elements. [2]

Porto or Oporto is the second-largest city in Portugal and one of the Iberian Peninsula's major urban areas. Porto city is small compared to its metropolitan area, with a population of 237,559 people. Porto's metropolitan area has an estimated 1.7 million people (2019) in an area of 2,395 km2 (925 sq mi), making it the second-largest urban area in Portugal. It is recognized as a global city with a Gamma + rating from the Globalization and World Cities Research Network.

The Arrábida Bridge is an arch bridge of reinforced concrete which carries six lanes of traffic over the Douro River, between Porto and Vila Nova de Gaia, in the Norte region of Portugal.

The Maria Pia Bridge is a railway bridge built in 1877, and attributed to Gustave Eiffel, situated over the Portuguese northern municipalities of Porto and Vila Nova de Gaia. 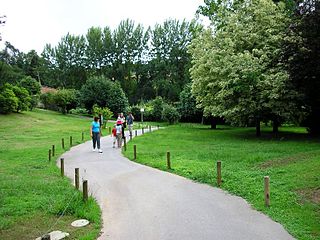 The Bridge of Prozelo is a bridge in the civil parish of Ferreiros, Prozelo e Besteiros, municipality of Amares, in the Portuguese district of Braga, that crosses the Cávado River.

The Bridge of Prado is a bridge constructed over the Cávado River, in the civil parish of Vila de Prado, municipality of Vila Verde, in Norte Region, Portugal northern Portugal. Although originally a Roman bridge, it was re-constructed during the 16th century when the original had been destroyed following flooding and consistent use. There are few vestiges of the Roman bridge.

The Road-rail bridge of Pocinho, commonly known as Pocinho Bridge, is a road-rail bridge in Vila Nova de Foz Côa, Portugal. The structure was part of the now defunct rail network Sabor line, and is now closed to both types of transit. 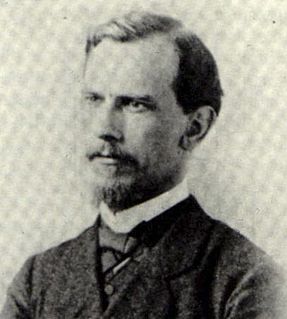 The Portuguese Way is the name of the Camino de Santiago pilgrimage routes starting in Portugal. It begins at Porto or Lisbon. From Porto, along the Douro River, pilgrims travel north crossing the five main rivers—the Ave, Cávado, Neiva, Lima and Minho—before entering Spain and passing through Padrón on the way to Santiago de Compostela.

The following is a timeline of the history of the city of Porto, Portugal.

The Monastery of Serra do Pilar is a former monastery located in Vila Nova de Gaia, Portugal, on the opposite side of the Douro River from Porto. The monastery is situated on an outcrop overlooking the Dom Luís I Bridge and the historic centre of Porto. Together with these locations, the monastery was designated a UNESCO World Heritage Site in 1996. The monastery is notable for its church and cloister, both of which are circular.