Pire was born in Dinant, Belgium. He was the eldest child of four born to Georges Pire, Sr., a civic official, and Berthe (Ravet) Pire. [2] 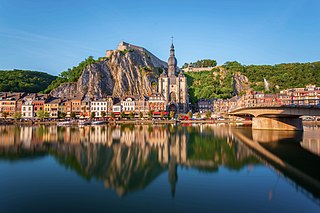 At the outbreak of the First World War in 1914 Pire's family fled from Belgium to France in a boat to escape advancing German troops. After the armistice of 1918 the family was able to return to Dinant, which had been reduced to ruins. [3]

Pire studied Classics and Philosophy at the Collège de Bellevue and at the age of eighteen entered the Dominican priory of La Sarte in Huy. He took his final vows on 23 September 1932, adopting the name Dominique, after the Order's founder. He then studied theology and social science at the Pontifical International Institute Angelicum, the future Pontifical University of Saint Thomas Aquinas, Angelicum in Rome, where he obtained his doctorate in theology in 1936 with a thesis entitled L’Apatheia ou insensibilité irréalisable et destructrice (Apatheia or unrealisable and destructive insensitivity). [4] He then returned to the Studium of La Sarte where he taught sociology.

Huy is a municipality of Belgium. It lies in the country's Walloon Region and Liège Province. Huy lies along the river Meuse, at the mouth of the small river Hoyoux. It is in the sillon industriel, the former industrial backbone of Wallonia, home to about two-thirds of the Walloon population. The Huy municipality includes the sub-municipalities of Ben-Ahin, Neuville-sous-Huy, and Tihange. 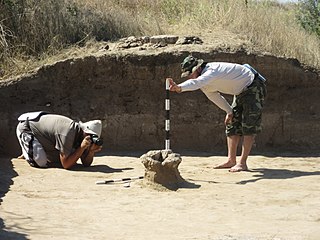 Social science is a category of academic disciplines concerned with society and the relationships among individuals within a society. The disciplines include, but are not limited to: anthropology, archaeology, communication studies, economics, history, musicology, human geography, jurisprudence, linguistics, political science, psychology, public health, and sociology. The term is also sometimes used to refer specifically to the field of sociology, the original "science of society", established in the 19th century. For a more detailed list of sub-disciplines within the social sciences see: Outline of social science.

After completing his studies Pire returned to the priory at La Sarte, in Huy, Belgium where he dedicated himself to helping poor families live according to their dignity. During the second world war, Pire served as chaplain to the Belgian resistance, actively participating in its activities, such as helping smuggle Allied pilots out of the country. He received several medals for this service after the war.

Dignity is the right of a person to be valued and respected for their own sake, and to be treated ethically. It is of significance in morality, ethics, law and politics as an extension of the Enlightenment-era concepts of inherent, inalienable rights. The term may also be used to describe personal conduct, as in "behaving with dignity".

In 1949, he began studying issues relating to postwar refugees (Displaced Persons [DP]) and wrote a book about them, entitled Du Rhin au Danube avec 60,000 D. P.. He founded an organisation to help them. The organisation established sponsorships for refugee families, and during the 1950s built a number of villages in Austria and Germany to help house many refugees. Although a Dominican friar, Dominique Pire always refused to mix his personal faith with his commitments on behalf of the disadvantaged, a decision that was not always understood by his religious superiors.

After winning the Peace Prize, Pire also helped found a "Peace University" to raise global understanding. Later convinced that peace would not be achievable without the eradication of poverty, he founded "Islands of Peace", an NGO dedicated to the long term development of rural populations in developing countries. Projects were started in Bangladesh and India.

He died at Louvain Roman Catholic Hospital on January 30, 1969, from complications following surgery.

More than 30 years after his death, the four organizations he founded are still active. In 2008 a program was established in honour of his work at the Las Casas Institute at Blackfriars Hall, University of Oxford. [5]

Blackfriars, Oxford is a Permanent Private Hall of the University of Oxford. Blackfriars houses three distinct institutions: the Priory of the Holy Spirit, the religious house of the friars, whose current prior is Robert Gay; Blackfriars Studium, the centre of theological studies of the English Province of the Dominican Friars ; and Blackfriars Hall, one of the constituent educational institutions of the University of Oxford. The current Regent of both the hall and studium is Simon Gaine. The name Blackfriars is commonly used to denote a house of the Dominican Friars in England, a reference to the black-colored "cappa", which is part of their habit.

Martin de Porres Velázquez, O.P., was a Peruvian lay brother of the Dominican Order who was beatified in 1837 by Pope Gregory XVI and canonized in 1962 by Pope John XXIII. He is the patron saint of mixed-race people, barbers, innkeepers, public health workers, and all those seeking racial harmony.

Timothy Peter Joseph Radcliffe, OP is a Roman Catholic priest and Dominican friar of the English Province, and former Master of the Order of Preachers from 1992 to 2001. He is the only member of the English Province of the Dominicans to have held the office since the Order's foundation in 1216. He is formerly the Director of the Las Casas Institute of Blackfriars, Oxford which focuses on the promotion of Social Justice and Human Rights.

The Pontifical University of Saint Thomas Aquinas (PUST), also known as the Angelicum in honor of its patron the Doctor Angelicus Thomas Aquinas, is located in the historic center of Rome, Italy. It is directly dependent on the Pope for its status as a pontifical university as outlined in the apostolic constitution Sapientia Christiana, which also clarifies the parameters of Church authority and academic freedom. The Angelicum is administered by the Catholic Order of Preachers, also known as the Dominican Order, and is a central locus of traditional Dominican Thomist theology and philosophy.

Marie-Dominique Chenu was a progressive Roman Catholic theologian and one of the founders of the reformist journal Concilium.

Michael Browne, O.P. was an Irish priest of the Dominican Order and a Cardinal of the Roman Catholic Church. He served as Master General of the Dominicans from 1955 to 1962, and was elevated to the cardinalate in 1962.

Carlos Alfonso Azpiroz Costa, O.P., J.C.D. is an Argentinian friar of the Order of Preachers, better known as the Dominicans, who serves as a prelate of the Catholic Church.

Jean Jérôme Hamer, O.P., S.T.D. was a Belgian Cardinal who was Prefect of the Congregation for Institutes of Consecrated Life and Societies of Apostolic Life from 1985 until 1992. 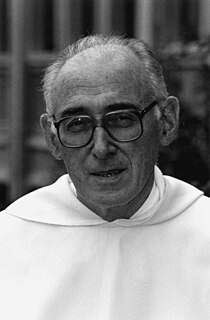 Hyacinthe-Marie Cormier, O.P. was a French Dominican friar and priest, who served as the 76th Master of his Order from 1904 until 1916. He was beatified by Pope John Paul II on 20 November 1994.

José Raúl Vera López is a Mexican friar of the Dominican Order and since 2000 bishop of the Roman Catholic Diocese of Saltillo. He is known as well for his struggle for human rights and social justice.

Bede Jarrett OP was an English Dominican friar and Catholic priest who was also a noted historian and author. Known for works including Mediæval Socialism and The Emperor Charles IV, Jarrett also founded Blackfriars Priory at the University of Oxford in 1921, formally reinstating the Dominican Order at that university for the first time since the Dissolution of the Monasteries under King Henry VIII.

Islands of Peace is a Belgian non-governmental organization which works for development. It was founded by Dominique Pire, a Belgian Dominican who won the Nobel Peace Prize in 1958. Its head office is located in Huy, Belgium.