Dominique Visse (born 30 August 1955) is a French countertenor and founder of the Ensemble Clément Janequin.

Dominique Visse was a chorister at the Notre-Dame de Paris and studied organ and flute at the Versailles Conservatory. As a musician, he developed an interest in Medieval and Renaissance repertories. After studying with Alfred Deller and René Jacobs from 1976 to 1978, he made his opera debut at Tourcoing in Monteverdi's L'incoronazione di Poppea in 1982. [1]

Visse devotes himself to performing of secular and religious music of the Renaissance. He is also known for his interpretations of the Parisian chansons. [2] 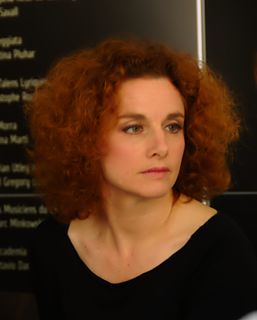 Emmanuelle Haïm is a French harpsichordist and conductor with a particular interest in early music and Baroque music.

Éric Bellocq is a French lutenist.

The Ensemble Clément Janequin is a French early music ensemble founded in 1978 and specializing in the chansons of the Renaissance and early Baroque.

Pascal Bertin is a French countertenor.

David Hansen is an Australian countertenor.

Concerto Vocale is a Belgian musical ensemble for baroque music.

François Fauché is a French soloist singer specializing in baroque repertoire for bass.

Antoine Sicot is a contemporary French soloist singer specialising in the baroque repertoire for bass voice.

Bruno Boterf is a contemporary French tenor, specialising in Baroque and early music.