Don't Be a Menace to South Central While Drinking Your Juice in the Hood (or simply Don't be a Menace) is a 1996 American crime-comedy film directed by Paris Barclay in his feature film directorial debut, and produced by Keenen Ivory Wayans. It stars the Wayans brothers Shawn and Marlon Wayans, who were also both writers with Phil Beauman. The film was released in the United States on January 12, 1996.

Similar to I'm Gonna Git You Sucka , the film spoofs a number of African-American, coming-of-age, hood films such as Juice , Jungle Fever , South Central , Higher Learning , Do the Right Thing , Poetic Justice , New Jack City , Dead Presidents , Friday , Above the Rim , and most prominently Boyz n the Hood and Menace II Society . The film's title borrows phrases from some of those films, and some of the actors who starred in those movies appear in the film, in some cases appearing in similar roles or scenes as the films being parodied.

Ashtray, Tray for short, is sent to the inner city to live with his father. Tray gets an education about life on the streets from his psychotic, gun-toting cousin Loc Dog, pot-smoking foul-mouthed Grandma, underage Pops, and gang members Preach and Crazy Legs. At a picnic, Tray falls for the infamous Dashiki, who has seven kids, much to the distaste of ex-convict Toothpick, who happens to be her ex boyfriend. When Ashtray and Loc Dog head out to buy some snacks, Toothpick and his crew, Al Dog & Sam, confront Ashtray and hold him at gunpoint until Loc Dog threatens them with a missile mounted in the back of his truck, whereupon Toothpick and his gang flee the scene.

Loc Dog and Ashtray are harassed in a Korean store by the owners, and Loc Dog shoots at them when they make a remark about his mother. The two are then confronted by "The Man" (a mysterious white government figure), who kills the Koreans and tosses them his gun to frame them and leaves.

Meanwhile, Ashtray and Loc Dog's Grandma ride to church and another elderly woman disses her, resulting in a breakdancing contest that Grandma wins.

Ashtray visits Dashiki where they engage in sexual intercourse and Dashiki immediately claims he has impregnated her. Feeling like he's not responsible enough to be the father, Dashiki kicks him out. Meanwhile, Sam confronts Ashtray, Loc Dog, Preach, and Crazy Legs about Ashtray impregnating Dashiki. Loc Dog knocks him out as he, Ashtray and Preach proceed to punch & stomp him, flattening him (literally). The quartet decides to get protection from their friend Old School, who advises them to protect themselves and watch out for each other, until his mother walks out and tells him to clean his bedroom.

Moments later, Toothpick performs a drive-by shooting in revenge for Sam’s beating and Crazy Legs is injured. With Crazy Legs hospitalized, Tray decides to confront Dashiki and become a father to their newborn baby. Dashiki agrees to give Tray another chance and they decide to leave the ‘hood as planned.

Ashtray then reads a bedtime story to his Pops (who is too young to go to a party) which causes him to ejaculate before going to sleep. At the party, Loc Dog meets Keisha, whom he then takes to his mail truck for drinks and sex, during which Keisha turns into a demonic monster and attacks Loc Dog, stripping him naked while he tries to run away screaming.

Ashtray and Loc Dog talk about Ashtray's departure as Toothpick and his gang prepare for another drive-by shooting. He and Loc Dog clash, and Ashtray is shot. As Loc Dog and Toothpick's gang continue to exchange gunfire, Grandma pops out of the dumpster and shoots at Toothpick's car, hitting Al Dog and flattening a tire, causing Toothpick to be flung from the car, landing on a cop car. Preach and Dashiki find Ashtray hurt, and he regains consciousness and kisses Dashiki. A woman finds Toothpick (she turns out to be his mother) and beats him with his shoe for stealing from her in the past. Afterwards, Toothpick and his gang are presumably arrested.

Afterwards, everyone goes their separate ways: Ashtray and Dashiki marry and enjoy their lives, Loc Dog becomes a host and introduces himself with extreme profanity, Preach and his crush settle down together, Crazy Legs becomes a dancer as he had always dreamed, and Grandma is, as Ashtray puts it, "still Grandma" (showing her smoking cannabis).

Main article: Don't Be a Menace to South Central While Drinking Your Juice in the Hood (soundtrack)

The soundtrack album was released on January 9, 1996 via Island Records, and consisted of hip hop and R&B music. The album peaked at number 18 on the Billboard 200, number 3 on the Top R&B/Hip-Hop Albums, and was certified Gold by the Recording Industry Association of America on March 14, 1996 for selling 500,000 copies in the United States.

It spawned five singles: The Island Inspirational All-Stars' gospel song "Don't Give Up", the Lost Boyz' "Renee" and "Can't Be Wasting My Time", Joe's "All the Things (Your Man Won't Do)", and The Isley Brothers' "Let's Lay Together". 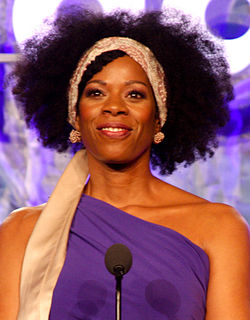 Kim Nichole Wayans is an American actress, activist, comedian, producer, writer and director. Wayans is the sister of Keenen Ivory, Damon Sr., Marlon, Shawn and Nadia Wayans. She is best known for her numerous roles on the Fox sketch comedy show In Living Color (1990–94), and Tonia Harris on In the House (1995–98). Wayans is also best known as the noted family matriarch of The Wayans Family. 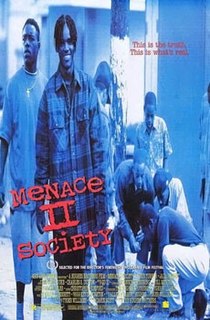 Menace II Society is a 1993 American teen hood drama film directed by Allen and Albert Hughes in their film directorial debut. It stars Tyrin Turner, Jada Pinkett, Monica Calhoun and Larenz Tate. The film is set in Watts, Los Angeles, and follows the life of a young man named Kaydee "Caine" Lawson and his close friends. The film is notable for featuring breakout roles for Tyrin Turner, Jada Pinkett, Larenz Tate and Monica Calhoun. It gained notoriety for its scenes of violence, profanity and drug-related content. It also received critical acclaim for the performances of Tyrin Turner and Larenz Tate, the direction, and its realistic portrayal of urban violence and powerful underlying messages.

Antonio Juan Fargas is an American actor known for his roles in 1970s blaxploitation and comedy movies, as well as his portrayal as Huggy Bear in the 1970s TV series Starsky & Hutch.

Lexie Donnell Bigham Jr. was an American film and television actor. Bigham appeared in numerous independent films and television series. His prominent roles came in the films Se7en, Boyz n the Hood, South Central, Dave, Drop Zone, Airheads, Up Close & Personal, Don't Be a Menace to South Central While Drinking Your Juice in the Hood, and High School High. Bigham died in a car accident in Los Angeles on December 17, 1995 at the age of 27, shortly after filming High School High.

Future Rhythm is the fourth album from rap group, Digital Underground, and also marks their first independent release. The album spawned two songs that were featured in the Wayans brother's film Don't Be a Menace to South Central While Drinking Your Juice in the Hood; "Food Fight", which showcases Humpty Hump and Del tha Funkee Homosapien trading verses, and "We Got More" with the Luniz, which is also featured on the films' soundtrack. The album also boasts an early performance from rapper Sly Boogy while still a member of the Black Spooks.

The Sandwich EP is the debut EP recorded by the Stoke-based ska punk band Grown at Home. It was produced and mixed by Iain Wetherell. The EP received positive reviews, and the song "Don't Be a Menace to King Kong While Drinking Banana Juice in The Congo" was broadcast on BBC Radio 1's "The Lock Up" with Mike Davies.

Hood film is a film genre originating in the United States, which features aspects of urban African American or Hispanic American culture.

Kimberly Leadbetter, better known by her professional stage name Mona Lisa, is an American pop and R&B singer-songwriter, actress, model and record producer. She is best known for her debut single "Can't Be Wasting My Time" featuring the hip hop group Lost Boyz, which was featured on the Don't Be a Menace to South Central While Drinking Your Juice in the Hood soundtrack, as well as her debut album 11-20-79.

Chris Spencer is an American actor, comedian, writer, and producer. He was the first host of the syndicated late night talk show Vibe, based on the magazine of the same name. He has gone on to star in several film projects such as Don't Be A Menace To South Central While Drinking Your Juice In The Hood, The Sixth Man, Significant Others, and Postal. Chris is also one of the most sought after writers having done projects with Wayans family, Jamie Foxx, and was significant in helping Nick Cannon create MTV's Wild 'N Out. Chris Spencer also travels the country as a standup comedian and has performed on The Chris Rock Show, Jimmy Kimmel Live! and HBO's Def Comedy Jam. Chris and fellow friends, Al Madrigal and Maz Jobrani are on a weekly podcast, Minivan Men. He is a writer for the scripted comedy, Real Husbands of Hollywood. In 2017, he co-created a TV series White Famous.

Lloyd Fernandez Avery II was an American actor. He was best known for his character in John Singleton's Oscar-nominated film Boyz n the Hood (1991), as the triggerman who murdered high school football star Ricky Baker and was later killed in retaliation. In 2005, Avery was convicted of double homicide, and later killed in prison by his cellmate. 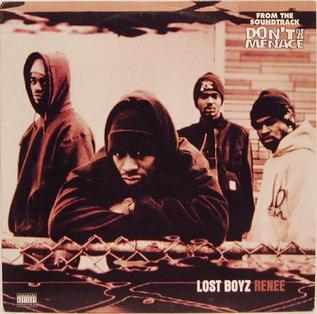 "Renee" is a song by rap group Lost Boyz from their first studio album Legal Drug Money and the Don't Be a Menace to South Central While Drinking Your Juice in the Hood soundtrack. It samples the Janet Jackson song "Funny How Time Flies ". It was the Lost Boyz' most successful single, reaching number 33 on the Billboard Hot 100 and earning a gold certification from the RIAA for sales of 500,000 copies.

"All the Things " is a song by American Contemporary R&B singer Joe. It was written by Joe, Joshua Thompson, and Michele Williams and produced by Joe and Thompson. The song originally appeared on the soundtrack to the film Don't Be a Menace to South Central While Drinking Your Juice in the Hood and was later included as the opening track on his second studio album All That I Am (1997). It was his first hit on the US Billboard Hot 100, peaking at number 11 in 1996. The single was certified gold by the Recording Industry Association of America (RIAA) on April 10, 1996.