Don Dailey (March 10, 1956 – November 22, 2013) was an American longtime researcher in computer chess and a game programmer. Along with collaborator Larry Kaufman, he was the author of the chess engine Komodo. Dailey started chess programming in the 1980s, and was the author and co-author of multiple commercial as well as academic chess programs. He has been an active poster in computer chess forums and computer Go newsgroups. [1] He was raised as a Jehovah's Witness and served in recent years as an elder in the church of Roanoke. [2]

In October 2013, Dailey announced the release of Komodo 6, but also news concerning the future status of Komodo due to his fatal illness of an acute form of leukemia, [3] and introduced Mark Lefler as new member of the Komodo team. [4] Dailey died of leukemia at the age of 57 on November 22, 2013. [5]

In the early 1990s, Dailey started to work with chess master and computer chess programmer Julio Kaplan within his company Heuristic Software. The program they developed was called Heuristic Alpha, which later evolved into Socrates, Socrates II and the mass market entry Kasparov's Gambit. [8]

At the ACM 1993 computer chess tournament, which was won by Dailey's program Socrates II on an IBM PC ahead of Cray Blitz, he met Bradley Kuszmaul and Charles Leiserson from MIT competing with StarTech, and they asked him to help develop a new parallel chess program. Some time later when Heuristic went out of business, he began working part-time for Leiserson at the lab at MIT on the new parallel program Star Socrates, [9] beside his duty as official systems administrator. Star Socrates played a strong World Computer Chess Championship 1995 in Shatin, Hong Kong, finally losing the playoff versus Fritz. [10] Dailey continued his cooperation with Charles Leiserson on the massively parallel chess program Cilkchess, written in Cilk. [11] [12]

After a break from computer chess and a few years focusing on other domains, Dailey's 2009/2010 chess program Doch as well as its successor Komodo [14] are again a joint effort in collaboration with Larry Kaufman. [15] In Fall 2013, the developmental version of Komodo won stage 3, [16] and already after Don's death, the final of the Thoresen Chess Engines Competition, the latter in a 48-game match versus stage 4 winner Stockfish by a margin of 25–23. [17] Finalist Stockfish DD, dedicated to Don Dailey, was officially released during the final, [18] the commercial Komodo-TCEC a few days later. [19] [20] 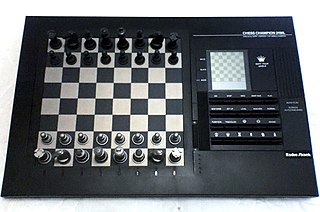 Junior is a computer chess program written by the Israeli programmers Amir Ban and Shay Bushinsky. Grandmaster Boris Alterman assisted, in particular with the opening book. Junior can take advantage of multiple processors, taking the name Deep Junior when competing this way in tournaments.

ChessBase GmbH is a German company that makes and sells chess software, maintains a chess news site, and operates internet chess server for online chess. Founded in 1986, it maintains and sells massive databases, containing the moves of recorded chess games. Databases organise data from prior games; engines provide analyses of games while endgame tablebases offer perfect play in some endgames. 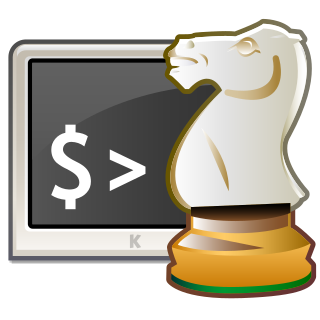 In computer chess, a chess engine is a computer program that analyzes chess or chess variant positions, and generates a move or list of moves that it regards as strongest. A chess engine is usually a back end with a command-line interface with no graphics or windowing. Engines are usually used with a front end, a windowed graphical user interface such as Chessbase or WinBoard that the user can interact with via a keyboard, mouse or touchscreen. This allows the user to play against multiple engines without learning a new user interface for each, and allows different engines to play against each other. Over the last years, there are chess engines available for mobile phones and tablets, which makes their usage easier. The list includes chess engines like Stockfish, Komodo, Texel, Bagatur and many others. 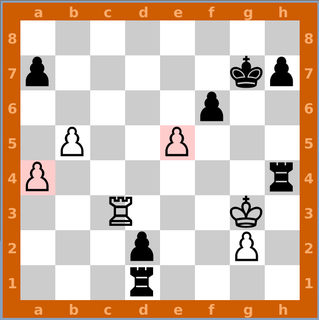 Crafty is a chess program written by UAB professor Dr. Robert Hyatt, with continual development and assistance from Michael Byrne, Tracy Riegle, and Peter Skinner. It is directly derived from Cray Blitz, winner of the 1983 and 1986 World Computer Chess Championships. Tord Romstad, the author of Stockfish, described Crafty as "arguably the most important and influential chess program ever".

David Neil Laurence Levy is an English International Master of chess and a businessman. He is noted for his involvement with computer chess and artificial intelligence, and as the founder of the Computer Olympiads and the Mind Sports Olympiads. He has written more than 40 books on chess and computers.

World Computer Chess Championship (WCCC) is an event held periodically since 1974 where computer chess engines compete against each other. The event is organized by the International Computer Games Association. It is often held in conjunction with the Computer Olympiad, a collection of computer tournaments for other board games.

Socrates II is a chess program that, in 1993, won the 23rd North American Computer Chess Championship. It ran on an IBM PC. This was the first and only time that a stock microcomputer won this event, finishing ahead of past winners Cray Blitz and HiTech. The authors, Don Dailey and Larry Kaufman, renewed their collaboration twenty years later to create the Komodo chess engine.

Stockfish is a free and open-source chess engine, available for various desktop and mobile platforms. It is developed by Marco Costalba, Joona Kiiski, Gary Linscott, Stéphane Nicolet, Stefan Geschwentner, Joost VandeVondele, and Tord Romstad, with many contributions from a community of open-source developers.

Houdini is a UCI chess engine developed by Belgian programmer Robert Houdart. It is influenced by open-source engines IPPOLIT/RobboLito, Stockfish, and Crafty. Earlier versions are free for non-commercial use, but later versions are commercial. As of October 2019, Houdini 6 is the fourth highest-rated chess engine on major chess engine rating lists, behind Stockfish, Leela Chess Zero and Komodo.

Komodo is a UCI chess engine developed by Don Dailey and Mark Lefler, and supported by chess author and evaluation expert GM Larry Kaufman. Komodo is a commercial chess engine but older versions are free for non-commercial use. It is consistently ranked near the top of most major chess engine rating lists, along with Stockfish and Leela Chess Zero.

Kasparov's Gambit, or simply Gambit, is a chess playing computer program created by Heuristic Software and published by Electronic Arts in 1993 based on Socrates II, the only winner of the North American Computer Chess Championship running on a common microcomputer. It was designed for MS-DOS while Garry Kasparov reigned as world champion, whose involvement and support was its key allure.

Top Chess Engine Championship, formerly known as Thoresen Chess Engines Competition, is a computer chess tournament that has been run since 2010. It was organized, directed, and hosted by Martin Thoresen until the end of Season 6; from Season 7 onward it has been organized by Chessdom. It is often regarded as the Unofficial World Computer Chess Championship because of its strong participant line-up and long time-control matches on high-end hardware, giving rise to very high-class chess.

AlphaZero is a computer program developed by artificial intelligence research company DeepMind to master the games of chess, shogi and go. This algorithm uses an approach similar to AlphaGo Zero.

Leela Chess Zero is a free, open-source, and neural network-based chess engine and distributed computing project. Development has been spearheaded by programmer Gary Linscott, who is also a developer for the Stockfish chess engine. Leela Chess Zero was adapted from the Leela Zero Go engine, which in turn was based on Google's AlphaGo Zero project, also to verify the methods in the AlphaZero paper as applied to the game of chess.