Donald Hugh Harron, was a Canadian comedian, actor, director, journalist, author, playwright, and composer. Harron is best remembered by American audiences as a member of the cast of the long-running country music series Hee Haw, on which he played his signature character of Charlie Farquharson.

Great Britain, represented by the British Olympic Association (BOA), competed at the 1952 Summer Olympics in Helsinki, Finland. 257 competitors, 213 men and 44 women, took part in 127 events in 18 sports. In 1952, they achieved their only gold medal during the last event of the last day of competition in Helsinki. Along with 1904 and 1996, this is Great Britain's lowest gold medal count. 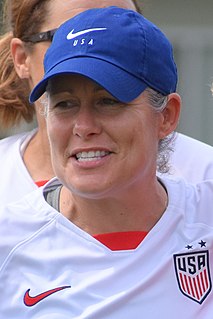 Shannon Ann MacMillan is an American retired soccer player, coach, FIFA Women's World Cup champion, Olympic gold and silver medalist. Named U.S. Soccer Athlete of the Year for 2002, MacMillan played for the United States women's national soccer team from 1994 to 2006 and was part of the 1999 FIFA Women's World Cup-winning team. She won gold with the team at the 1996 Summer Olympics and silver at the 2000 Summer Olympics.

Robert Lea MacMillan is a Canadian former professional ice hockey forward and a former politician who served in the Legislative Assembly of Prince Edward Island. During his hockey career, he played two seasons in the World Hockey Association (WHA), followed by eleven seasons in the National Hockey League (NHL), from 1974–75 until 1984–85.

Warwick B. Smith is a Scottish curler from Bridge of Earn, Perth and Kinross.

David MacMillan was an American basketball coach. He was a longtime head coach at the University of Minnesota, and briefly coached the NBA's Tri-Cities Blackhawks in 1950, succeeding Red Auerbach.

Ewan MacDonald is a Scottish curler. Representing Scotland, he is a three-time World Champion, playing second for Hammy McMillan in 1999 and playing third for David Murdoch in 2006 and 2009. He has also represented Great Britain at three Winter Olympics, in Salt Lake City 2002, Torino 2006 and Vancouver 2010.

William Stewart MacMillan is a Canadian former hockey coach and player. MacMillan played and later coached in the National Hockey League (NHL). After several years with the Canadian national team, including playing at two World Championships and the 1968 Winter Olympics, winning a bronze medal, MacMillan made his NHL debut in 1970 with the Toronto Maple Leafs. He played for Toronto, the Atlanta Flames, and New York Islanders between 1970 and 1977, and retired from playing in 1978. He became a coach during his final year, spent in the minor CHL and moved to the NHL in 1979 when he became an assistant coach for the Islanders. He was named the head coach of the Colorado Rockies in 1980, also serving as general manager the next season. MacMillan stayed with the team as they relocated in 1982 to become the New Jersey Devils, and was let go early in the 1983–84 season. Billy is the brother of Bob MacMillan. 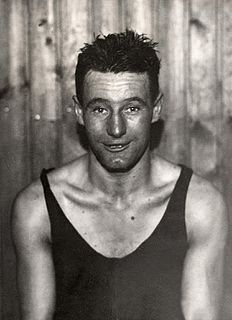 Edward Morgan, generally known as Ted Morgan, was a New Zealand boxer. He won the gold medal in the welterweight division at the 1928 Summer Olympics, despite competing throughout the tournament with a dislocated knuckle in his left hand. This was the first gold medal won for an athlete representing New Zealand. 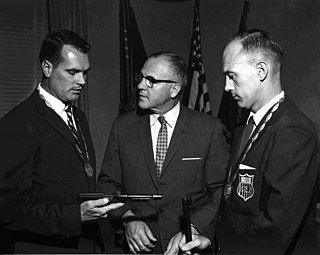 William Willard McMillan was a world-class American sports shooter. Competing in ISSF 25 meter rapid fire pistol, he won an Olympic gold medal in 1960, was part of the American winning team at the 1952 World Championships, and won several gold and silver medals at the Pan American Games between 1955 and 1979.

Hamilton "Hammy" McMillan is a Scottish curler and world champion. He won a gold medal as skip for the Scottish team at the 1999 Ford World Curling Championships in Saint John, New Brunswick. He has received five gold medals at the European Curling Championships. He played third for the Tom Brewster rink before forming his own team.

Donald Alexander Sheff is an American former competition swimmer who represented the United States at the 1952 Summer Olympics in Helsinki. He competed for the gold medal-winning U.S. team in the preliminary heats of the men's 4×200-meter freestyle relay. Sheff did not receive a medal, however, because under the 1952 Olympic swimming rules, relay swimmers who did not compete in the event final were not medal-eligible.

Glen Vincent Dexter is a Canadian former sailor who competed in the 1976 Summer Olympics. He was a member of the youngest Olympic sailing crew at the 1976 Olympics, with fellow sailors Andreas Josenhans and Sandy MacMillan. The team placed 8th. The team went on to become the World Class Soling Champions in 1977 and 1980.

Sandy MacMillan is a Canadian former sailor who competed in the 1976 Summer Olympics. He was a member of the youngest Olympic sailing crew at the 1976 Olympics, with fellow sailors Andreas Josenhans and Glen Dexter. The team placed 8th. The team went on to become the World Class Soling Champions in 1977 and 1980.

Andreas Josenhans is a German-born Canadian sailor who competed in the 1976 Summer Olympics.

John Roderick Alexander MacMillan is a British rower. He competed in the men's double sculls event at the 1952 Summer Olympics.