Last updated November 30, 2019
This article is about the American writer. For the British writer, see Donald G. Payne.

William Donald "Don" Payne (May 5, 1964 – March 26, 2013) was an American writer and producer. He wrote several episodes of The Simpsons after 2000, many of these with John Frink, whom he met while studying at the University of California, Los Angeles. The duo began their careers writing for the short-lived sitcom Hope and Gloria . Payne later moved into writing feature films, including My Super Ex-Girlfriend (2006), and co-wrote Fantastic Four: Rise of the Silver Surfer (2007), Thor (2011) and its sequel Thor: The Dark World (2013). Payne died from bone cancer in March 2013.

Payne was born William Donald Payne on May 5, 1964 in Wilmington, North Carolina, United States. [1] [2] [3] He attended New Hanover High School, graduating in 1982; he had been class president. [4] He attended the University of North Carolina at Chapel Hill, [4] then transferred to and graduated from the University of California, Los Angeles, where he also received a master's degree in screenwriting. [5] Payne later taught the course. [6]

He began his career as a writer for several sitcoms together with his writing partner at the time, John Frink. [7] [8] The two met at UCLA, where Frink was the boss of the Media Laboratory in which Payne worked. Payne has said to the website TheFutonCritic.com that "one day we were both trying to write individually so I said, 'why don't we pool our resources and write together and see what happens?'" [9] In 2006, Payne told the Los Angeles Times that "I hooked up with a writing partner, John Frink, out of college. I wanted to do films. He wanted to do television." [7] The pair reached the agreement that they would pursue a career in the medium that they first got a job offer in—whether it be film or television. They eventually ended up writing for television sitcoms such as Hope and Gloria (1995–1996), Men Behaving Badly (1997) and The Brian Benben Show (1998). [7] These sitcoms were short-lived and Payne has deemed them as failures. [8]

Payne and Frink joined the writing staff of the animated sitcom The Simpsons in 1998; their first script was the season twelve episode "Insane Clown Poppy", which aired in 2000. [5] [8] "Treehouse of Horror XI", another 2000 episode they wrote, was broadcast earlier than "Insane Clown Poppy", but was produced after. [8] Payne said in an interview with TV Squad in 2006 that "My partner and I were actually working on one of a long string of failed sitcoms (and most sitcoms are failed sitcoms!) On the day a show is officially cancelled, it's kind of a tradition for the writing staff to go out to a restaurant, eat a nice meal, and drown their sorrows. On the way there, a writer named Jace Richdale (who had also worked on The Simpsons) told my partner and me that The Simpsons was looking for some writers. He wanted to know if we'd be interested in it, because he would recommend us. My jaw literally dropped. So he contacted the show-runner, a guy named Mike Scully, who read our spec script and met with us, then hired us on." [8]

After a few years of working on The Simpsons together, Frink and Payne's writing partnership ended. [7] [8] They both continued to work on the show individually and Payne has described their split-up as amicable. [9] Payne shared (with the show's other producers) four Primetime Emmy Awards for Outstanding Animated Program for his work on The Simpsons and won the Paul Selvin Award from the Writers Guild of America for writing the 2005 episode "Fraudcast News". [10] He and Frink had been nominated for a WGA Award for Animation in 2003, for the episode "The Bart Wants What It Wants". [11] Payne wrote or co-wrote 16 episodes of the show and worked as a producer on over 100; [12] he wrote two final episodes, "White Christmas Blues" and "Labor Pains", which aired posthumously. [1] [10]

Payne later moved into writing feature films, as he had earlier desired, though continued to work on The Simpsons twice a week as a consulting producer. [5] [10] He wrote My Super Ex-Girlfriend (2006), and co-wrote Fantastic Four: Rise of the Silver Surfer (2007), Thor (2011) and Thor: The Dark World (2013). [5] [13] [14] He was also attached to write Maximum Ride in 2013. [14] My Super Ex-Girlfriend was released in 2006 and was his first feature film. [8] He said in an interview with the website Cinematical that "I've always wanted to write features. That's why I moved to Los Angeles in the first place. I started writing with John Frink when I was in college at UCLA. He wanted to do TV, and that's where we got our first break. But my goal was always to write movies. And I've been a comic book geek from way back. So this romantic comedy with a superhero twist was a fitting first feature for me." [15]

The movie Thor: The Dark World , which he co-wrote, is dedicated to his memory, as is his final episode of The Simpsons, "White Christmas Blues".

Professor John I.Q. Nerdelbaum Frink Jr., or simply Professor Frink, is a recurring character in the animated television series The Simpsons. He is voiced by Hank Azaria, and first appeared in the 1991 episode "Old Money". Frink is Springfield's nerdy scientist and professor and is extremely intelligent, though somewhat mad and socially inept. Frink often tries to use his bizarre inventions to aid the town in its crises but they usually only make things worse. His manner of speech, including the impulsive shouting of nonsensical words, has become his trademark.

David Mirkin is an American feature film and television director, writer and producer. Mirkin grew up in Philadelphia and intended to become an electrical engineer, but abandoned this career path in favor of studying film at Loyola Marymount University. After graduating, he became a stand-up comedian, and then moved into television writing. He wrote for the sitcoms Three's Company, It's Garry Shandling's Show and The Larry Sanders Show and served as showrunner on the series Newhart. After an unsuccessful attempt to remake the British series The Young Ones, Mirkin created Get a Life in 1990. The series starred comedian Chris Elliott and ran for two seasons, despite a lack of support from many Fox network executives, who disliked the show's dark and surreal humor. He moved on to create the sketch show The Edge starring his then-partner, actress Julie Brown.

"Treehouse of Horror XI" is the first episode of The Simpsons' twelfth season and the 249th overall, and the eleventh Halloween episode. The episode features "G-G-Ghost D-D-Dad", "Scary Tales Can Come True" and "Night of the Dolphin" and was written by Rob LaZebnik, John Frink and Don Payne and Carolyn Omine and directed by Matthew Nastuk. 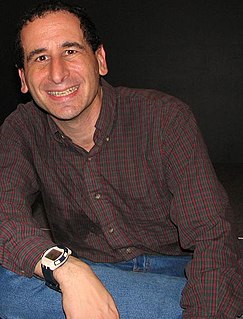 "The Bart Wants What it Wants" is the eleventh episode of The Simpsons' thirteenth season. It first aired on the Fox network in the United States on February 17, 2002. In the episode, Bart befriends Rainier Wolfcastle's daughter, Greta. While Greta falls in love with him, Bart only accompanies her because she owns a lot of entertaining things.

"Tennis the Menace" is the twelfth episode of the twelfth season of the American animated sitcom The Simpsons. It originally aired on the Fox network in the United States on February 11, 2001. In the episode, the Simpsons build a tennis court in their backyard and are ridiculed by the entire town because of Homer's inferior tennis ability. Homer therefore tries to please Marge by entering the two into a tournament, but they quickly turn into rivals when Marge replaces Homer with Bart as her partner.

"Bye Bye Nerdie" is the sixteenth episode of the twelfth season of the American animated sitcom The Simpsons. It originally aired on the Fox network in the United States on March 11, 2001. In the episode, after Lisa becomes the target of a female bully named Francine, she discovers a scientific reason as to why bullies pick on nerds and demonstrates her findings at a science conference. Meanwhile, Homer goes into the childproofing business, causing baby-injury-related businesses to go in decline.

"Simpsons Tall Tales" is the twenty-first episode and season finale of The Simpsons' twelfth season. It originally aired on the Fox network in the United States on May 20, 2001. In the episode, Homer refuses to pay a five dollar airport tax to fly to Delaware, which forces the family to ride in a livestock car of a train instead. There they meet a singing hobo who tells three tall tales which include Homer as Paul Bunyan, Lisa as Connie Appleseed and Bart and Nelson as Tom Sawyer and Huckleberry Finn respectively. 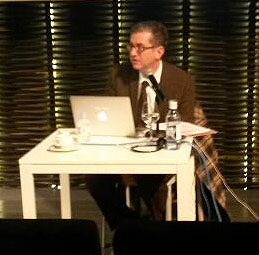 "The Simpsons Spin-Off Showcase" is the twenty-fourth episode of the eighth season of The Simpsons. It originally aired on the Fox network in the United States on May 11, 1997. The episode centers on fictional pilot episodes of non-existent television series derived from The Simpsons, and is a parody of the tendency of networks to spin off characters from a hit series. As such it includes references to many different TV series. The first fictional spin-off is Chief Wiggum P.I., a cop-dramedy featuring Chief Wiggum and Seymour Skinner. The second is The Love-matic Grampa, a sitcom featuring Moe Szyslak who receives dating advice from Abraham Simpson, whose ghost is possessing a love testing machine. The final segment is The Simpson Family Smile-Time Variety Hour, a variety show featuring the Simpson family except for Lisa, who has been replaced. 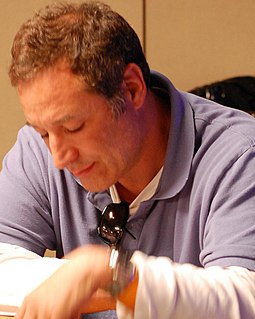 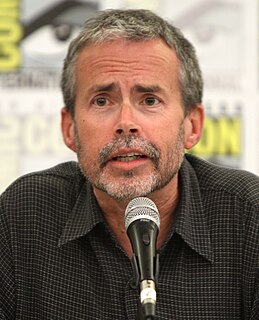 Michael Scully is an American television writer and producer. He is known for his work as executive producer and showrunner of the animated sitcom The Simpsons from 1997 to 2001. Scully grew up in West Springfield, Massachusetts and long had an interest in writing. He was an underachiever at school and dropped out of college, going on to work in a series of jobs. Eventually, in 1986, he moved to Los Angeles where he worked as a stand-up comic and wrote for Yakov Smirnoff.

John Frink is an American television writer and producer. He has written several episodes of the American animated sitcom The Simpsons, many of which he co-wrote with his former writing partner Don Payne. Frink and Payne started their career in television writing for the short-lived sitcom Hope and Gloria. They wrote their first episode of The Simpsons in 2000, and Frink still works on the show as a writer and executive producer.

Richard James Appel is an American writer, producer and former attorney. Since 2012, he has served as an Executive Producer and co-showrunner of Family Guy on Fox. He attended Harvard University and wrote for the Harvard Lampoon.

Jon Vitti is an American writer best known for his work on the television series The Simpsons. He has also written for the King of the Hill, The Critic and The Office, and has served as a screenwriter or consultant for several animated and live-action movies, including Ice Age (2002) and Robots (2005). He is one of the eleven writers of The Simpsons Movie and also wrote the screenplays for the film adaptions Alvin and the Chipmunks, its sequel and The Angry Birds Movie.

The Simpsons' twelfth season originally aired between November 2000 and May 2001. It began on Wednesday, November 1, 2000 with "Treehouse of Horror XI". The season contains four hold-over episodes from the season 11 (BABF) production line. The showrunner for the twelfth production season was Mike Scully. The season won and was nominated for numerous awards including two Primetime Emmy Awards wins and an Annie Award. Season 12 was released on DVD in Region 1 on August 18, 2009, Region 2 on September 28, 2009, and Region 4 on September 2, 2009. 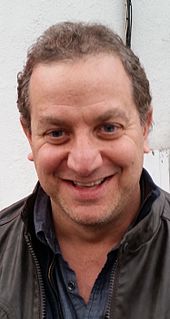