He was born in Dublin and educated at Wesley College and Trinity College in his native city [3] studying Mental and Moral Science (Philosophy) where he won a scholarship in 1948 and graduated in 1949. He was ordained in 1950. [4] He began his career at St Mark's, Dundela, Belfast. He was Chaplain and an Assistant Master at Portora Royal School, Enniskillen until 1957. He was a lecturer in philosophy at University College of St David's, Lampeter. He was Rector of Rathmichael Parish, Shankill, Dublin and a lecturer in the philosophy of religion at the Church of Ireland Theological College, Dublin. From 1969 to 1970 he was Dean of Ossory when he was ordained to the episcopate as the last Bishop of Limerick, Ardfert and Aghadoe, a post he held until 1976. He was translated to the Diocese of Meath and Kildare and he served there until 1985 when he was elected Archbishop of Dublin and Primate of Ireland. He retired in 1996.[ citation needed ]

Donald Caird took a keen interest in the Irish language from an early age. He encountered members of Cumann Gaelach na hEaglaise (the Irish Guild of the Church) at an Irish language service in Dublin's St Patrick's Cathedral in the early 1940s, which made a deep impression on him. Around this time, he was sent to the Gaeltacht in West Kerry by his father to improve his Irish, staying in the Dún Chaoin area and was fascinated to encounter members of his church community worshipping in Irish at a small church at Kilmalkeader (Cill Mhaolcheadair) on the Dingle peninsula, overlooking the Atlantic. He was appointed to Bord na Gaeilge, the state body for the promotion of the language, in 1975 while Bishop of Limerick, by Tom O'Donnell TD, Minister for the Gaeltacht. [5]

Events from the year 1935 in Ireland.

Walton Newcombe Francis Empey is a retired Church of Ireland bishop. He was formerly the Archbishop of Dublin. 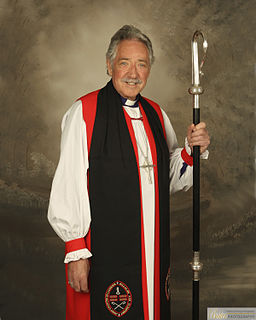 Trevor Williams is the former Bishop of Limerick and Killaloe in the Church of Ireland.

John Winthrop Crozier was the ninth Bishop of Tuam, Killala and Achonry from 1939 to 1957.

Donal Brendan Murray was the Roman Catholic Bishop of Limerick from 1996 to 2009. He had previously served as an Auxiliary Bishop of the Dublin diocese

Samuel Greenfield Poyntz was an Irish bishop and author in the last third of the 20th century.

Alan Alexander Buchanan was an Anglican bishop in the second half of the 20th century.

Maurice Evan Stewart was an Irish Anglican priest. He was the Dean of St Patrick's Cathedral, Dublin in the Church of Ireland in the last decade of the 20th century.

Maurice FitzGerald Day (1816–1904) was a Church of Ireland bishop in the last quarter of the 19th century.

Charles John Dickinson (1792–1842) was an Anglican bishop in the Church of Ireland and Privy Councillor. Born in Cork in August 1792, he was the son of Charles Dickinson, a brazier, and educated at Trinity College, Dublin, where he obtained scientific and classical prizes, and was in 1813 elected scholar before being ordained in 1818. At Dublin he was close a friend of Charles Wolfe and Hercules Henry Graves (1794–1817), brother of Robert James Graves. His tutor, Thomas Meredith, "reckoned by many as the best lecturer and tutor of his time in college, was so impressed with the manly talents of his pupil (Dickinson), that he urged him to direct his thoughts to the Bar, as the certain road to speedy and high advancement". Nonetheless, he pursued a career in the church and his first post was at Castleknock after which he was Chaplain of the Dublin Female Orphan Home. In 1832 he became Chaplain to the Archbishop of Dublin and the following year the incumbent at St. Ann's Church, Dawson Street. He became Bishop of Meath in 1840 and died in post on 12 July 1842.

Kenneth Arthur Kearon is an Irish Anglican bishop. He is the incumbent Bishop of Limerick and Killaloe in the Church of Ireland.